While the TDX has been reviewed many times, there has not been very many instances featuring this block with its fairly recent Socket-775 hardware. I’ve been running several Socket-775 systems with the TDX, and it’s done well with a P4 530 (3.0GHz), and 540 (3.2GHz). I’ve been elated with the new (BGA) Prescott, and most of the issues plaguing the early Prescott for Socket-478 were prematurely attribued to the processor’s design. Humorists (myself included) took advantage of the CPU’s perceived weaknesses such as the pipeline depth which even I claimed, “…only a spelunker could appreciate,” and, “…only a volcanologist could endure the heat.” In many cases the heat signature was misdiagnosed as Socket-478 PWM (motherboard power circuitry). Temps were the result of motherboard power circuitry designed for a completely different processor, with different power requirements. While Prescott uses less voltage, its increased transistor count requires higher current (amperes). These scenarios were the inspiration for articles at [H]ardOCP such as Prescott Tweaks Dangerous. Nonetheless, these issues have been resolved with the introduction of the Socket-775 platform, and Intel Fab yields seem to be outstanding. Every Prescott I’ve owned has been an excellent overclocker, and I’m sure the P4 550 we’re running today will not disappoint. Let’s take a look at our test setup. 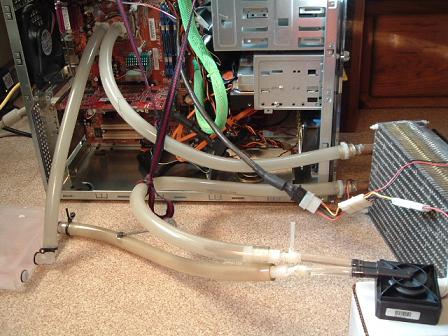 While this may be an ergonomics nightmare, there’s a method to the madness. Placing components externally from the case eliminates the temperature differential between internal case temp, and room ambient temp. Additionally the components being tested are easily accessible, and measuring decibel levels from the pump (for example) becomes less complicated. If this review pertained to a watercooling system, then ergonomics would take precedence over convenience. Looking at its diminutive size in the photo above, it’s hard to imagine the DDC-12V pump offers approximately twice the head to feet pressure of the Hydor L-40 with 7 x less the flow rate! Below the TDX installed on the Abit AA8. 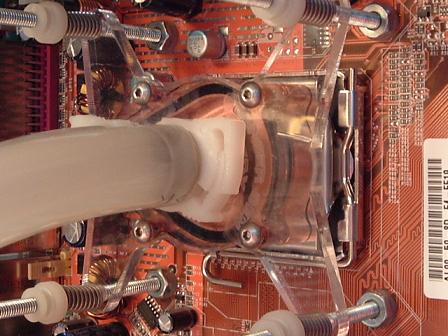 Danger Den has paid close attention to their waterblocks baseplate finish. Not to imply there was ever a problem in this area; however, I’ve seen a marked improvement since I originally tested their Maze-4 Powerkit just over a year ago. 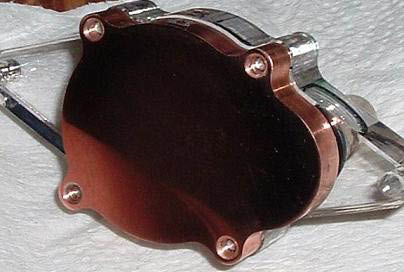 In the photo above the A64 socket is installed. To digress briefly, baseplate finish can be a deception. Of course you want to see a quality finish, free of micro-pores, and striations which will inhibit thermal transfer. A mirror image is not necessarily evidence the base is flat. Just about any surface can be “polished,” but we require a surface which is as flat as possible. Its critical the CPU and waterblock make full contact, thus assuring maximum heat transfer takes place. I’m happy to report Danger Den shares this view. To measure processor temps, I place a thermistor from a TTGI-USA Fan Master SF-609 as close to the center of the P4’s IHS (Integrated Heat Spreader) without adversely affecting contact between the block and the CPU. I repeat this process several times until I find the best placement (highest consistent temp readout).

In order to coax the processor to generate a maximum amount of heat I ran Prime95 under Toture-Test mode choosing Small-FTT’s option. I’ve noticed the processsor rapidly achieved (3-5 minutes) a maximum temp running Prime95 and looping the program for extended periods of time failed to raise CPU temps any further. I measured water temperature using a crude but effective method, which involves inserting the probe from a Cooper Instruments 1246-01 calibrateable thermometer through the 1/2″ tubing and centering the probe so it’s not making contact with the tubing sides. Finally, the Abit AA8 features uGuru utility, based on a Winbond microchip and providing a wealth of data through Abit EQ software. Specifically designed for Abit, the controller microchip provides features which were once accessible only in the BIOS, or with specialized programs such as ClockGen. The screenshot below exemplifies temps running under Idle, at default speeds (3.4GHz), and at default Vcore (1.385V) for the P4 550. 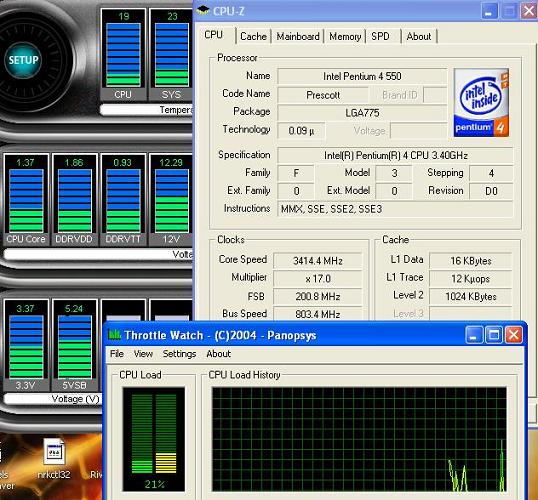 Included in the screenshot above is the Panopsys freeware utility Throttle Watch, which monitors thermal throttling (TM1/TM2) in real-time on Pentium-4, Xeon, and Pentium-M processors. The utility provided empirical evidence that Disabling Thermal Throttling in the BIOS cannot deactivate what is an integral piece of Intel Penitum-4 processor architecture. Our next screenshot below shows the extreme opposite of the Idle/default environment above, running the P4 under Prime95 LOAD, overclocked to 4.0GHz (240FSB), and at 1.435Vcore. 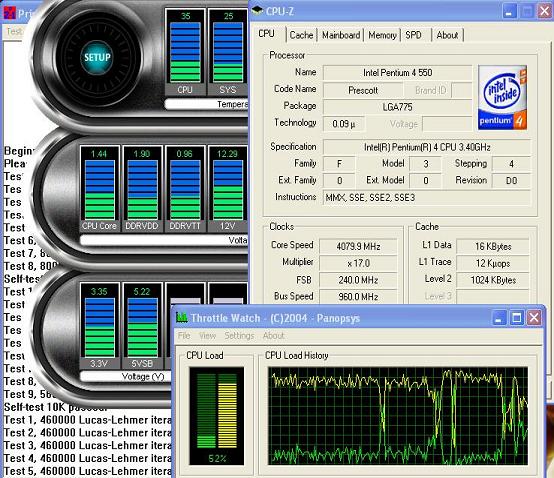 From the temps above it’s apparent Danger Den’s TDX, when mated with the right ancillary components, is a high performance waterblock. If we insert the values for the Pentium-4 550 (given the conditions above), at Benchtest.com’s Overclocked Wattage calculator, the approximate value is 155W. Unfortunately, the utility only covers the P4 3.06 manufactured on .13-micron. A CPU manufactured on .09-micron would most likely generate higher wattage (not to be confused with SSOI which is supposed to reduce leakage, hence lower temps). On to our charts:

My highest 3D stable overclock brought me to 4.2GHz (250FSB). Unfortunately, the Abit AA8 doesn’t allow (nor does any i915X/i925X mobo to my knowledge) the ability to lock the PCIe bus. While these unlocked bus speeds (120MHz at 250FSB) may damage a graphics card after prolonged use, it’s not necessarily excessive. Nonetheless I was unable to run the system Prime95 stable no matter the Vcore while at 250FSB. Of course given the P4’s design, excessive Vcore may conflict with an innate P4 architectural feature known as D-VID. There’s an excellent article titled Intel Prescott Info at IAmNotAGeek.com and I’ve provided the link (title) to the page discussing D-VID. Regardless, at lower Vcore settings I was able to run my P4 550 to 4.2GHz, fully 3D-stable as seen below. 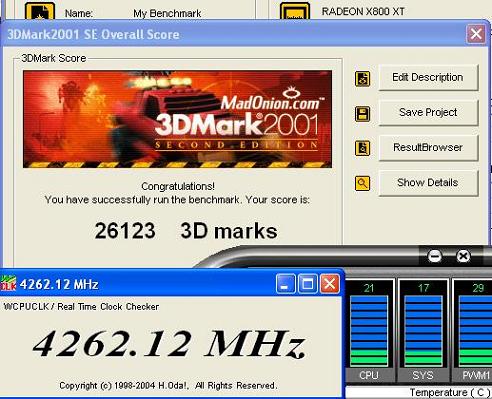 Conclusion: Danger Den has remained consistent in their timely expansion of mounting hardware for the TDX waterblock. My only word of caution/complaint is the area on the barbs where a wrench would be used to tighten the fittings (inlet/outlet) sits recessed, obscured by the lucite mount itself. Be sure to check the barbs to ensure their tight prior to installation. If the leak is slow enough (as mine was), 24hrs of testing outside of the case may not catch this. Luckily, distilled water saved me. Beyond this oversight on my part, Danger Den has provided Socket-775 owners with an excellent cooling solution for the higher wattage of recent .09-micron Pentium-4’s. It’s rumored the P4 570J may be the last in the Pentium-4 line of processors, and for those wanting to tame the beast, they need look no further then the TDX tested today. I’ve no doubt given the performance seen in the tests above, the TDX could have taken us much further if more BIOS adjustments were available. I’d also recommend Danger Den’s new DDC-12V Delphi pump ($74.95). Not only is the decibel level practically non-existent, its pressure is more then adequate for the TDX. MSRP for the TDX is $52.95 at the Danger Den Store. Highly recommended! I would like to thank Dano at Danger Den.