Danger Den based in Oregon, has been producing quality waterblocks for several years now. The company is unique in that they’ve bridged the gap between independent waterblock designers, and larger entities such as PC-Koolance. With all due respect to the latter, more experienced watercooling enthusiasts felt such designs often fell short on performance compared to niche builders. Danger Den started as a small mid-to-high performance waterblock maker, growing one block at a time into one of the largest manufacturers in the business. Perhaps one of their more innovative contributions was offering kits specifically designed to introduce people to cooling with H20. Their Maze-4 Powerkit, costing approximately $199, contains everything required to begin cooling your CPU in style. My very first kit was the Maze-4 Powerkit, and it completely metamorphosed my enthusiast PC experience. Watercooling offers as many options as a processor has transistors, and now even watercooled PSU’s are becoming commonplace. Let’s take a look at the block were testing today, the TDX. 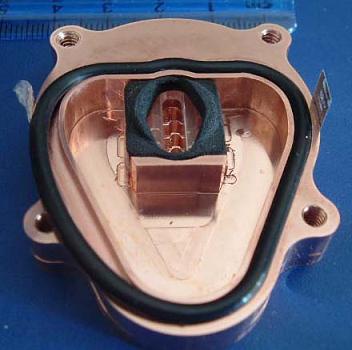 Danger Den’s TDX is a waterblock with a past. It’s considered the offspring, or the evolution of another well designed Danger Den waterblock, the RBX. Both these copper blocks share a highly effective impingement design based on isolation cups or as Danger Den describes them “heat voids.” The heat voids are staggered along channels machined into the block’s impingement zone, which of course is centered above the CPU core (ideally). The cup’s machined depth leaves just .5mm of copper between water flowing through the block and CPU surface. As water enters the block via the inlet centered over the impingement zone, it passes through another Danger Den innovation: their accelerator nozzle. This device determines the type of water flow down into the heat voids which help perpetuate turbulance. This is the designer’s intent, as the turbulance within the copper “isolation cups” (heat voids) assures thorough heat absorption occurs. Below we can see the impingement zone, with its isolation cup aka heat voids staggared along their channels. 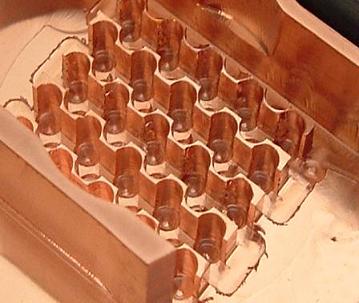 In waterblock design, flow characteristics are just as important to performance as the type of impingement zone. In the photo above we can visualize how water flowing down into the impingement zone would then be forced out (by continual water pressure) by the channels. This amount water pressure involved in this process is relative to the term head to feet, or a pump’s height. This basically describes a pump’s pressure, and there are many theroies as to the required pressure with respect to different impingement/flow designs. Suffice it to say a specific amount of pressure will be required to force the water down into those heat voids generating adequate turbulance. Once the water has absorbed the heat from the processor, the channels (as their name implies) guide the now heated water into the block’s outer chamber. From the photo above it’s easy to misinterpret what would contain and guide the water in this impingement area. The photo below, which shows the accelerator nozzle installed, clarifies how the design comes together.

Hopefully my explanation has clarified, not only the effort which went into designing the TDX, but the subtleties involved in hydro- and thermodynamics. Where pressure is concerned in your system the pump is not alone. Several factors dictate system presssure: the pump, design of the block (flow characteristics), number of blocks, tubing diameter, angles in, and length of, tubing. Danger Den has mated many of their pumps with 1/2″ ID tubing. This is considered large by some standards, and in European waterblock design you’ll often find 1/4″ ID tubing. Recently, Danger Den has added a high-pressure DC compact pump to their catalog, the DDC-12V. I’ve just finished testing this pump and it’s simply amazing. Originally, this review was to feature the Hydor L-40, which is a very high flow pump at 2800l/h; however, its height was just 7.5Ft. The DDC-12V offers a flow rate of just 400l/h; however, it’s height is an amazing 14Ft. Since this will be the pump used today I’ve included a pump-curve chart as supplied by the pump’s original manufacturer LAING which named the pump Delphi. 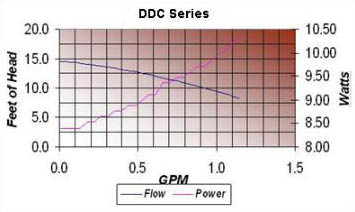 For the rest of our test setup: