Intel says that the Intel NUC KIT NUC6i7KYK doesn’t need an add-in graphics card for amazing 3D graphics performance, so we put those claims to the test! We used Intel Graphics Driver version 15.40.23.4444 for Windows 10 to do our testing with. These drivers came out on April 29, 2016 for the 6th Generation Intel Core i5/i7 processor series.

This game title uses the Frostbite 3 game engine and looks great. We tested Battlefield 4 with the medium graphics quality preset . We used FRAPS to benchmark with these settings on the Shanghai level. All tests were done with the DirectX 11 API. 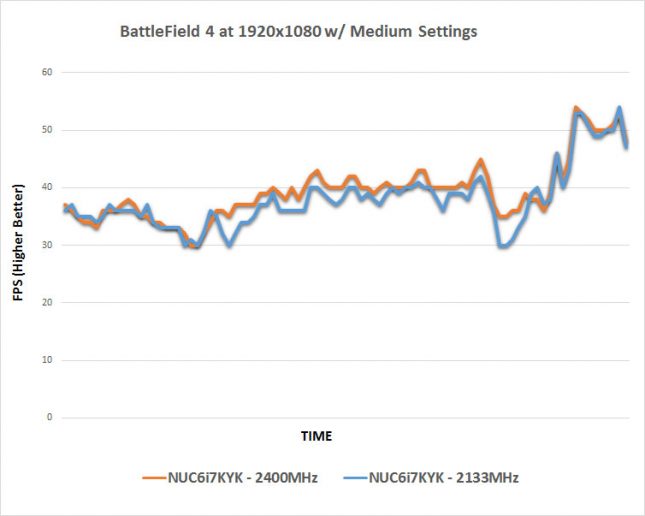 Benchmark Results: Average FPS performance went from 37.9 FPS with the kit running 2133Mhz with CL14 timings to 39.4 FPS with the kit running its default speed of 2400MHz with CL14 timings. This is a 4% performance difference, but keep in mind this test is GPU heavy as we are running medium IQ settings at 1080P. Is running a 2400MHz kit over a 2133MHz worth it? It is if you want to get the very best performance. The performance difference between the Kingston and Crucial 2400MHz kits was less than half a FPS.

The good news for Crucial is that we were able to run this kit manually at the same tight timings used by Kingston’s 32GB 2400MHz DDR4 SO-DIMM kit without any issues.

With the same exact timings run on both kits we can see Crucial Ballistix Sport LT 32GB 2400MHz SODIMM kit was able to perform at a higher level in some of the benchmarks and it just so happens to cost $80 less! We wouldn’t call the performance differences major with the same timings being run, but the price difference certainly is.

We tried overclocking the Crucial BLS2K16G4S240FSD memory kit by manually increasing the memory divider to 20 in the UEFI and the system failed to post with looser CL18 timings and higher 1.35 V settings. It looks like 2400MHz is about all this kit has in it on this particular system!