If you are looking to build a new system using the Intel X99 platform you’ll be needing a kit of DDR4 memory. It looks like most enthusiasts are looking for more performance than what the so-called “standard” kits that feature 2133MHz clock speeds. Desktop DDR4 memory kits are already available in speeds ranging from 2133MHz to 3333MHz, so you can easily go with a kit featuring faster clock speeds if you wanted to open that wallet a little more. Other than clock speed you also need to know how much memory that you want to go with.  Most all quad-channel DDR4 memory kits are 16GB (4 x 4GB) or 32GB (4 x 8GB) and down the road we expect to see some 64GB kits (4 x 16GB). So, when it comes to what memory kit to go with your Intel Haswell-E platform you’ll quickly find that there are dozens of kits out there. Crucial recently announced that they have come out with enthusiast-class Ballistic Sport DDR4 modules that offer increased bandwidth over your traditional ‘value series’ DDR4 memory kits. The kits also look better thanks to the use of a integrated heat spreader and a black PCB instead of traditional green PCB that has been around for decades.

A 16GB memory kit will run you just over $208.99 and a 32GB memory kit will run you exactly $200 more, so you are looking at $408.99. Those are the standard kits with 2133MHz clock speeds, no heat spreaders and green PCBs.  For an additional $25 to $36 you can go from the basic Crucial memory kits to the Ballistix Sport line with 2400MHz clock speeds, heat spreaders and black PCBs. That extra cost isn’t that bad as many people would be willing to pay an extra 10-15% if a product looks better and there are significant performance improvements. 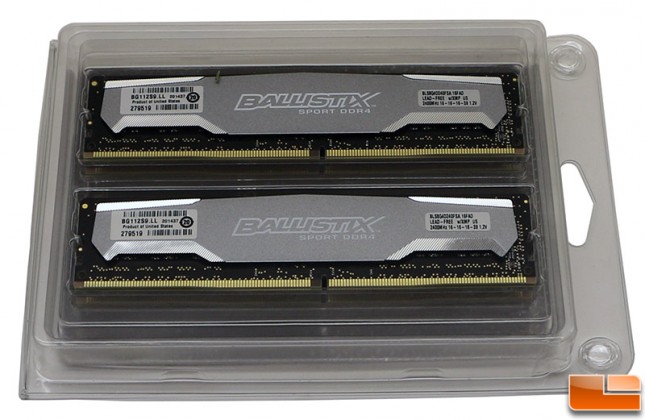 Crucial sent over the Ballistix Sport 32GB DDR4 2400MHz desktop memory kit that is sold under part number BLS4K8G4D240FSA. This memory kit runs at 2400MHz with 16-16-16-39 2T timings at 1.20V. Crucial didn’t do anything flashy with the packing on this memory kit as it comes in a sealed clamshell with a paper insert inside. 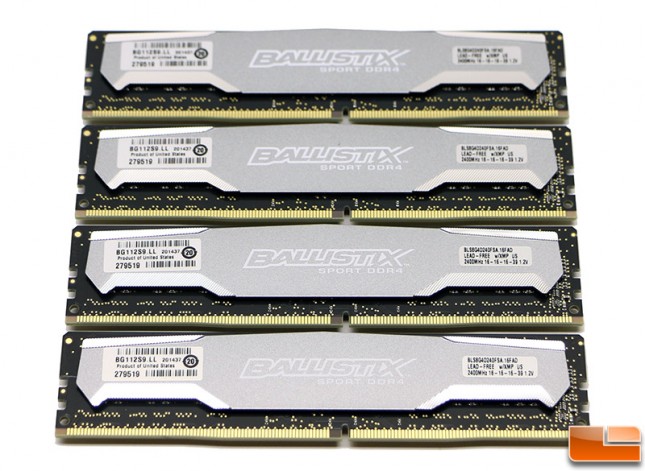 Crucial also didn’t redesign the heat spreader on the Ballistix Sport DDR4 memory kits, so it’s the same one used on the Ballistix Sport DDR3 memory kits with the exception being the color. Instead of being black the marketing team and designers went with a grey finish on the heat sperader. The last time we talked to Crucial they hinted that a new heat spreader design might be in the works, but it won’t likely be this year. DDR4 memory kits use only 1.2-1.35V and don’t get too hot, so the heat spreader is mostly for looks and not really function. We’ve run some memory kits here on the test bench at Legit Reviews over 3200MHz without a heat spreader whatsoever, so we can confirm that they are purely cosmetic on a kit like this.

Both sides of the Crucial Ballistix Sport DDR4 memory kit heat spreader are the same, so it will look good no matter what direction you are looking at it. The grey heat spreaders do look good with the black PCB and should go with most any PC build that you are working.

One of the labels on the back side of the module lists the timings, voltage, clock speed, part number and that this kit features an XMP 2.0 memory profile. This might come in handy down the road when you have several kits and need to make sure you have the right modules together. 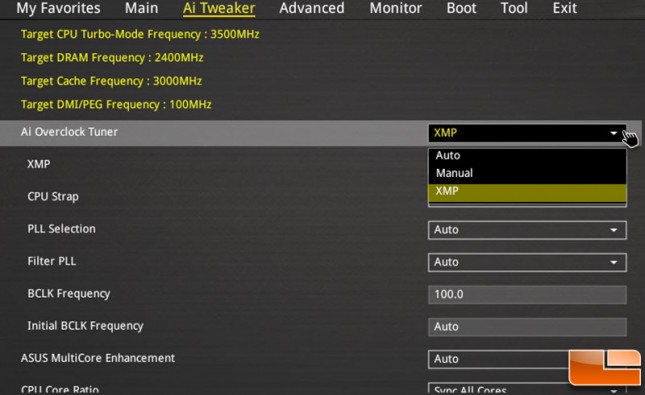 Having Intel XMP 2.0 memory profiles is always nice addition to any memory module. You just need to go into the UEFI and enable the XMP profile and the board will automatically make all the needed changes for the memory kit for it to run at the advertised speeds. If you don’t do this you’ll be running at JEDEC default speeds, which isn’t what you want to do with an enthusiast overclocking memory kit. You can also set everything up manually if you are comfortable going into the UEFI and finding what settings to change and making the appropriate modifications. 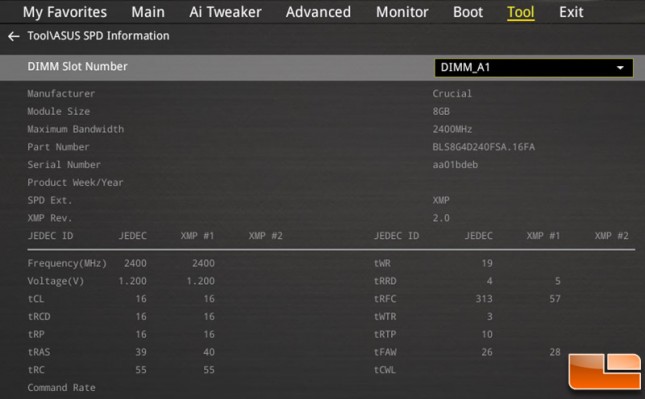 Crucial did some interesting things with the Intel XMP 2.0 settings as you can see from the ASUS SPD Tool on the ASUS X99 Deluxe motherboard in the screenshot above. The kit has 2400MHz clock speeds on both the JEDEC and XMP #1 profile settings. The timings between the two are also slightly different as the tRAS and several advanced timings are shown as being different. This is the first DDR4 memory kit that doesn’t have 2133MHz speeds for the base JEDEC profile, so it looks like Crucial is confident that no board on the market will have issues posting at 2400MHz. Crucial didn’t program an XMP #2 profile on this memory kit, so those values are blank.

Now that we know the basics about this memory kit we can take it for a test drive and overclock it to see how much faster and tighter we can get it.