Cougar used quality materials and made excellent component selection throughout the Revenger S and the build quality of the mouse is pretty solid. The Cougar Revenger S has a symmetrical shape that curves well into the hand while thinning in the middle to allow for inward grip, though this style might not be favorable to all. Cougar has implemented the Pixart 3360 sensor properly on the Revenger S, as it tracked precisely and never spun out or had any erratic sensor movement to report. With properly implemented independent main buttons, the Cougar Revenger S was very capable and consistent during gaming sessions and I was able to quickly get used to the mouse coming from my Logitech G903. The Cougar UIX software works well and allows for quite a bit of adjustment and control over the Revenger S, with no major issues or bugs to report. In terms of gaming capability, the Revenger S is top notch, while it is also totally capable as a daily driver mouse thanks to its expansive feature set and comfort level for medium to large handed users.

Cougar has a few things to address with the next revision of the Revenger. While the overall build quality of the Cougar Revenger S is solid, the side buttons are a weak point. There was just not enough tactile response on the side buttons, in addition to the fact that they were just too small and hard to press, for me to be truly impressed with the Revenger S. The rubber side grip material that Cougar is using on their current mice, while providing fair grip and comfort levels, is not a material that I am a fan of. Cougar is trying to market the validity of real rubber side grips, but the truth is that these grips run warm and don’t grip as well as the less-textured grips on mice like the Logitech G703. Besides the less-than-steller side buttons and average side grips, the scroll wheel on the Revenger S also stands out as average and the implementation leaves it susceptible to rattle. 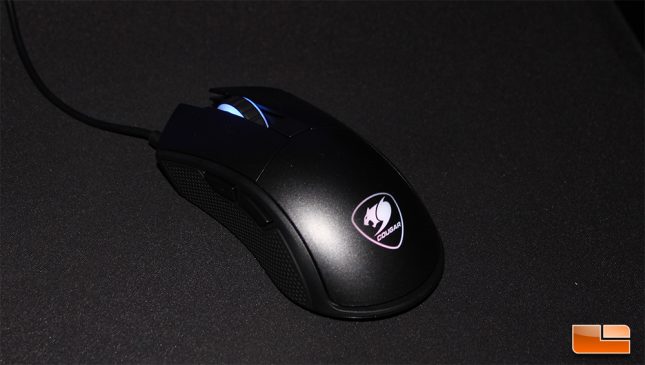 If you are looking for a larger mouse that is lightweight and capable of providing a consistent gaming experience, at just $44.20 on Amazon, the Cougar Revenger S is a solid choice. I would try and use the Revenger S before buying to see if the grip material is right for you, as this type of material is definitely not for everybody and it takes me a bit to get used to when coming over from mice that use lightly-textured materials. The Cougar Revenger S competes directly with mice like the SteelSeries Rival 310 ($54.99 on Amazon) and Logitech G403 ($47.18 on Amazon), both of which also feature similar button layouts and sensor types. The Cougar Revenger S is right on par with the Rival 310 and G403 in terms of performance, but it doesn’t outperform either mouse or lead in any particular category that makes it stand out. The 2000Hz polling rate of the Revenger S is a unique feature that the other mice aren’t capable of, but that feature just is so trivial that it may not matter. I guess the takeaway is that I am comparing the Revenger S with two of the best wired mouse in the industry and it fits right into the comparison. Cougar has done a great job with the Revenger S and it competes well alongside mice like the Rival 310 and G403 while being properly geared for users with medium to large hands.

Legit Bottom Line: There are just a couple of issues that keep the Revenger S from getting an Editors’ Choice Award, but is a great mouse for competitive gamers with medium to large hands.