The Cougar Revenger S is a six-button, lightweight (96 grams) mouse that features a symmetrical shape, meaning it will feel similar when held in the left or right hand, though the button layout is specifically geared for right handed users. 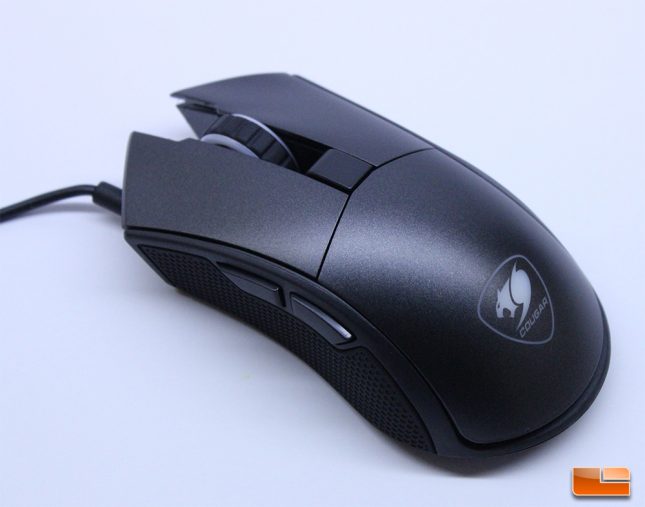 The shell of the Revenger S has a semi-gloss black finish that picks up fingerprints a bit when compared to other mice in my possession. At just 94 grams not counting the cable, the Cougar Revenger S is pretty light, which will allow for it to be used for fast paced, twitch shooters. Speaking of that cable, it’s very thin and light, with a reinforced area on the left front of the mouse that keeps things together while allowing for little resistance or drag. The Revenger S indents in the middle for grip, while moving outward towards the front and into the palm, which lends to a fairly interesting grip style. I found that palm grip worked great on the Revenger S, since the large rear hump area gave plenty of room for the palm to rest and moved outward to fill the palm area. Claw and fingertip grip worked well, though the rubber grips don’t hold as well as I would like when in fingertip grip. 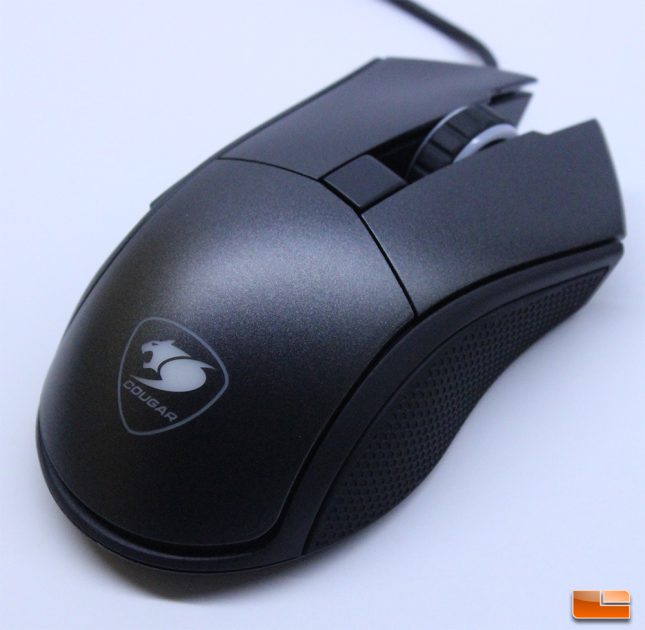 The Cougar Revenger S has independent main buttons, meaning that rather than the mouse having a single shell with both the left and right buttons integrated, each switch has an individual spring-loaded button sitting above it. I’ve grown to really appreciate the individual button design on mice, as individual buttons allow for more consistent clicks and longer-lasting mice, since the entire top of the mouse shell isn’t stressed with each mouse press. The Revenger S main buttons are done well and they don’t suffer from too much side-to-side play or lifting, an issue I’ve found with some mice that have individual main buttons that haven’t been properly integrated. Both the left and right button on the Revenger S offer a consistent, tactile response with very solid rebound and titter clicking is totally doable. The left click was just a hair softer than the right click on the Revenger S, but I tend to find that even the best mice sometimes will have inconsistent feelings between the main buttons. Overall, Cougar has done a great job of implementing the independent main buttons of the Revenger S onto the excellent Omron 50 million click rated switches, but there is just a little room for improvement in click consistency.

Cougar is using real rubber side grips on the Revenger S and they are the same exact design as on the Minos X5, meaning they grip well and feel decent, but can cause moisture build up since they run warmer and cause heat build up between the hand and mouse. The grips on the Cougar Revenger S hold well enough and are comfortable, but I can’t help but thing that going with real rubber grips for mice may not be the right idea since the material doesn’t feel the best and doesn’t grip as well as the non-patterned, basic grip of mice like the Logitech G703. 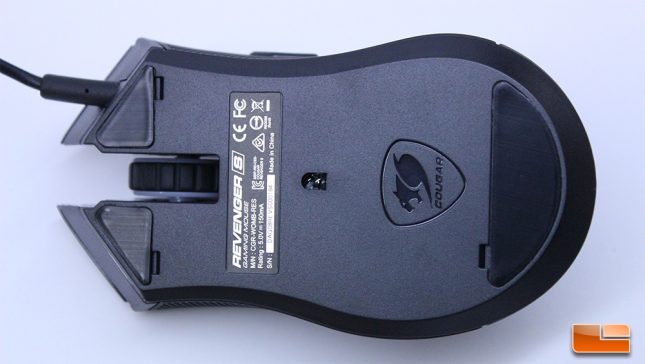 The Pixart PWM3360 is one of the best optical sensors on the market and is known for its precise tracking ability that isn’t mired by acceleration or jitter reduction in typical DPI ranges. The Pixart PMW3360 tracks well on both cloth and hard surfaces and is the sensor that Logitech and SteelSeries (3366 and TrueMove 3 are firmware-modified variants of the PMW3360) use for their best gaming mice. It looks like Cougar has implemented the PMW3360 properly on the Revenger S, with it properly balanced near the center of the mouse, which should lead to the most accurate tracking possible without bias towards front or rear mouse movement. The Revenger S has Teflon-coated feat on the upper front corner and rear of the mouse. There are slots on the bottom of the Revenger S to allow easy removal of the mouse feet for replacement.

Cougar UIX software is an 8.4 MB driver package for the Revenger S mouse that allows control over acceleration, angle snapping, DPI, lift off distance, polling rate, RGB lighting and more. Unfortunately, unlike other manufacturers, Cougar doesn’t yet have a unified driver software for all of their peripherals, so UIX must be downloaded for the Revenger S from the product page. The Revenger S has onboard memory, meaning that any settings for lighting, DPI, etc. can be saved and used independently of the program once they have been applied. 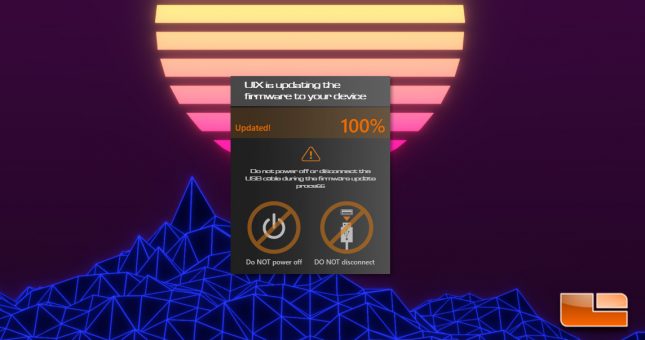 Before you can do anything, the Cougar UIX will let you know that a firmware update has to be completed. This firmware update goes pretty smoothly, but there is a brief period when it hits 100% where everything kind of freezes and your mouse goes offline for a moment before rebooting. Cougar had firmware updates for both the Minos X5 and Revenger S with the UIX software downloads, so chances are you will go through this process if you purchase a Cougar mouse. 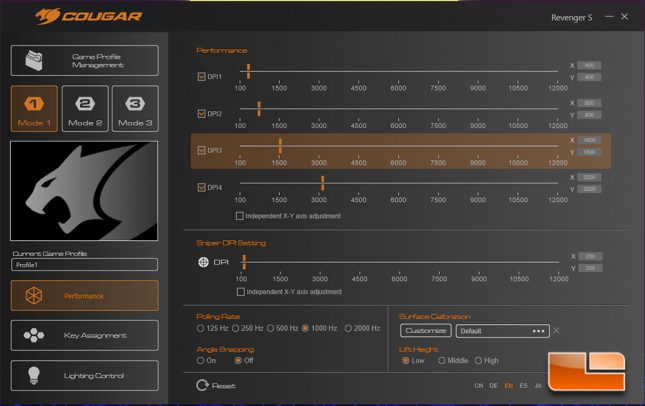 The main section of the Cougar UIX is laid out very sensibly, with four individual DPI ranges adjustable in the main section. Several profiles are available to be saved and toggled so that users can program the Revenger S to a variety of different button layouts and DPI settings. Polling rate on the Revenger S is set to a default of 1000 Hz. Angle snapping is available to adjust in the Cougar UIX and it is turned off by default. 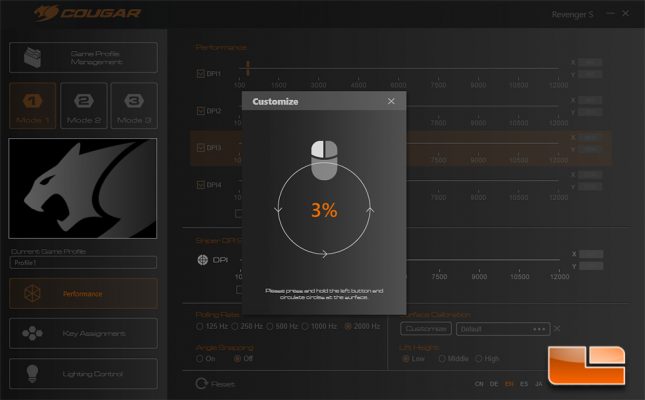 Surface Calibration and Lift off Distance adjustment is also available for the Revenger S in Cougar UIX, with surface calibration involving moving the mouse in a circle while the system analyzes the surface for a few seconds. 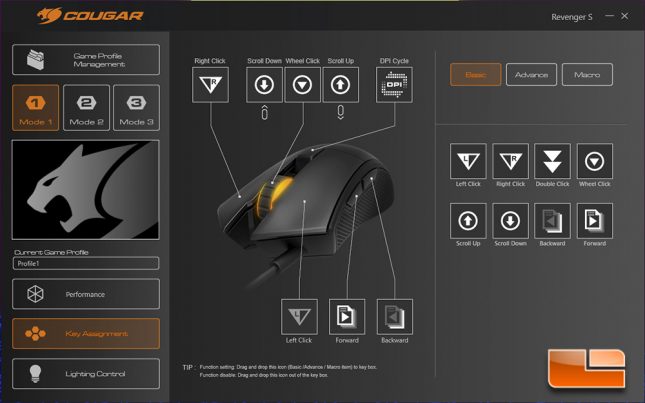 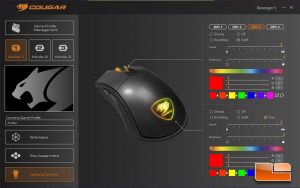 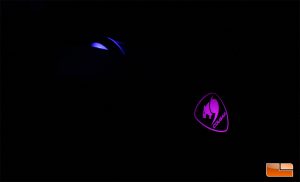 Extensive control over both RGB zones is available on the Revenger S through the Cougar UIX software. There are a few different animated modes, along with static modes available. I found the RGB lighting on the Cougar Revenger S to be really consistent, with smooth animations and properly diffused lighting.

Overall, the Cougar UIX software is excellent and does a great job of bringing value to the Revenger S. While the Revenger S is a well-built mouse with solid components, it’s software like Cougar UIX that truly allows it to shine, with each button being programmable and adjustment of settings like DPI and lift off distance being made simple. Hopefully, Cougar can eventually release a single UIX suite for their various products, as it was annoying having to install two pieces of software from the same manufacturer just to test a couple of mice. I know it seems like a silly complaint, but I can use pretty much any Corsair or Logitech mouse made in the past few years with the same piece of software.

For testing the Revenger S, I used my Coffee Lake 8700K system with Logitech G240 Soft Cloth and G440 Hard Surface Mouse Pads. The latest version of the Cougar UIX software (FW28) was installed for the Revenger S and this package included a firmware update for the mouse. Even with a monitor with a 1MS response time, the reality is that the Revenger S felt extremely smooth and adequate under both 1000 Hz and 2000 Hz polling rates and any possible differences between those modes were not perceived by myself. I can say that I didn’t notice any erratic behavior or increased CPU usage under the 2000 Hz mode and using it may give users peace of mind that their mouse is reporting as quickly as possible to the PC, so I’d say go ahead and use the 2000 Hz polling rate if it doesn’t cause any issues on your PC.

The Revenger S felt great in my hand and performed well in day-to-day use, offering smooth tracking and satisfying tactile response from the main buttons. The Revenger S glided very well on the included feet with either my cloth or hard surface mouse pads, as well. In game, the Revenger S was precise, offering excellent maneuverability thanks to its light nature. I was never able to get the Revenger S to spin out or lose tracking, even when lifting and slamming the mouse rapidly. The Revenger S truly feels at home in a fast-paced FPS environment, as it is lightweight and nimble. I found the default lift-off-distance of the Revenger S to be perfect and never needed to adjust it using Cougar UIX. 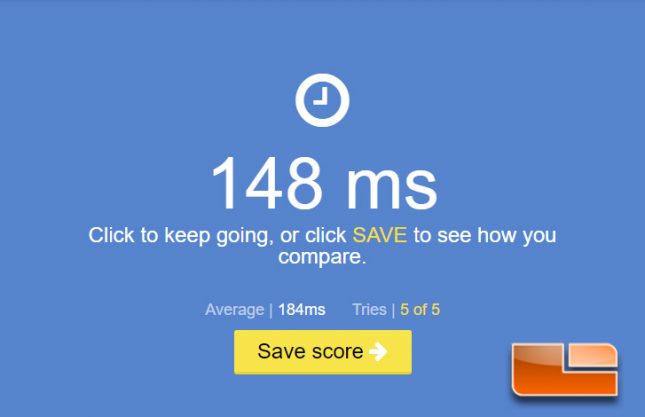 Input latency on the Revenger S was as good as any other mouse I’ve tested, averaging slightly under 200ms during five runs of TheHumanBenchmark, a reaction time test. The HumanBenchmark is subject to variance since it tests human reaction time, I merely use the test to detect any mice for abnormal input latency that may affect gaming.

The build quality of the Revenger is is pretty solid, though the side button consistency and tactility of the scroll wheel can be addressed. The Revenger S exhibits next to zero rattle when shaken, with only the scroll wheel giving off any noise during the shakedown test. The buttons all hold well and don’t rattle, even with the mouse turned upside down. Overall, the build quality of the Revenger S is great and the mouse feels really solid and high quality underneath my hand, allowing it to be used perfectly as my daily driver during the testing phase. I didn’t end up moving the Revenger S to full-time duty, since it just didn’t quite have the feel and tactile response I’ve come to love from my G903, but the Revenger S definitely is no slouch, especially at its current $45 price point.

Let’s wrap up this review and see how the Cougar Revenger S stacks up to the competition on the next page.