Corsair One Pro 1080 Ti Use and Performance 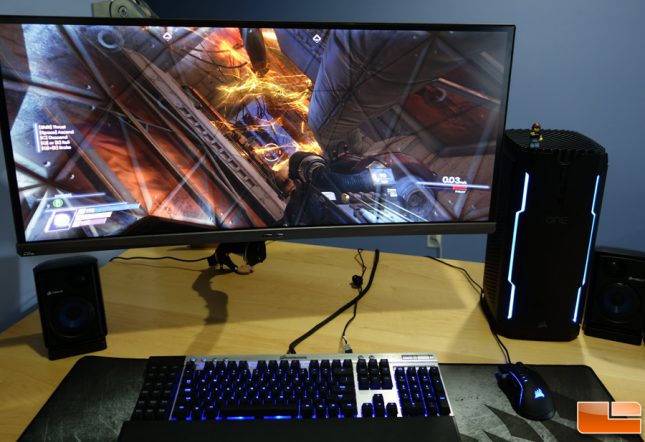 Being limited on time before the launch, I decided to forgo the usual suite of benchmarks because really, the Corsair One Pro 1080 Ti is prebuilt with very little available variation from the factory so performance is going to be consistent from machine to machine and benchmark metrics as published by Corsair shouldn’t be any different that results I would get. I’m sure they’ll be prominently featured on their product page on launch day. Plus, not having a comparable fresh competitor system on hand would only provide results in a vacuum which isn’t very informative and probably not the best use of my time.

*edit* we had a little more time to spend with the system after the launch so ran a few passes of Cinebench. One at stock speeds and another by choosing gaming mode in the BIOS which kicks up the CPU to 4.6GHz as opposed to the 4.5GHz max from the built-in turbo. While not a huge increase in stock turbo speed, it did make a difference in the benchmark results and even complete noobs can click a single setting and squeeze out a little extra processor speed than what Intel gives you by default.

Instead I put it through some heavy duty gaming (ok, probably not a productive use of my time either) to see if I could perceive any weaknesses or other issues, especially in the area of thermal performance.

But first, the less exciting part – software utilities! As mentioned, no crap-ware onboard by default (though I guess that’s somewhat subjective) other than the normal Windows components with maybe a minor exception and this is where the subjectivity comes in. Pre-installed is Corsair’s version of PC Doctor which, for a veteran PC user, is not all that helpful. It basically provides information about the system specifications and alerts you to things like how you haven’t made a backup recently and let’s you know you have virus protection installed. Hey, thanks for the assist. If you look close enough, in the application settings there’s an option (enabled by default) to allow online access and as a sub-option, a “download special offers” election. Ugh. At least it gives an opportunity to opt out. So, while some less savvy users may find the features useful, it’s generally information that’s already available in Windows if you know where to look, or via a less intrusive program like CPU-Z. The only thing that might give owners pause from uninstalling it altogether is that it may be the best method for sending Corsair detailed system information should any issues be encountered. Likely the first question a phone technician will ask is if the user can run a diagnostic from the software so bear this in mind when eyeballing the uninstall button. 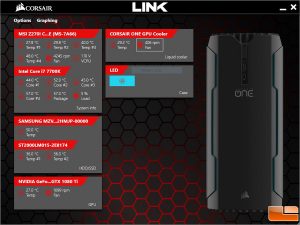 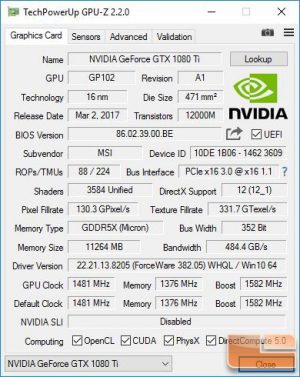 In addition, the One Pro does come with Corsair Link software pre-installed which is much more handy as it’s main function is controlling the cooling and providing access to configure the exterior lighting. The latter is simply brightness (including off) and a choice of breathing, static, or flashing patterned lighting. By default the cooling (fan/pump speed) is already optimized for a balance of cooling and low noise so really no reason to muck around there but you can do so if compelled or if going for heavy OC. Clicking on the various metrics bring up more detailed info in the form of graphs and such. As evidenced by GPU-Z, the mighty NVIDIA GTX 1080 Ti is on board and ready to tackle your 4K gaming session.

As you can see, CPU-Z does indeed give you just about every system hardware specification that matters should you be so inclined to look.

Now as to the gaming and thermal performance. I used MSI Afterburner to monitor temps for both the GPU and CPU during gaming on both a 4K monitor (well, near so at ultrawide 3440 x 1440) and also gaming on Oculus Rift. On the ~4K side, I ran Prey on the “very high” preset for roughly a half hour and at an ambient room temp of 21C and on Oculus I ran Arizona Sunshine (zombie shooter fans, pick this one up) with the same ambient temp. I had my wife play the part of Oculus gamer so I could observe the system under load. The results are below with temperatures expressed in Celsius and for the CPU I chose the core with the highest temp for the start, max, and average.

Pretty good temps all the way around though the 74 CPU temp is getting at the top of the warm scale and entering hot. However, keep in mind this was the max temp and still well within the tolerable range for a Kaby Lake processor. Also, there have been reports of high temp spikes with these processors for no apparent reason so bear that in mind as well. I’d say without tweaking the cooling, there’s still headroom for some modest overclocking on both the CPU and GPU and likely even more if you are willing to put up with some extra noise and are willing to play with the cooling settings. While on the subject of noise, while at idle the system is super quiet with Corsair reporting a measly 20 dBa as measured from three feet away. Even sitting on the desktop within a few feet, the fan/pumps noise was barely audible with other room ambient noise (i.e. HVAC). At full load, the noise did pick up but definitely nothing I would consider annoying or out of line, especially if kept under a desk. Couple that with audio from speakers or headphones and fuggedaboutit. I actually use the same ML140 fans in my system specifically because of how quiet they are while still pushing a decent amount of air. I’ve had numerous water cooling setups over the years (including a few from Corsair) and many of them produced pump whine or random gurgles but I heard neither out of the One Pro the entire time I used it.