The Corsair iCUE Elite Capellix Liquid CPU Coolers offer low-noise performance while emphasizing aesthetics with RGB illumination. They come with Corsair ML RGB PWM fans with 8 RGB LEDs each and 33 Ultra-bright Capellix LEDs on the pump head. Using the included Corsair iCUE Commander CORE and the Corsair iCUE software, users have a lot of flexibility to create their own lighting themes and effects. This also allows for synchronized RGB lighting across multiple Corsair devices, fan adjustments, and Zero RPM mode on up to six fans. 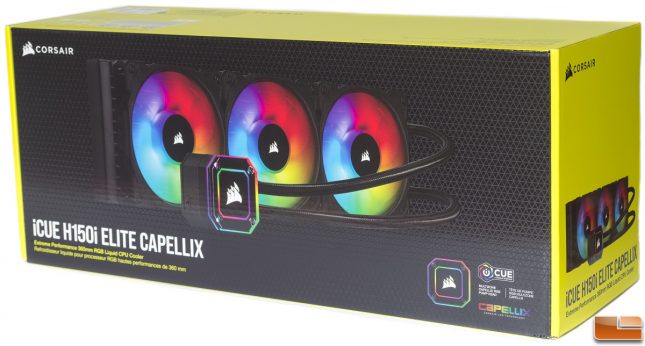 Opening up the box, there is a quick start guide and a warranty guide booklet. These two booklets sit on top of a white foam cover that protects the other accessories inside the box. 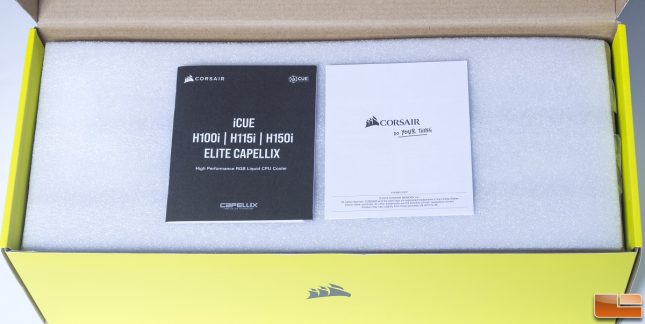 Removing the booklets and the white foam cover reveal the water-cooling unit and its accessories nicely wrapped inside of a clear plastic bag. Everything is packed in a cardboard cutout, which protects the components from minor damage during shipping. 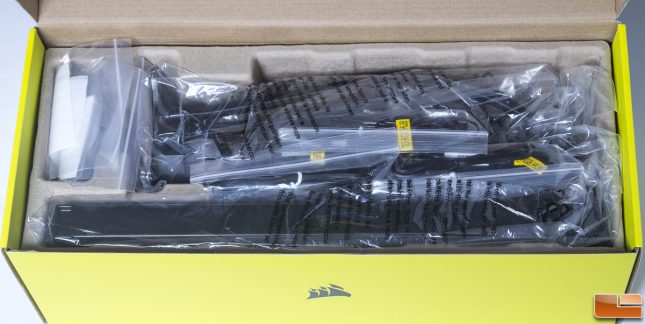 In terms of accessories, we have a variety of solid mounting hardware for various AMD and Intel sockets in labeled bags. Three ML120 RGB Series fans are also included along with the iCUE Commander CORE and a clear alternative cap for the RGB module on the block. 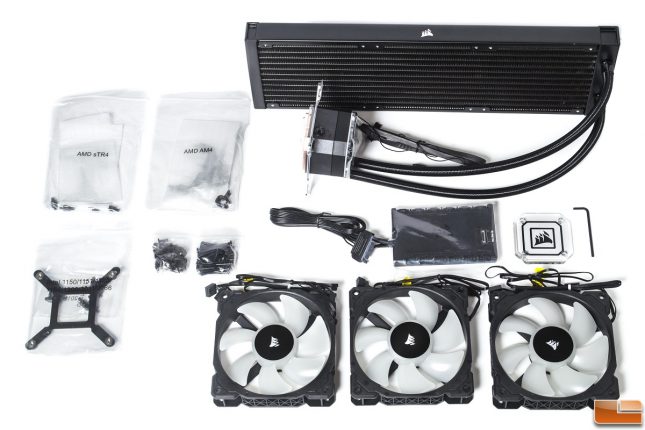 These ML RGB Series PWM 120mm fans are fully adjustable from 400 RPM to 2,400 RPM. They also have eight RGB LEDs per fan. Even at 2400 RPM, the fans still produce a respectable noise level of 36 dBA. 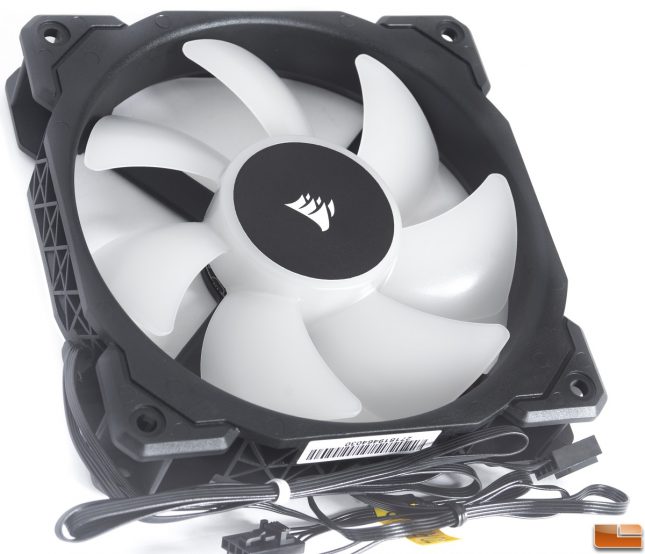 The radiator is the same as the H150i RGB Pro XT and measures in at 397mm x 120mm x 27mm. The only physical difference is the company logo as it no longer contains the Corsair text. The thickness is pretty standard, which should not cause any interference with memory modules in most computer cases. It does have 12 rows of fins, which is more than adequate to allow the airflow to pass through the radiator without restriction. 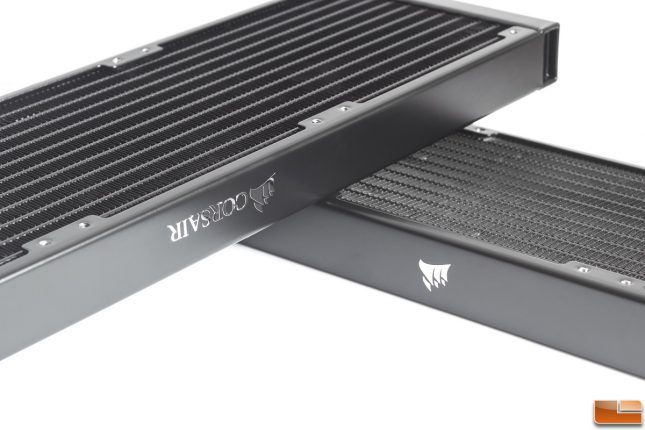 Two cables from the water pump include a proprietary connector for data, and the other for the pump speed sensor. 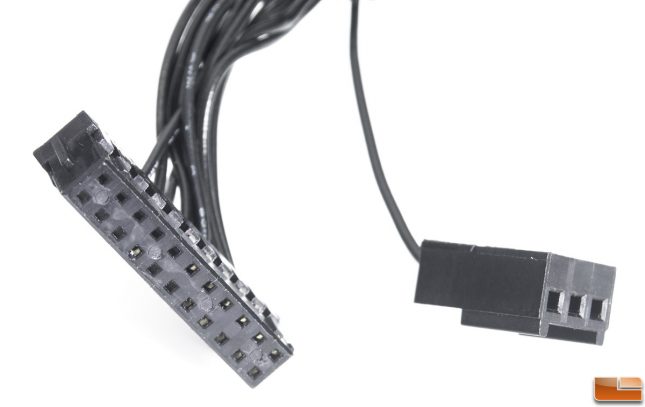 The surface of the water pump is mainly glossy with the pre-installed dark alternative cap. Everything below the cap is a matte black finish. The logo and the white LED ring around the logo do illuminate when the pump is powered on. Both the logo and LED ring are RGB capable thanks to the 33 ultra-bright Capellix LEDs with 21 customizable zones. 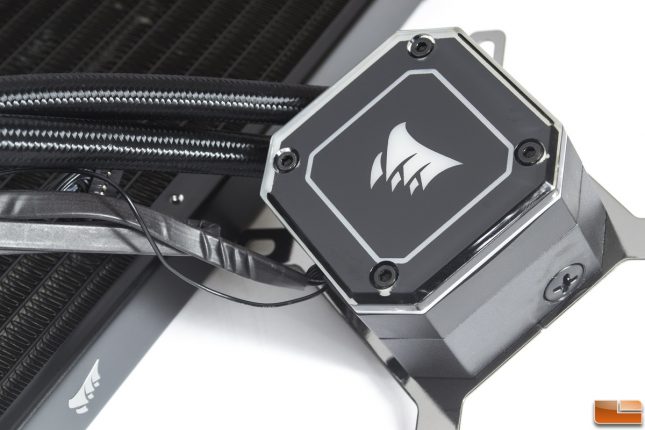 As for the power/communication cable, it comes out from the top side of the water block. The cable is not detachable, but this makes sense because the water pump requires this cable to function anyway. 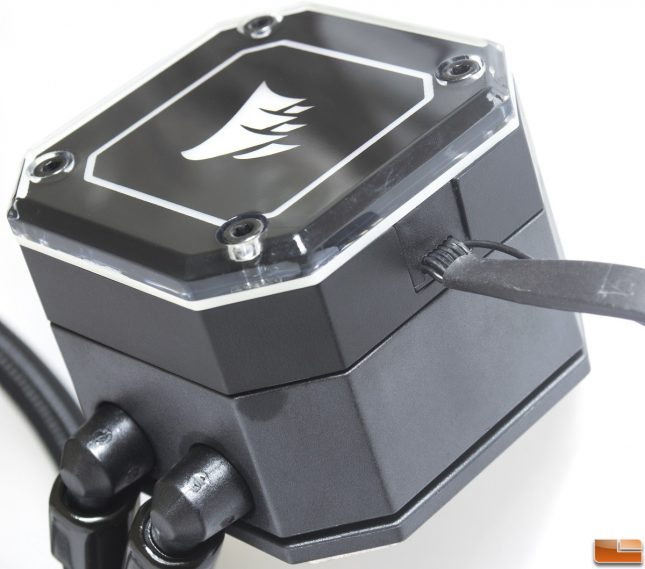 On the coldplate is a pre-applied layer of thermal compound over the copper base. This base design should allow more coverage for larger CPUs. On the side of the water block are some guide rails for installing the mounting hardware. 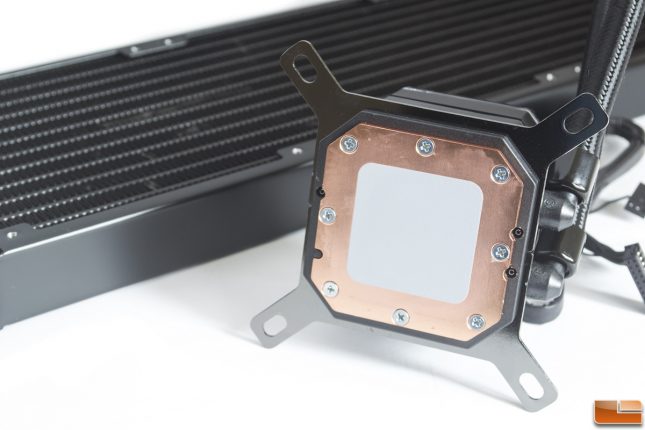 Removing the cap from the RGB module is very easy. There are four screws on each corner. Using the provided allen wrench, we were able to remove the cap and swap it around. The screws also hold the RGB pump head down to the bottom half of the unit. 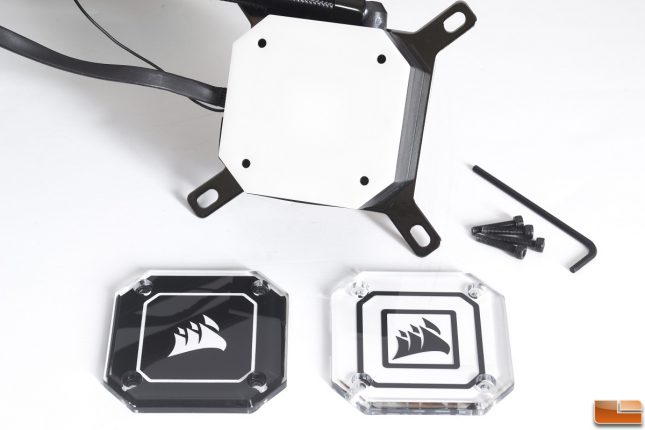 On the other side of the device is the RGB Hub for Corsair RGB devices.

Corsair iCUE can monitor the devices currently plugged into the RGB Hub. This will allow the user to tune fan and lighting settings.

On the adjacent sides of the device is a port for the water pump. This is a proprietary connector, so it is not possible to bypass the iCUE Commander CORE and have the water pump plugged into the motherboard. 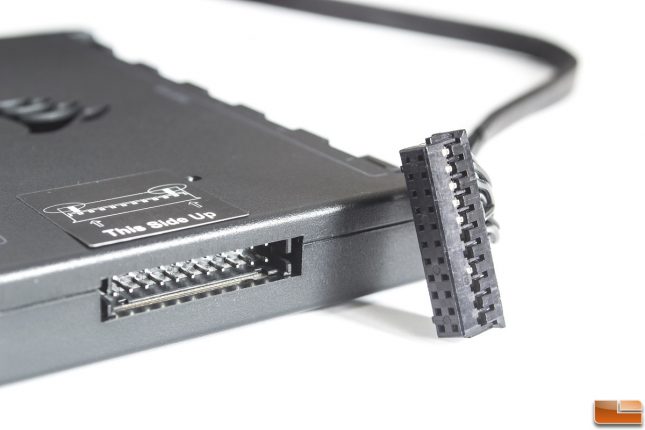 Let’s take a look at the Corsair iCUE software in the next section.