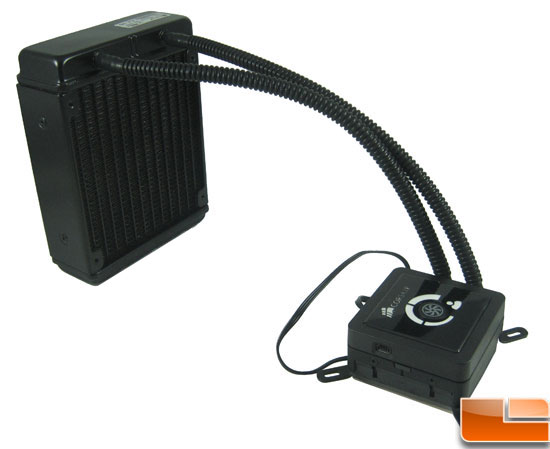 To be what seems like a mystical black art, water cooling gives most users chills to think of putting liquid in the PC as most are trained from small kids to keep liquid away. Those that have started to overcome the fear usually stop dead in their tracks when they watch the price tag climb for a custom water cooling loop. For the last few years companies have recognized the need for low cost, budget friendly kits. Corsair is one of those companies.

One could make the argument that the Corsair Hydro Series coolers have been at the top of many users’ short list of options for self-contained water cooling kits since the Hydro Series H50 was released back in 2009. The H50 had a thin 120mm radiator, single fan, and a CPU water block with an integrated pump and cold plate. The whole unit was sealed so no maintenance was needed on the user’s part. In 2010 the H50 got a big brother, the H70; it had a thicker 120mm radiator, new low profile pump/cold plate design, and came with dual 120mm fans. Then in April of this year Corsair released the H60. The H60 was an update to the H50. The H60 had the thin 120mm radiator, single 120mm fan, a new pump/cold plate design, and a new mounting system.

Now Corsair has released the update to the H70, the H80. The Hydro Series H80 has the 38mm thick 120mm aluminum radiator. The H80 also features a new pump housing with a speed selector switch for switching between Low Noise, Balanced, and Performance modes. It comes with two 120mm fans that are rated at 1300~2600 RPM @ 22~39 dBA. The H80 supports all current Intel LGA sockets, and even the upcoming LGA2011 socket. The H80 also supports AMD AM2 and AM3 sockets.

The H80 is also Corsair Link ready. Corsair Link is a modular hardware and software system that allows the end user to monitor and control fans and lighting.

Corsair has also increased the warranty period for the H80. The H80 now sports a 5 year warranty. The past Hydro Series coolers only had a 2 year warranty.