Today we are looking at a new PC gaming headset release from Corsair, the HS60 Haptic. Corsair began producing headsets over a decade ago, starting off with the HS1, a solid first entry from the company. Since then, Corsair has continually improved upon their headset designs and introduced new features. With so many solid gaming headsets on the market, it can be really hard to stand out. Does the new HS60 Haptic do enough to differentiate itself from the pack and warrant its $129 price tag at places like Amazon.com? 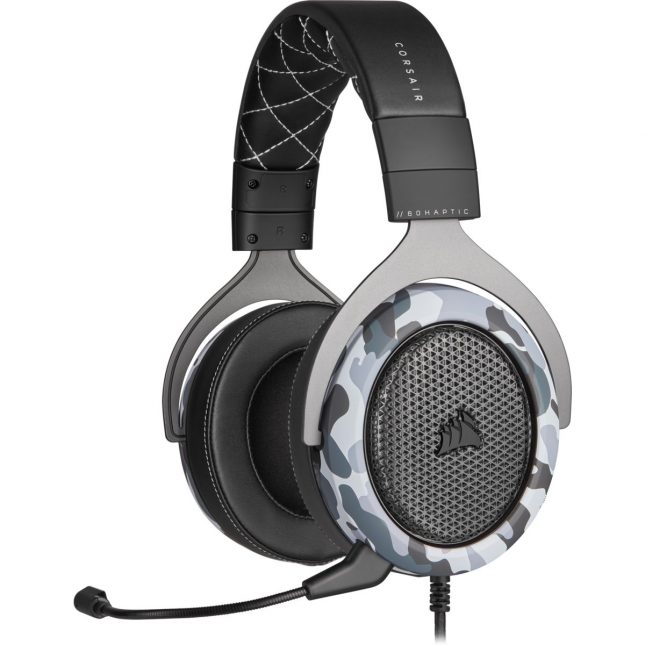 The Corsair HS60 Haptic takes the Corsair HS60 headset, which retails for $70 and adds haptic feedback along. The HS60 Haptic isn’t the first gaming headset to offer vibration, but Corsair is implementing it in a different way from competitors. Corsair has worked with Taction Technology to include Taction Transporters in the headset, making it the first gaming headset to use the technology. The Taction Transporters translate bass signals into vibrations and do so with great accuracy. Taction Technology has spent a great deal of time developing their tactile base transducer and they have a great deal of information explaining the technology on their website.

How does haptic feedback find its way to a gaming headset? When you think about it, the idea makes perfect sense. When you listen to music, bass tones are meant to be felt, but many speakers lack the ability to reproduce those low tones. Gaming headset rely on small 50mm drivers to produce sound and as good as the technology is on these drivers, their accuracy in the lows is never going to be a strong point.

All of the specifications on the HS60 Haptic are pretty standard fare. The frequency response is what we’re used to seeing from most gaming headsets. One thing is that there is no compatibility with anything other than PC. It would have been nice to see some type of console compatibility, but Corsair wasn’t able to implement it here. Corsair does back the headset with a two year warranty, which is nice to see. 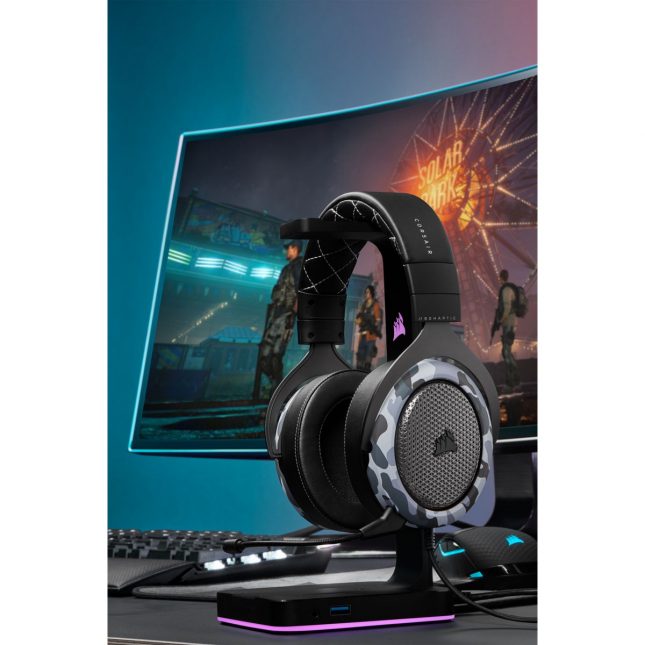 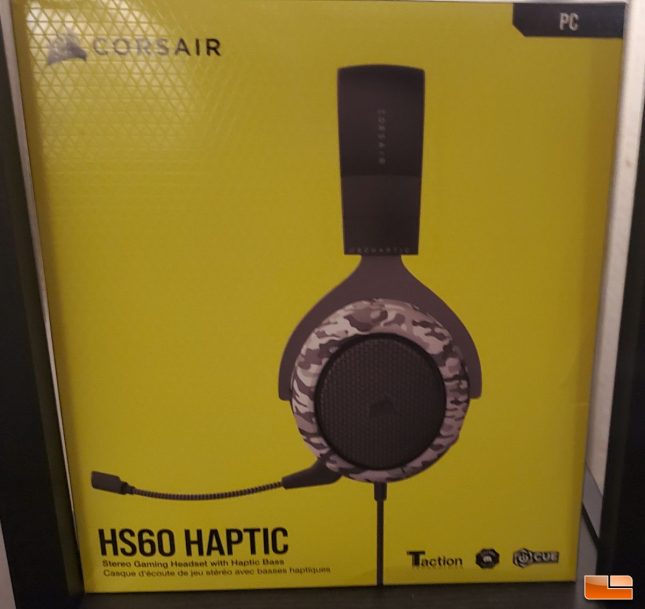 The HS60 Haptic comes in a box featuring Corsair’s trademark yellow and black design, with graphics and information featured throughout. Corsair made sure to include the Discord Certification logo (very important) on the front of the box. There is also a logo for Taction Technology, perhaps a condition of the partnership? One thing that stands out is that Corsair is being very subtle with the packaging of the HS60 Haptic and not pushing its vibration feature too much. I appreciate the subtlety and laid back marketing approach by Corsair, but it may cause people to overlook the headset when walking thru Best Buy. 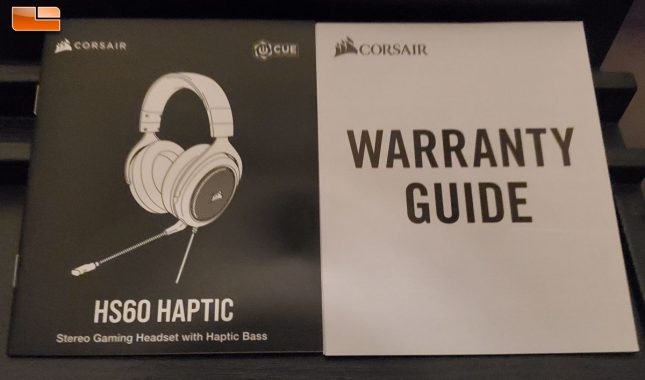 Corsair keeps the accessories to almost a bare minimum with the HS60 Haptic, though there is a pop filter included for the microphone. For a wired gaming headset ringing in at $120, it would be nice to see some extras like USB cable ties (who wants to wrap their cable around the headset when traveling), extra ear cups or even a Corsair sticker. Still, a pop filter is a cheap yet functional inclusion, so good on Corsair for that.

The Corsair HS60 Haptic follows similar build and design to the HS60, HS70 and other models in the lineup. The HS60 Haptic design team decided to outfit it with a Digital White Camo design that looks awful. With all of the other Corsair HS models having a subtle look, the HS60 Haptic sticks out like a sore thumb. If anybody happens to like this design, please let me know in the comments. 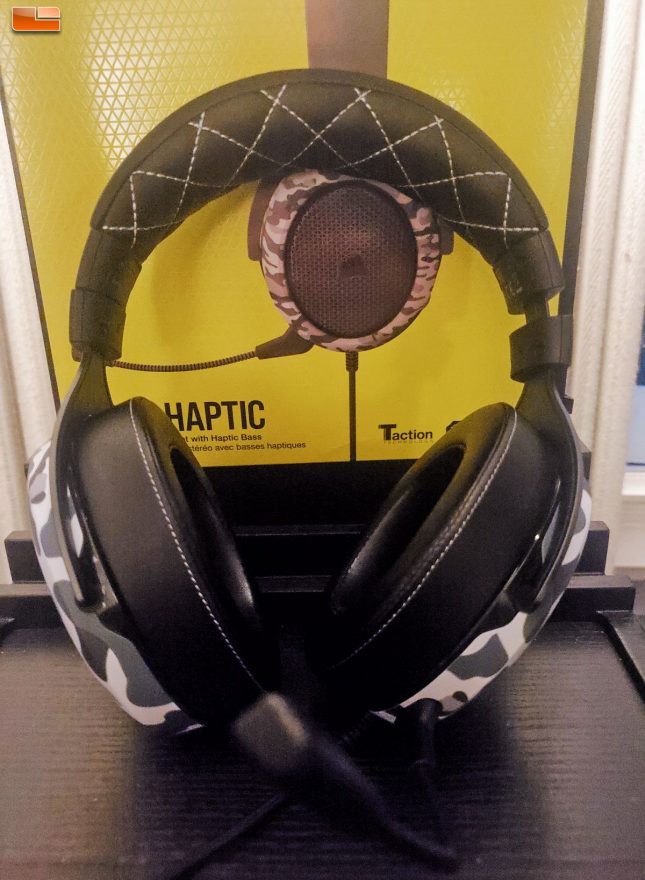 Aside from my gripe with the color of the ear cups, the rest of the Corsair HS60 Haptic looks great and evokes solid build quality. The stitched inner headband evokes quality. The blacked out Corsair logos on each ear cup are really clean and subtle. Corsair has placed logos on the headband with a very subtle font. The HS60 Haptic branding on the connecting points for each ear cup looks sharp.

The pleather ear cups of the HS60 are large, though they don’t seem to be padded as much as they can be. I noticed the ear pads compress just a bit before the padding gets dense. I have a fairly large head and normal sized ears and the HS60 felt very comfortable on my head, with just the right amount of clamping force and headband padding present. Each ear cup is able to swivel just a bit on the hanger, allowing for a more proper fit on my head. The stitching of the headband on the HS60 Haptic makes it a bit more stiff than I’d like, but it isn’t a deal breaker. The Corsair HS60 Haptic definitely fits into the comfortable category and with the couple small issues I noted being improved, could be even better. 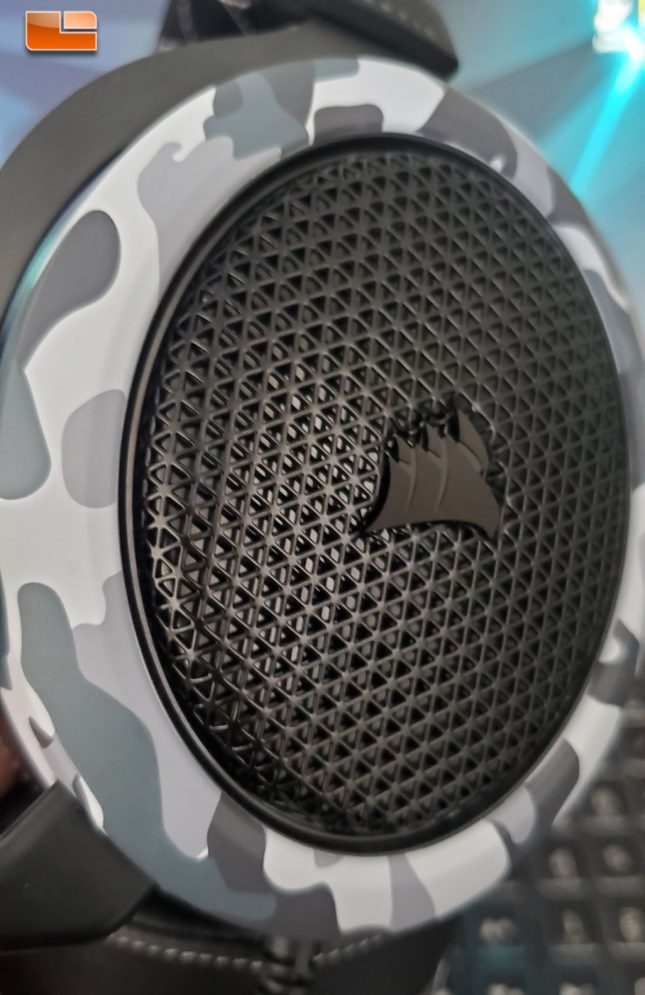 Corsair is using the same 50MM drivers on the HS60 Haptic as they do on their HS70 and HS60 models, so the sound signature is similar when it comes to the mids and highs. The introduction of the Taction Transporters makes bass reproduction an entirely new situation and the HS60 Haptic are going to be Corsair’s most capable headset in terms of accurate bass response. I’ll get more into my feelings on the haptic feedback in the results section of the review, though. 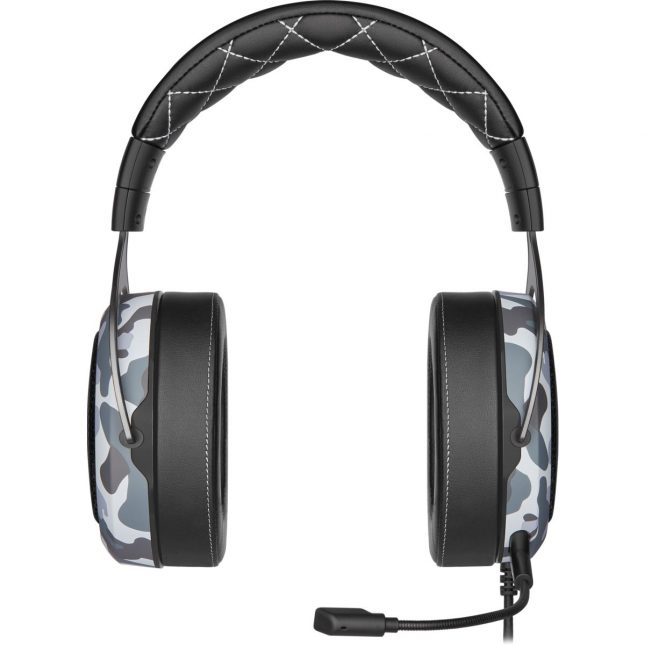 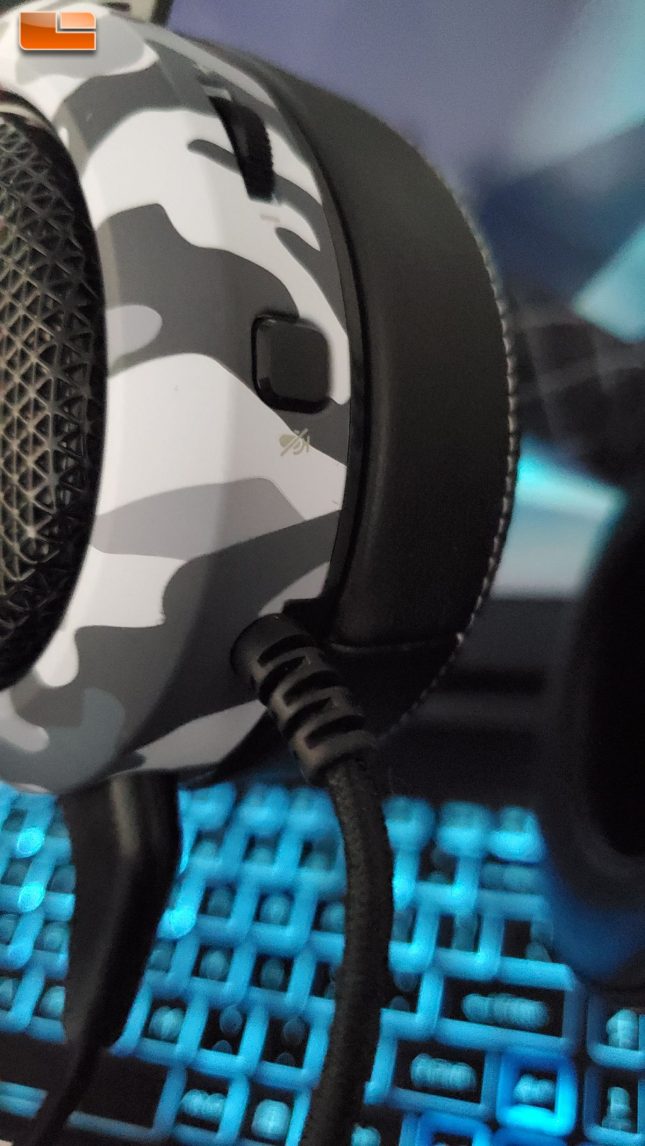 Volume control is available on a dial on the left ear cup of the HS60 Haptic. This dial offers tactile movement with satisfying lights clicks and was very precise when adjusting, with no jumps. You can also press the volume dial as a button to toggle through sound profiles. Right by the volume dial, there is a button that lets you toggle the mic on and off, with a vocal cue given when the button is pressed. The right side ear cup has a dial that controls the intensity of the haptic feedback. Unfortunately, unlike the volume knob, the haptic feedback doesn’t show a percentage when adjusting, so there isn’t really a precise adjustment. It’s not a big deal, but it would be nice if Corsair could implement an actual percentage control of the haptic feedback, or a way to show that is is disabled if so desired. 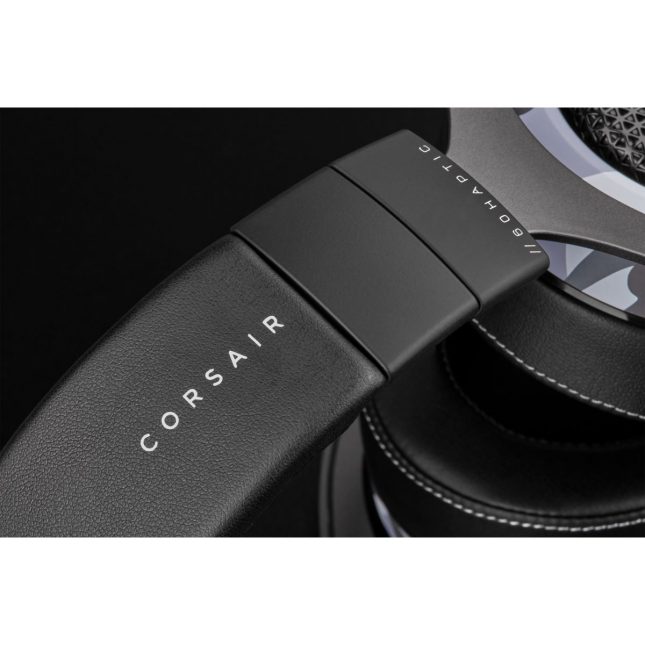 The HS60 Haptic have a clean design and excellent build quality that transfers from Corsair’s previous HS60 model. The controls of the HS60 Haptic have been done very well. I like having the volume control on my non-mouse hand side and the mic mute button is in a great location that is easy to find and press. The Digital White Camo color is my only major gripe with the design of the HS60 Haptic, as the build quality and other design elements of the HS60 Haptic are excellent. I just really have to question Corsair going with such a polarizing color design on a $129 wired headset that seems to be otherwise marketed towards the more mature or discerning gamer. With $129 getting you a solid wireless headset, Corsair really needed to do so much right to make the HS60 Haptic viable at $129 and while they nailed so many things, the Digital Camo design really holds it back in many ways. 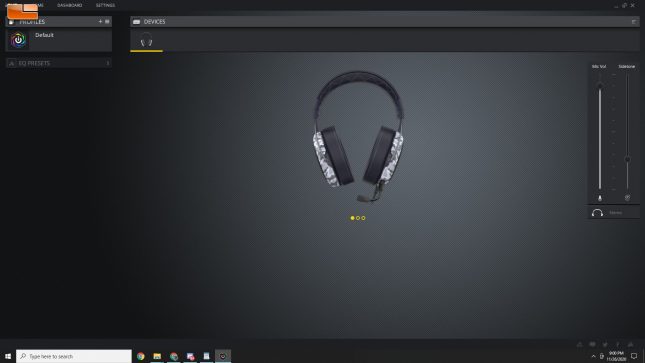 When iCUE first came out, we were there. iCUE is the unifying software for all Corsair peripherals and accessories. The H60S Haptic relies on iCUE for settings and iCUE needs to be installed for the headset to properly function. Once iCUE is installed, it will allow the user to toggle thru several equalizer presets, or manually adjust the equalizer. I found the “Clear Chat” preset sounded best, as it boosted the mids to a clear level while not being too overbearing. The end user can also adjust the microphone volume and set sidetone monitoring levels within iCUE.

Next I’ll share my thoughts on how the HS60 Haptic perform and how the Taction Technology actually translates in gaming.