In order to test our sample memory I thought it would be prudent to test it against something to give you an idea of what you would be getting for the price premium this kit demands.   I dug through my pile of extra gear to see what I could find that would make sense for this review and the following was the closest matches for this particular kit.

Currently I run a 16GB (4x4GB) Vengeance kit in my main rig so I grabbed two 4GB sticks and threw it into the pile for testing.  Not exactly apples to apples putting 8GB against 4GB but I thought it would show what you would get for a similar cost and double the capacity.  Also I needed to use two sticks since this is dual channel memory meaning the performance is maximized with two banks full.  Running only a single stick would have really limited the performance and bias the tests.
The second kit I found was one I have had for awhile and is actually no longer even sold since OCZ exited the PC Memory business back in Febuary.  This kit is an OCZ 4GB (2x2GB) PC3-12800 at 8-8-8-24 kit.  But since it is a CL8 kit vs the Dominator’s CL7 CAS it is still not totally apples to apples but close enough to give you a comparison. 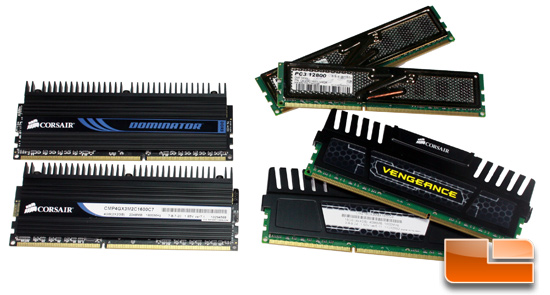 I ran each kit through the test with all the memory at a stock speed of 1333Mhz and the default timings to simulate what would happen if you threw it in to a motherboard that do not default to the XMP profile.  This would be a worst case scenario for someone that paid the extra cash for a Corsair Dominator kit and did nothing with it.
Second I ran all the kits at the rated speed of 1600Mhz and specified timings for all my tests.  This would be what would happen if you just slapped it in to a motherboard like mine that defaults to the XMP profile and did nothing else.
Finally I re-ran all the tests with the Dominator memory kit at its maximum over clock to see the improvements that could be realized if you spent the time doing what this memory was made for and maximize your over clock.
Games were tested real world with on-line play on the same servers and I attempted to play the same maps with each kit of memory to keep things as similar as possible.
SiSoft Sandra 2011:
I started off with Sandra 2011, the latest version, in order to get some basic statistics for all the kits. 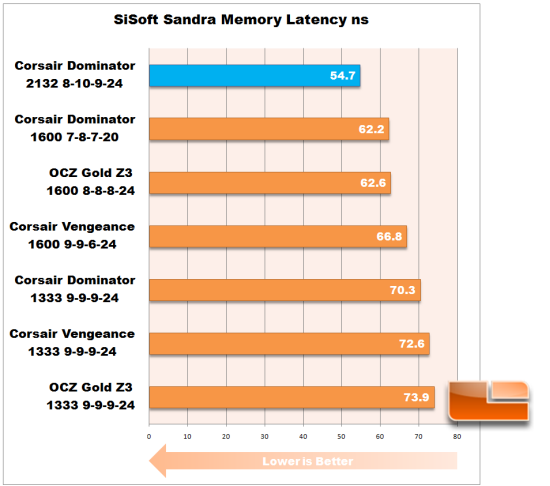 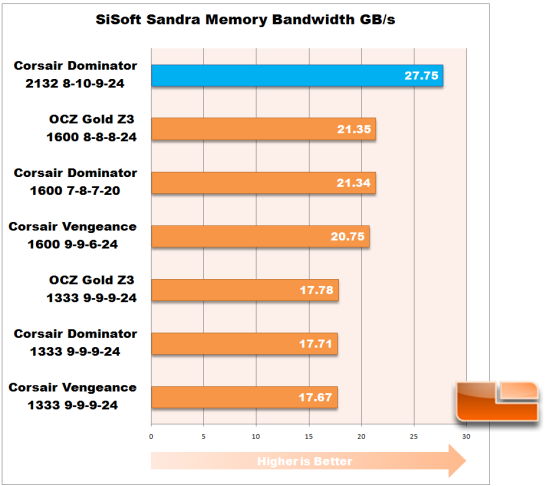 It is clear that the over clocking really allows the Dominator kit to shine. I was surprised at how much of a gain the extra cycles and timing tweeks made to the performance.  If you need proof that it is worth the time to overclock your memory this makes a pretty clear case.
AIDA64 Extreme Edition (formerly Everest)
This is another common synthetic test run on PC memory to show performance statistics. 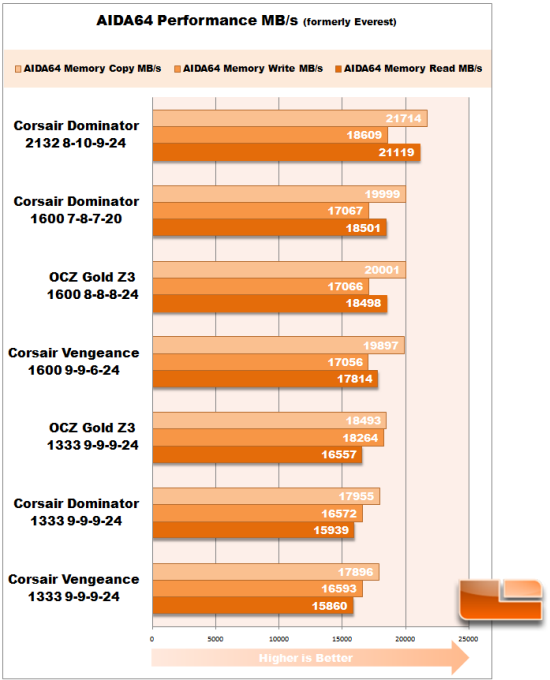 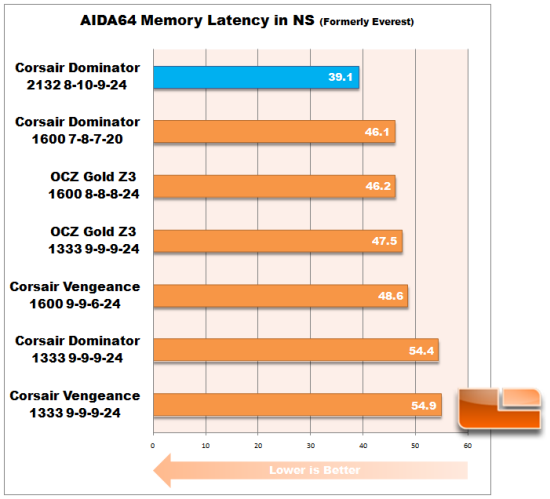 You can see that at 1600Mhz all this memory is fairly close in performance but when the Dominator ramps up it pulls away from the pack.  This is an 18% gain in latency and average 10% gain in reads, writes, and copy functions over the XMP profile.
Performance Test 7.0
Next I ran the memory section of the latest version of Performance Test 7.0 from PassMark Software.  This test gives you an aggregated score based on multiple memory benchmarks called the Memory Mark. 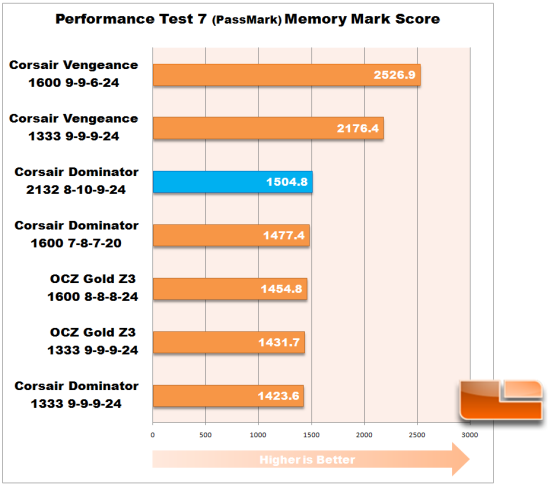 You can see the bias this test gives for the extra 4GB of memory in the Vengeance kit but you can still see the 27.4 point bump in the score from the stock to the overclock on the Dominator kit.
Hyper PI:
Then I did some bench marking with Hyper Pi v0.99b at both 1M and 8M settings.  If you are not familar with Hyper Pi it is the new front end of the old standard Super Pi, but improved with multi-threading support and an average time readout at the end of a cycle. Super PI is a computer program that calculates pi to a specified number of digits after the decimal point – up to a maximum of 32 million. It uses the Gauss–Legendre algorithm and is a Windows port of the program used by Yasumasa Kanada in 1995 to compute Pi to 232 digits. 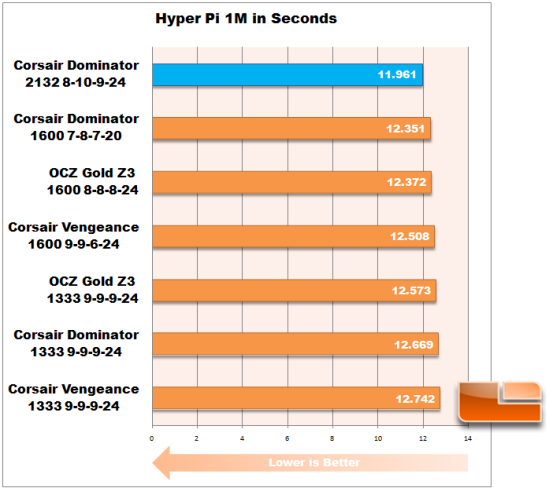 As you can see the OCZ kit and the Dominator kit run neck and neck but the over clock simply jumps ahead by almost half a second which is impressive in a test that only last a little over 12 seconds. 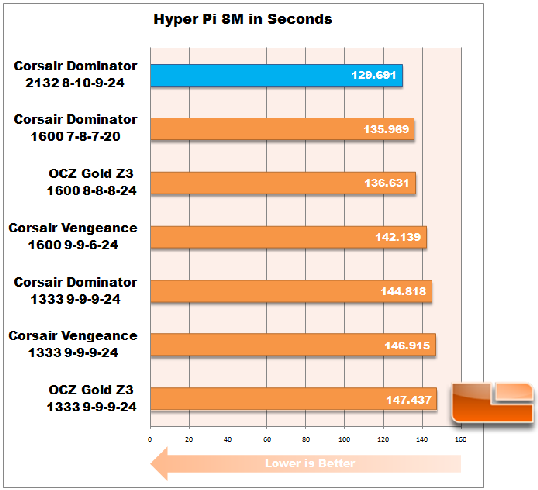 Hyper Pi at 8M had similar gains as the 1M test showing an improvement of over 6 seconds compared to stock speeds.
Questions or Comments? View this thread in our forums!
Jump To:
« Prev 1 2 3 4 5 6 7  Next »