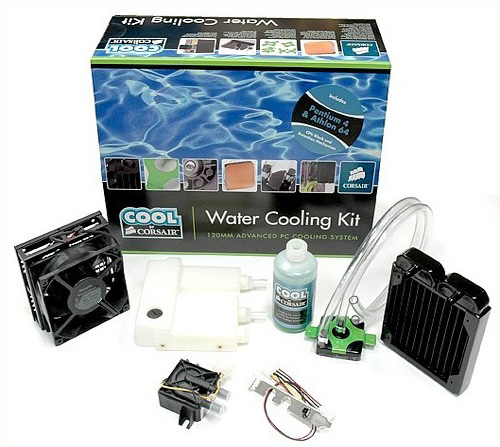 Back in early January, while at CES, I brought you a short bit on Corsair’s newest water cooling solution, the Corsair “Cool”. At that time I didn’t give it much mention as I wanted to get my hands on a kit and abuse it…of course for your benefit. After spending a week doing just that, I’m here to share the results with you.

Three years ago, water cooling was limited to the brave few who were able to fabricate their own coolers or those who chose to invest in very basic setups. Over the next year, with hotter processors and more ingenious enthusiasts, cooling became more important, and exotic cooling became more main stream. Companies like Danger Den, Swiftech, Koolance, and Asetek, among others began fabricating quality water cooling kits. A couple of issues have really kept water cooling from becoming as common as it should be. First, kits can be hard to set up, and sometimes messy, and in the hands of an inexperienced modder…dangerous. Most people are leery of mixing water with their computer parts, for obvious reasons. Another issue is room, most people like mid-tower cases, which are not conducive to water cooled systems. When you take into account the size of a radiator, fans, reservoir, and tubing, a small case really doesn’t benefit from water cooling. That brings us to external kits. External kits bring into consideration a whole other set of issues. While moving everything but the tubing and blocks outside of your case, external kits are cumbersome (you basically have another small case to consider), most of the time, these external kits were beset by inferior parts…bad pumps and poor heat dissipation among other issues.

Can Corsair’s “Cool” address all of these issues and bring water cooling to the masses? Who will benefit the most from this system?

Before we get too far, let’s check out some of the Specs of Corsair’s “Cool”…