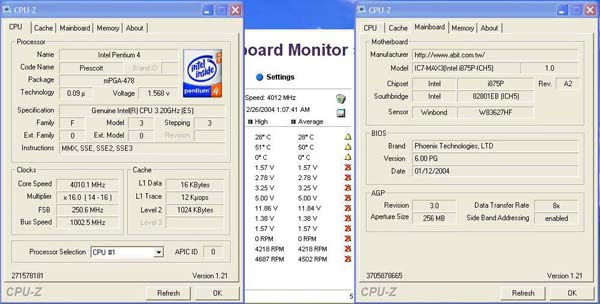 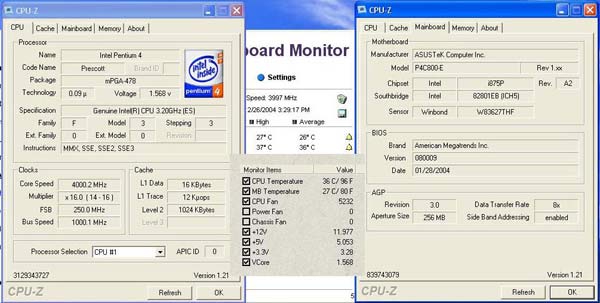 Results: If you took a close look at the images you will notice that the ABIT board recorded idle temps at 50C while the ASUS board was showing 36C on both MBM5 and ASUS Probe. This is a 14C (25F) difference between the boards. Both boards have the Vcore set to 1.5875V in the BIOS, but are running the same actual voltage of 1.568V. Both the ASUS and ABIT boards record the motherboard temperatures around 26-28C. Using the same monitoring program, processor (Important due to the fact that each CPU has different amounts of leakages), voltage settings, and testing conditions we found a temperature difference to great to ignore or call “random error”.

Since the Prescott is a new processor based on a new core the next logical step is to look at a known processor. For this test we ran our 3.2GHz Pentium 4 Northwood processor at defualt settings.

Results: Again we see vast temperature differences between the CPU temperatures and this time the Motherboard temperatures are identical. The ABIT board came in at 36C while the ASUS showed 23C. The CPU temperature on the ASUS board is actually 3C lower than the board temps! The 13C difference here goes along with the 14C gap we noted using the Prescott. It should be noted that on this test we could not get the VCore to be identical, but even with the ASUS board having almost .1V more the temps were much lower than the ABIT’s reading. MBM5 confirmed these results, but we put in the above pictures so we don’t put you to sleep. We also used Intel’s Canterwood “Bonanza” motherboard and found CPU temps to be around 27C. We found that these are three motherboards with three very different temperature readings.

This test eliminated the Prescott as causing inaccurate readings.

It turns out that the CPU or “Core” temperatures are not a measure of actual temperatures. The temperature is actually ?calculated? by the chip that is associated with the thermal diode. There is a parameter for calculation that is provided by the I/O chip vender, which is supposed to be standard, but that doesn’t seem to be the case. It has also been determined and confirmed by Intel that the temperatures observed here have too much variation to have been calculated using the same parameter. This means that the issue lies in the inconsistency of the parameters written by different companies.

The only way to make sure that board temperatures are correct (at least close) and consistent is for Intel to better regulate a standard parameter that motherboard manufacturers and I/O venders must follow. Otherwise we will continue to see large temperature differences between brand lines. At the same time I also feel that it’s not Intel’s job to police how the venders implement their monitoring technology. This isn’t a perfect world and perfection takes time and time is money, so the end user should get used to seeing core temperatures that are more than likely far from accurate.

So the next time your buddy is bragging that his cooling solution on an ASUS board is better than the one on your ABIT board just laugh and say whatever! If he doesn’t believe you show him this article and put him in his place! At the current time it is not possible to consider comparing temperatures between two different brand lines.

Legit Bottom Line: The core temperatures that we “monitor” are inaccurate and are nothing more than a mathematical equation that varies due to the fact that board & I/O chip venders don’t use the same equation!

A Big Thanks To The Following People/Companies For Letting Me Bug Them During My Research: