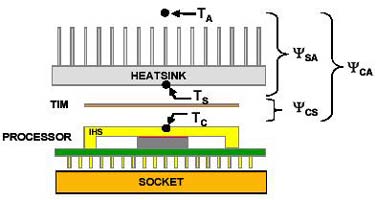 After posting our recent Prescott Overclocking article the sharp eyes of many review sites, online retailers, and enthusiasts noted some large temperature differences between our articles. If you have not been following our Prescott coverage let me give you a quick run down. The initial Prescott review was written by me (Nathan Kirsch) using the ABIT IC7-MAX 3 and the overclocking article was written by Jason Petermann on his ASUS P4C800-E Deluxe board. There was a large difference in temperatures noted between the two boards and due to the feedback from this I’ve spent the past couple weeks running our 3.2E Prescott on both boards. After using identical settings for testing we found that the results are not only surprising, but they also point out an issue that needs to be better understood by enthusiasts!

How “Core” temps are found:

Since this whole situation started with our Prescott the it will be the processor used for this example. Many people think that core temperatures found using Mother Board Monitor or other utilities is done by a thermal probe on the motherboard. This is possible, but with the boards in question today that is not the case. There is no temperature sensor found on the board in the socket area of the ABIT IC7-MAX3 and the ASUS P4C800-E Deluxe! The reading actually comes from a thermal diode found in the Prescott die.

We found that the Intel has incorporated two methods of monitoring die temperature in the Prescott; the Thermal Monitor (also known as: “Prochot/Thermtrip sensor”) and the thermal diode. To better explain what these do it’s best to quote directly from Intel:

What measures the temperatures:

How the temperature is figured: 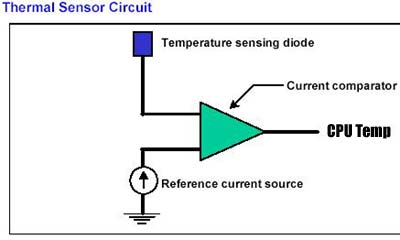 What influences the reading:

Every processor has different amounts of leakages and is therefore unique. Since each processor is unique the readings between two processors should never be the same. One of the parameters used in the equation to determine the CPU temperature is the Diode Ideality Factor (A.K.A. the Non-Ideality Factor) which describes the behavior of the diode relative to a theoretically perfect diode. The ideality factor depends on the characteristics of each individual processor and will vary slightly from one chip to the next. According to the data sheet the range of ideality for the Prescott ranges from 1.008 to 1.0137. The temperature calculation should take this range in to account in order to improve the accuracy of the reading.

One other variable that influences the temperature accuracy is the “‘Series Resistance”, which is a measure of the resistance in the traces leading up to and away from the thermal diode. The Prescott data sheet shows that this ranges between 3.242 and 3.594 ohms. Some diode sensors have the ability to adjust for the temperature error caused by the resistance, some do not. Lastly, cross-talk from high speed signals to the thermal diode traces might also introduce an error.

Now that you have the basic understanding where the “core” temperatures are coming from lets get testing!