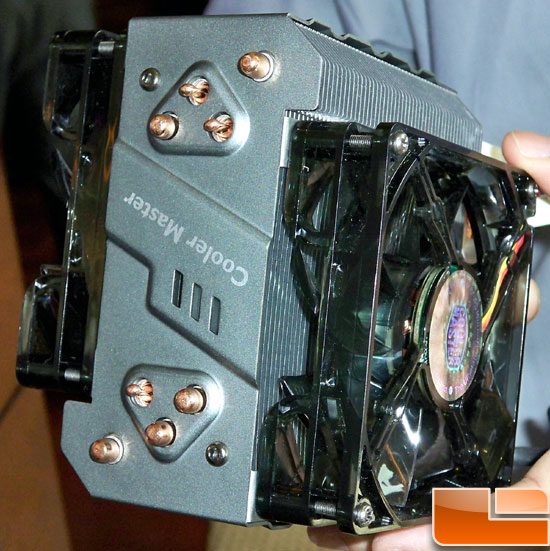 What you see above is what Cooler Master believes is the next wave of affordable cooling. No the picture isn’t deceiving, there are two 92mm fans attached to this heat sink, and are at offset angles. Cooler Master has tested this design and state that offsetting them like this reduces the dead zone, and actually increases flow pressure for both fans, as well as increases surface area of flowing air. We are excited to put the N520 and its bigger brother N620 (120mm fans) to the test. 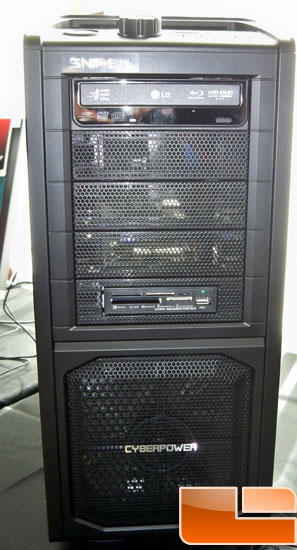 Did we mention that Cooler Master does great enthusiast cases? In the photo above you can see the upcoming Storm Sniper gaming chassis. This Mid-Tower beauty promises to be one of the very best cooling cases ever. It features a 200mm fan on the top, on the side, and in front.

The fan speeds can be controlled by rotating a large knob on top of the case. In the middle of the knob is a button that will allow you to toggle the blue LED’s at each fan off and on. This is a feature that I have personally been wanting for a long time as lights can be extremely annoying at times. 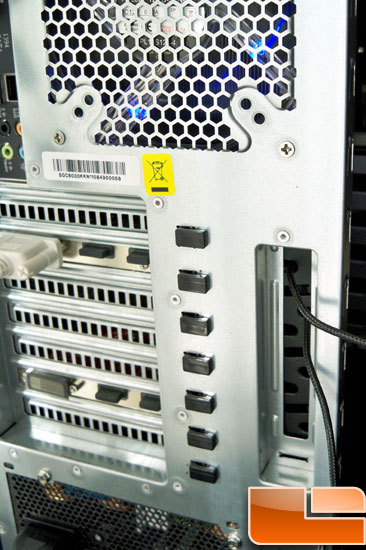 It also features a security system dubbed the “Storm Guard.” This feature allows you to run the cables for your mouse/keyboard/headphones/etc. through the locking case so that they can’t be walked off with quite so easily. Priced at $179 I can’t help but feel they’ve got a winner here, this is one of the best cases I’ve seen for an enthusiast. It’s built for gamers who take their PC hobby seriously and has an incredible amount of thought behind the design. With a collaboration of Cooler Master, Kode5, Fnatic, SK Gaming, and Mouse Sports it’s easy to see that people who really care about performance helped design this case.

This is the Storm Scout, a similar design to the Sniper but in a slightly smaller package. It doesn’t have adjustable fans or an LED light toggle but features a 140mm fan at the front and top, while a 120mm fan pulls heat out of the back, each of which are blue LED. 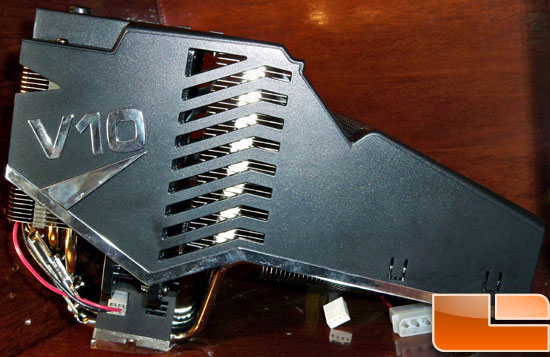 It’s big, it’s bad, it’s the Cooler Master V10 CPU cooler. Did I mention it’s big? This beauty was shown off last year at CES 2008 but hasn’t quite made it to market just yet. While it is big and clunky looking, it’s actually very light weight thanks to the use of aluminum. You can also see the additional wires hanging off near the heat pipes. That’s for the TEC that is actually wedged between the 6 heat pipes. What makes the V10 so large is the number of fins. They are grouped into three clusters to help move all of the heat off of the heat pipes. 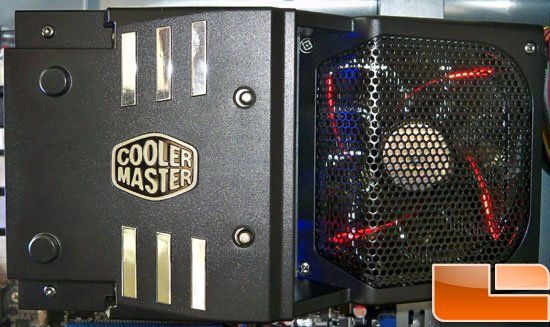 There are two 120mm fans cooling the three clusters, the horizontal fan on the side actually blows down to help cool the motherboard and other components. Cooler Master claims that this is the best air cooling heat sink to date as it is not only able to dissipate 200+w of CPU heat, but also cools off surrounding VRM’s and Memory. I was assured that the TEC has been tested thoroughly so that it will not reach a point where it condensates, and has the ability to throttle itself as cooling is needed (hence the reason it’s over 1 year time to market).We’ll be getting one of these in the mail in the next few weeks so look for a full write up on this bad boy very soon!