For those who need 2GB of GPU Memory

If you have deep pockets then you might want to consider the Dell XPS 600 Renegade for your next gaming system.  Not only is it the first Quad-SLI computer on the market it is also personally signed by Mike Lavellee (Killer Paint) and Michael Dell (The founder of Dell)! The system features the brand new Intel Pentium 955 Extreme Edition processor that has been overclocked from 3.46GHz to 4.26GHz, 2GB DDR2 memory at 667MHz, and of course two dual 1GB GeForce 7800 video cards. 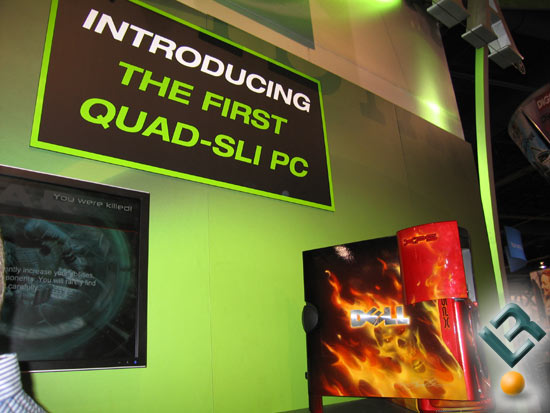 IF you look really closely in the above picture you can see the signiture we talked about on the lower right hand side of the case door.  When LR first saw the Dell XPS 600 Renegade at the Intel booth they mentioned for us to feel the level of heat coming from the system at idle, which we did and it was a bit warm.  When we got over to the nVidia booth where the picture above was taken it was being used to game on and the case door was open.  While we didn’t put two and two together it would be interesting to see how hot this system gets with the case door on and Quake 4 played for hours on end! 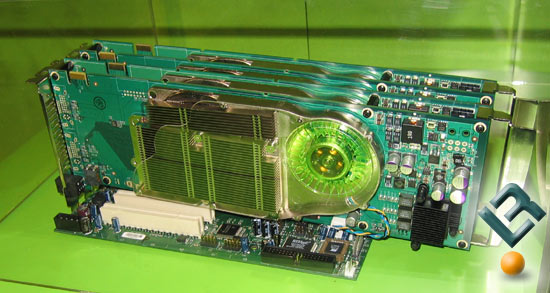 After playing some Quake 4, we got a chance to see what the cards look like up close.  In the above image you can see that this system uses four individual PCB’s that each have 512MB of GDDR3 memory on board.  Each card has a single slot heat sink and fan that directs the hot air from the card out of the system. 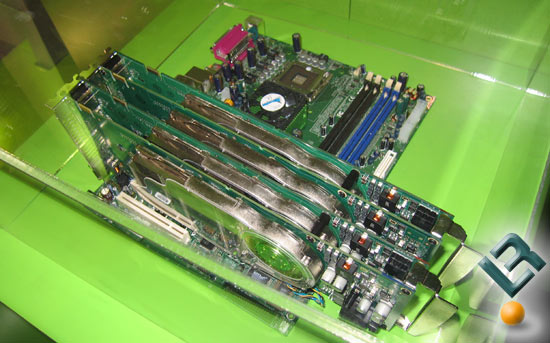 Looking down on the cards you can really get a feel for their length and the tight spacing between each PCB.  See those two PCIe power connectors on the right side of each 1GB SLI card?  Let’s take a closer look at the power delivery and consumption of these babies.