Never before have we tested so many game titles and ended up with this much data for one article. Testing was tedious, but once we wrapped it up it was a little humbling. This might have been one of the most unique things that we have done since the site was first started back in 2002. Thanks to the Intel sponsorship, we were able to take the time to buy, play and benchmark the top 50 steam games on two amazing platforms. This is something that took hundreds of hours to do, but was a great learning experience and gave us a look at performance on games that are very seldom if ever tested.

Over 5 million people were playing the Top 50 games on Steam when we took our snapshot. That is a huge player base and many of these titles have never seen the light of day in CPU performance reviews.  It also feels like the results are more valuable since these are the games that people are actually playing. A number of CPU reviewers use built-in benchmarks found in titles like Ashes of the Singularity: Escalation and there are under 200 people a day playing that title. So, just something to keep in mind when you are reading performance reviews on gaming hardware in the future.

The results can be a little overwhelming when all placed in one chart based on the average FPS of the benchmarks run. If we chart the results in order by percentage win for the Intel Core i9-9900K you come up with a more visually appealing S-curve chart of the two platforms. 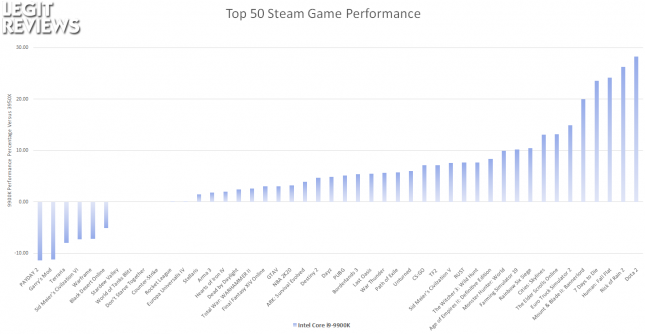