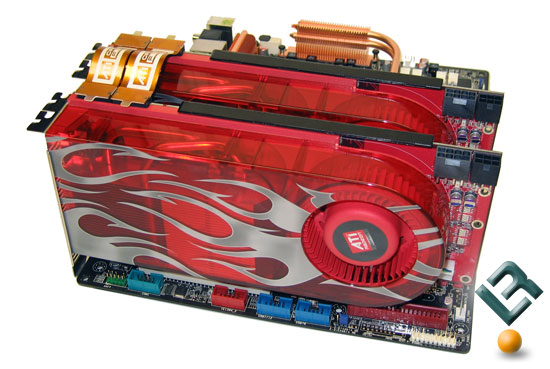 As was stated in the introduction of the article we caught a glimpse of the great potential the R600 architecture has. Of course we have come to expect that each time a new video card is released that performance increases over that of the previous king of the hill. While AMD has a much faster card than the ATI Radeon X1950XTX it can’t claim the title of fastest video card and most of the populace will declare that AMD has failed. But what they have succeeded in is lowering the price of entry to the next level of performance. Since the GeForce 8800 GTS and Radeon HD 2900XT perform so close to one another it will no doubt cause prices to drop which means that you, the person shelling out your hard earned money, are the winner.

The problem with the 2900XT however begins and ends with power consumption and heat. Our test system consumed 326 watts under a normal gaming load and 184 watts at idle, that’s a lot of power for one video card folks. When you are consuming power, it is converted into heat so a great cooling solution is required to get rid of it, but it is then put into either your case or the room you are in. Gaming for long periods of time in a small room can get quite uncomfortable with all the power being used so it can be a concern.

AMD has done a good job with the stock cooling unit on the Radeon HD 2900XT, it is louder than the GeForce 8800 GTS/GTX cards but is not nearly as loud as the ATI Radeon X850XT PE, X1800XT, or X1900 series cards. It keeps the GPU core cooled to 50c while idle and handles all the wattage under load to keep the GPU at 85c.

We are being promised superior DirectX 10 gaming performance by AMD however the problem is still the lack of DirectX 10 content. Without any DX10 content it is impossible to give any kind of buying recommendation other than how the video cards stack up in games that you are playing right now. This morning Nathan Kirsch wrote up a piece with the Radeon HD 2900 XT and compared it to the GeForce 8800 GTX on the DX10 benchmark Call of Juarez, so be sure to check that out, but remember his testing wasn’t done on final code.  With no one able to give a definite date of “gold/shipping” DirectX 10 code it’s a very messy situation with both NVIDIA and AMD claiming that their implementation lends itself better to the next level of gaming nirvana.

Taking the above into account, the ATI Radeon HD 2900XT provides the best performance in 2 of the 3 most intense shader and lighting heavy games that are on the market, surpassing even an overclocked GeForce 8800 GTX. If you are looking at the high end, the GeForce 8800 GTX/Ultra is still king and the GeForce 8800 GTS is my recommendation over the Radeon HD 2900XT, with the few caveats mentioned above (power and heat.) If you don’t mind or don’t care about such things, the AMD card provided performance that was on par to the GTS and as mentioned, out gunned the current king of the hill video card which shows that it has great potential to perform well when the next generation of games finally arrive.

At $399 AMD has a good performer on their hands with an incredible feature set. The features literally just keep coming, and we will have more articles about those features, including CrossFire testing, for you soon for those looking for more information.

Legit Bottom Line: AMD has finally launched the long awaited ATI Radeon HD 2900 XT  DirectX 10 video card. Its performance leaves it short of being named the king of the hill, but if you are willing to put up with extra heat and power consumption, it brings a long list of features and performs on the same level as the NVIDIA GeForce 8800 GTS.