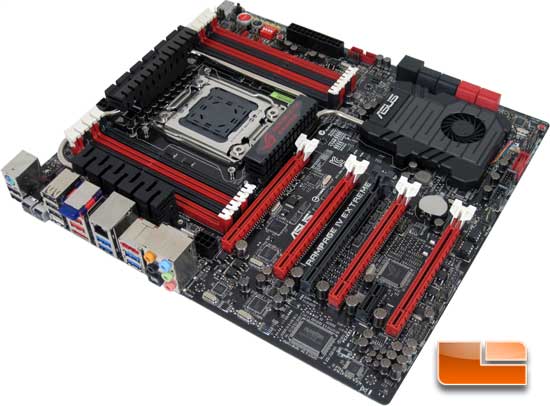 The ASUS Rampage IV Extreme is definitely geared for the extreme overclocker. With features like subzero sense, a Liquid Nitrogen mode, and a Slow mode you can tell ASUS was aiming for an extreme board. Before we get to far past the ‘extreme’ features I just mentioned, figure we should take a look at them. The first one mentioned, subzero sense, is a direct line to temperature sensors on the motherboard. Though we don’t need to use any software to check the temperatures, all we need is a K-Type thermocouple wire to access the sensors with your thermometer. The LN2 mode aids in eliminating the cold bug issues found in some processors during extreme overclocking with Liquid Nitrogen. The Slow mode immediately drops the processor frequency down while you increase or decrease the temperature of the system, once again to help with system stability. Another feature that is typically for the ‘extreme’ user is the VGA Hotwire. If you have a habit of overvolting your graphics card with variable resistors of a variety of other ways, ASUS has set it up so you can do it through the ASUS Rampage IV Extreme! Just solder the two wire cable to the graphics card voltage regulator and you will be able to adjust the voltage accurately with the ASUS Rampage IV Extreme.

The ASUS Rampage IV Extreme Intel X79 motherboard has many of the features that we have seen on our previous run ins with the Republic of Gamers motherboards. Some of the features like Extreme Engine Digi+ II, ROG Connect, GPU.DIMM Post, and ROG iDirect are exclusive to the ASUS ROG series of motherboards. The ASUS Rampage IV Extreme also bring along with it a couple of new features. Among these is the X-Socket, the X-Socket allows you to switch out the back plate of the Intel LGA2011 socket. This allows you to reuse your Intel LGA1366 CPU cooler. Another of the new features available with the ASUS Rampage IV Extreme is the OC Key. The OC Key plugs in to your graphics card DVI port between the card and cable. With an second cable running directly to a header on the motherboard you can directly control your processor frequency and monitor the system temperatures and voltages with an onscreen display. The best part is, it is completely independent of the operating system. This means we can tweak the processor clock of our Intel Core i7 3960X in the midst of running a benchmark without interrupting it!