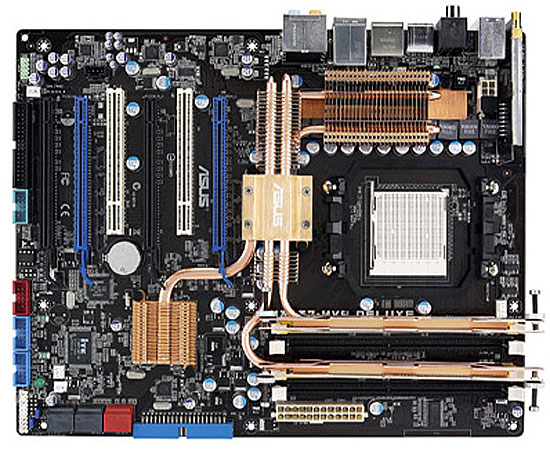 As you look at the Asus M3A32-MVP Deluxe the first thing you focus on is the heat pipe system  that they use for cooling. We are used to seeing this type of cooling on nearly every enthusiast board these days, but Asus has taken the heat pipe concept to the next level to include your ram modules.  We will take a closer look at that in a moment, but it is hard to look at the picture of the full board and not wonder what is going on with that.

This board is a full sized ATX board that is built on a black colored PCB (a personal favorite of mine) and includes high-quality conductive polymer capacitors.  Let’s get a closer look at the board. 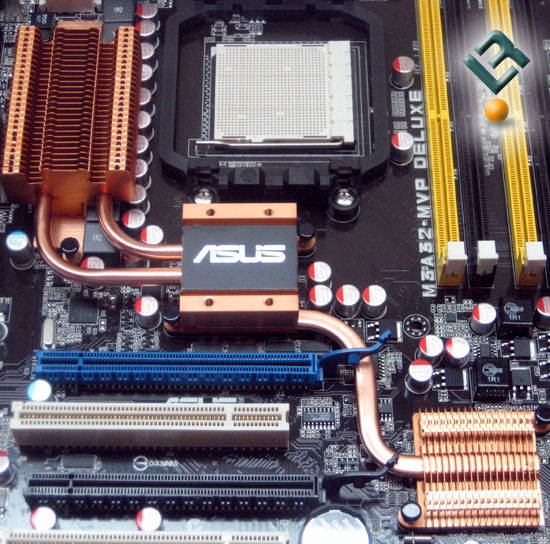 A quick look at the heat pipe as it comes out of the box.  The pipe and heat sinks cover the north and south bridges, as well as the power area of the board.  We will look at the Asus Cool Mempipe that adds the memory into the cooling equation here in a moment. 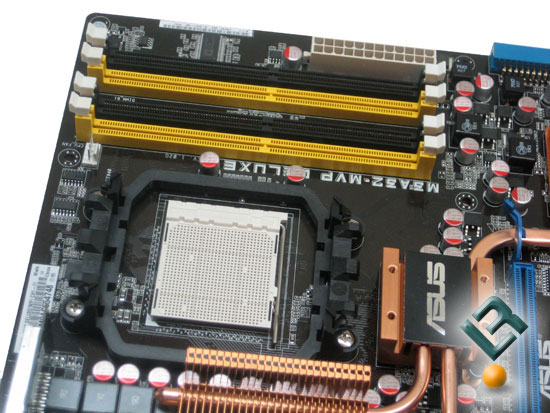 This is also where we find our 24-pin power connector, which is wisely located near the edge of the board.  This area of the board is really clean when compared to many other boards, there is just not much that was placed here. 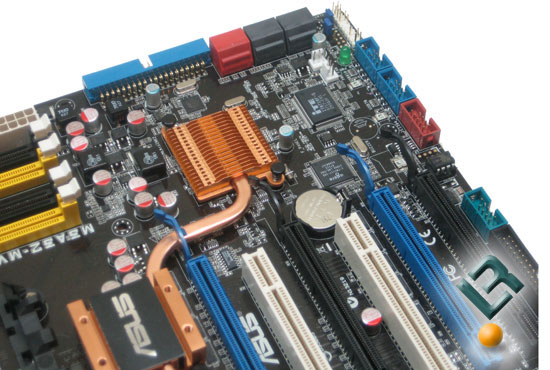 As much as the top right of the board was clean and wide open, the bottom right of the board seems to have been overloaded.  On this part of the board, we have our one IDE connector as well as our SATA connectors.  The southbridge controls the IDE and the four black SATA controllers and supports SATAII and RAID in 0,1 and 0+1 configurations.  The two red connectors and eSATA port are controlled by the Marvell 6121 and 6111 controller, which also supports RAID 0 and 1.

Just to the left of the IDE connector we find our Southbridge, which is the familiar. SB600 chip.  The southbridge is cooled by a passive copper heat sink which is a part of the heat pipe  system on the board.

Underneath the SATA ports is where we find out front panel connector pins.  We also have a variety of USB and firewire headers here at the bottom edge of the board.  All in all, as much as is included in this part of the board it is actually not too cramped at all. 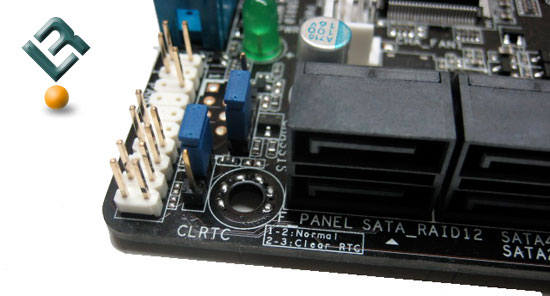 Just a close up of the front panel connector pins.  You can also see the CLR CMOS pins are located here. 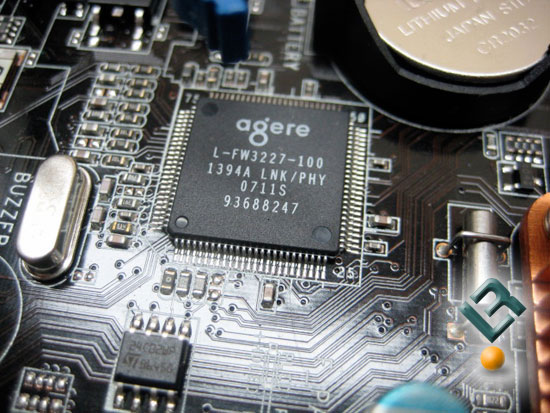 Firewire on the board is powered by the Agere FW322 which supports two firewire 400 ports.  It would be nice to see some of these high end enthusiast board include firewire 800 as well.

Just a closer look at the SATA and IDE connectors. 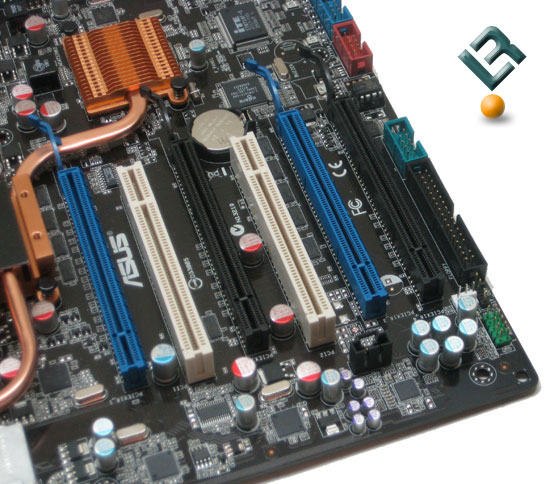 At the bottom left of the board we see that Asus has included four PCIe slots that support ATI CrossfireX at dual x16; triple x16/x8/x8 or quad x8 modes.  These PCIe slots are also PCIe 2.0 compliant.

Asus also included two legacy PCI slots on the board. 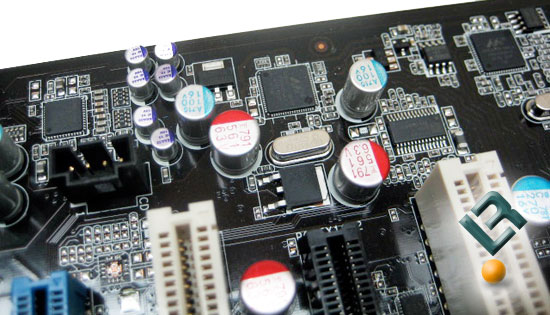 This is also the area of the board that we find many of the chips that control audio, lan and the such.   The Asus M3A32-MVP Deluxe includes the Marvel PCIe Gigabit Lan controller which features AI Net2. 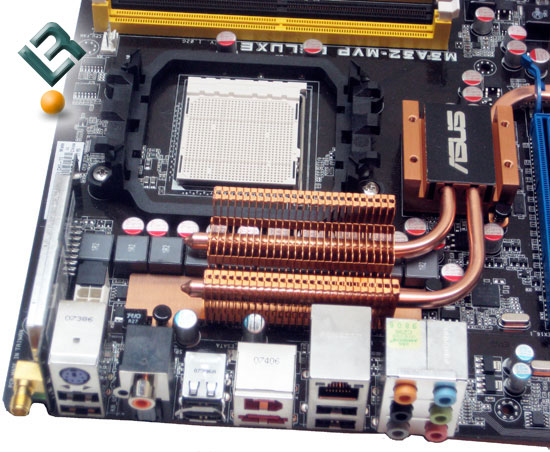 The top right of the board houses our processor.  This board supports all existing AM2 processors, as well as the newly released AM2+ Phenom in all of its flavors.

The eight pin 12v connector is located just behind the ps/2 port and right under the wireless lan card that is on the board.  I would have preferred to see the connector at the top edge of the board, but this is not too terribly bad of a placement. 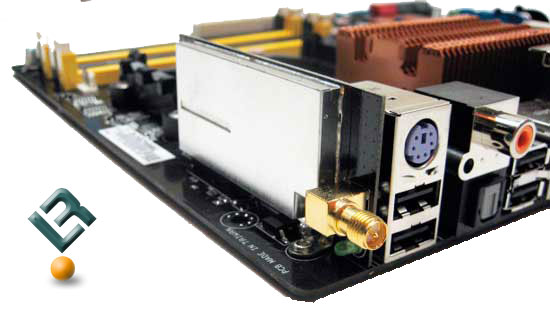 This board is the WiFi edition, so it appropriately comes equipped with a built in wireless card that is 54Mbps IEEE 802.11g compatible. Here you can see where the antennae connects to the board. 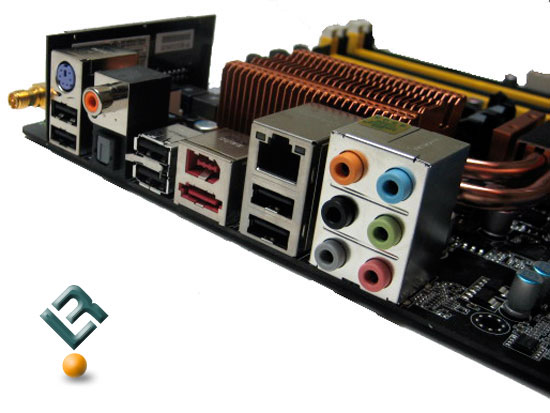 The back I/O ports include one ps/2 port for keyboard, one S/PDIF Out for Coax or Optical, one eSATA port, one firewire 400 port, a lan port, six USB connectors, your WiFi antennae jack and your audio jacks.

Let’s look at the bundle and the BIOS.