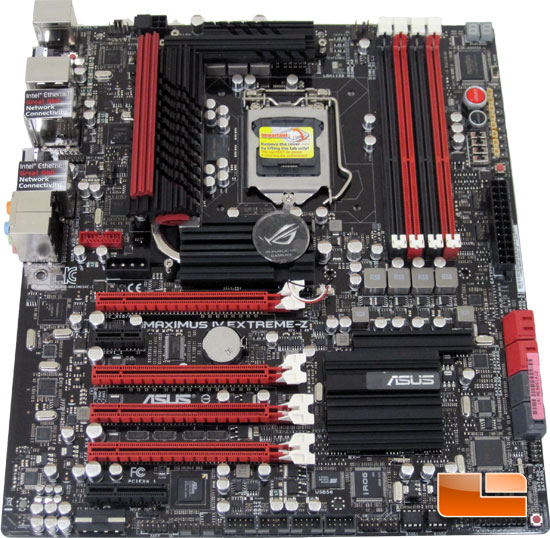 The ASUS Maximus IV Extreme-Z is tricked out in a red and black theme. It will look great in most of the windowed cases out there today. For me looks always take a back seat to performance, being a Republic of Gamers board from ASUS, you know it will have plenty of performance! 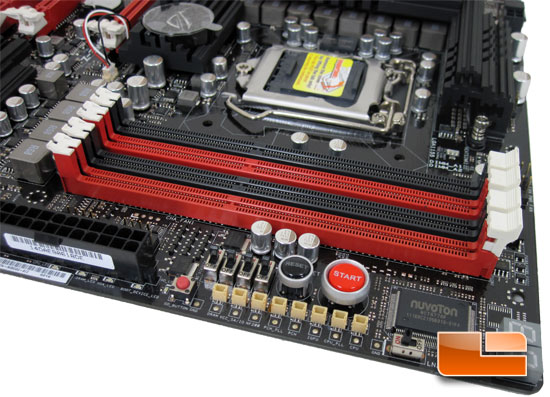 Taking a look at the corner of the ASUS Maximus IV Extreme-Z there is no shortage of features here! The DIMM slots will support up to 32GB of DDR3 memory at 2200MHz (O.C.) in a dual channel architecture. Since the Maximus IV Extreme-Z is an Intel Z68 chipset motherboard it will support the Intel Extreme Memory Profiles (XMP). In front of the DIMM slots there are a number of features that make the Maximus IV Extreme-Z motherboard “Extreme”. On the very corner of the Extreme-Z motherboard is the Debug LED. The first of the five switches on the ASUS Maximus IV Extreme-Z is the LN2 Mode switch. The LN2 Mode switch optimizes the Extreme-Z motherboard to remedy the cold-boot bug during the system post during Extreme cooling circumstances. Moving past the LN2 Mode switch, we have 9 voltage check points. These points include; DRAM, VCC SA/IO, NF200, PCH PLL, PCH, IGPU, CPU PLL, CPU, and a grounding point. We also have three buttons in this vicinity, Start, Reset, and the Go button. The final four switches just above the voltage check points are for the PCIe X16 expansion slots. Here you can disable the ones that you aren’t going to be using. 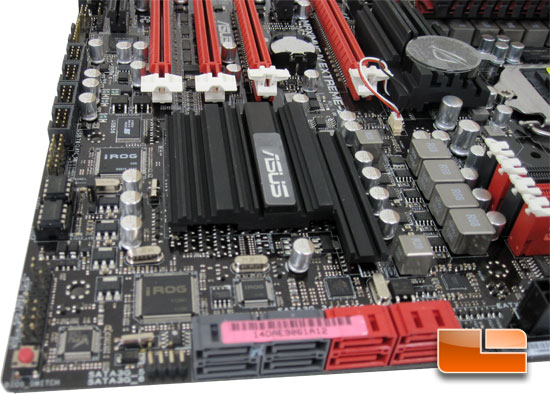 Sliding down the edge of the ASUS Maximus IV Extreme-Z we can see that the board is equipped with eight SATA ports. The four grey SATA ports are SATA II, while the four red SATA ports are SATA III 6Gbps. The pair of SATA III 6Gbps ports on the right are controlled by the Marvell controller, while the inner two SATA III 6Gbps ports are native to the Intel Z68 chipset. On the corner of the board is the BIOS switch, with the front panel pin out just above it. Moving further up the edge is the pair of BIOS chips, followed by four sets of USB 2.0 headers. We can also see the VPU, and three chips labeled with the iROG logo. 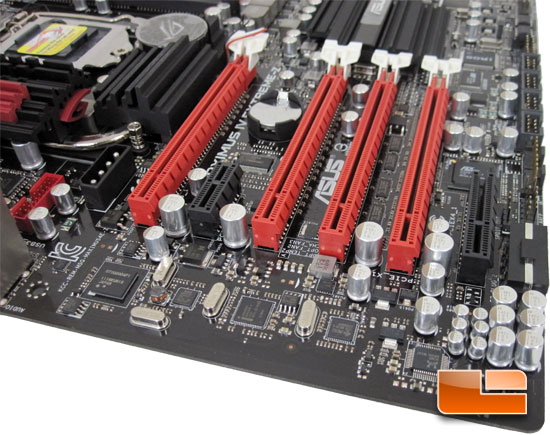 Following the four USB 2.0 headers is a pair of 4pin fan headers, front panel audio, SPDIF out, and a four pin molex power adapter. The four pin molex power will supply more juice to the PCIe X16 slots for those time when you just need more power. Working our way across the edge of the Maximus IV Extreme-Z we have the Realtek ALC889 Audio Codec, JMicron JMB362 PCI Express to x2 SATA II Host Controller, Intel WG82583V Gigabit Ethernet Controller, Intel 82579V Gigabit Ethernet controller, as well as the NEC D720200AF1 USB 3.0 controller. When it comes to expansion slots the ASUS Maximus IV Extreme-Z has no shortage. It comes equipped with four PCIe X16 slots, one PCIe x1 slot, and one PCIe X4 slot. I mentioned the four pin molex power on the edge of the board, though if you look to the left of the first PCIe X16 slot there is a second four pin molex! Continuing to the left of the second four pin molex we can find the internal SuperSpeed USB 3.0 header. Personally I’m not wild about the location of the internal USB 3.0 header. In order to take advantage of it you will need to run a cable across the motherboard to plug in. I would have like to seen it closer to one of the edges of the board to make cable management easier. 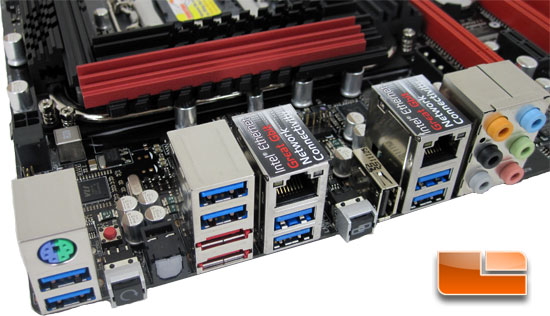 The ASUS Maximus IV Extreme-Z has a total of eight SuperSpeed USB 3.0 ports on the I/O panel. We also have a pair of eSATA 3Gb/s ports, optical SPDIF, two Intel Gigabit LAN ports, six audio jacks, a single USB 2.0 port which can be switch to ROG Connect, clear CMOS button, ROG Connect switch, and a removable Bluetooth adapter (not pictured). 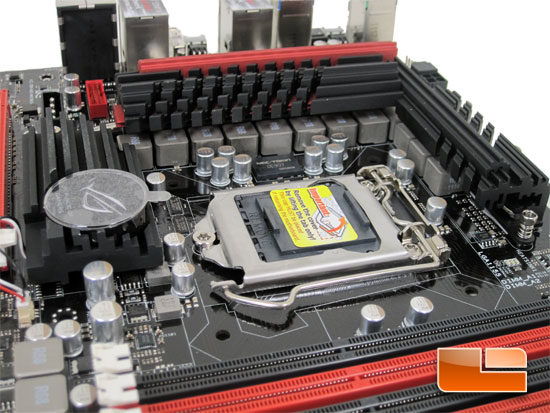 The area surrounding the ASUS Maximus IV Extreme-Z LGA1155 CPU socket is rather crowded. During our testing and setup we didn’t run into any clearance issues with the Corsair A70 CPU cooler. Though it’s something worth keeping in mind when building a system based on the Maximus IV Extreme-Z. On the left heatsink assembly is a Republic of Gamers emblem that Glows red and adds to the overall look of the board. If it doesn’t suit the look you are going for it is simple enough to unplug from the PCB. 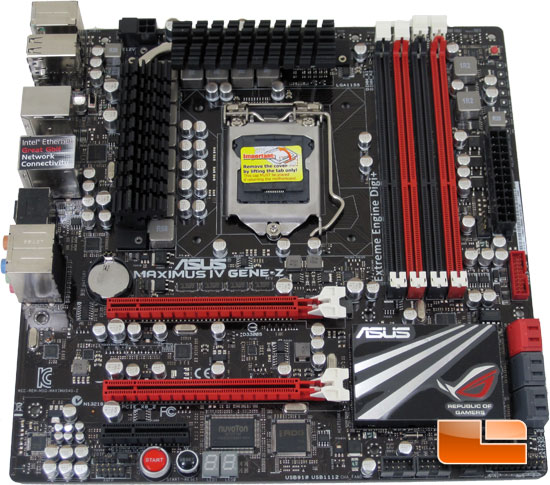 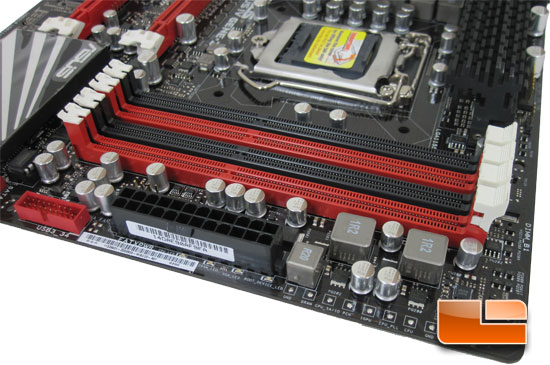 The ASUS Maximus IV Gene-Z features the same memory support as the Extreme-Z. Four DIMMS, up to 32GB DDR3 2200 (OC) in dual channel architecture. Along the edge of the board we have eight voltage check points: 2 ground, DRAM, CPU SA/IO, PCH, IGPU CPU PLL, and CPU. Moving past the 24 pin motherboard power is the internal SuperSpeed USB 3.0 header. This is a much better placement for it than we saw on the Maximus IV Extreme-Z. 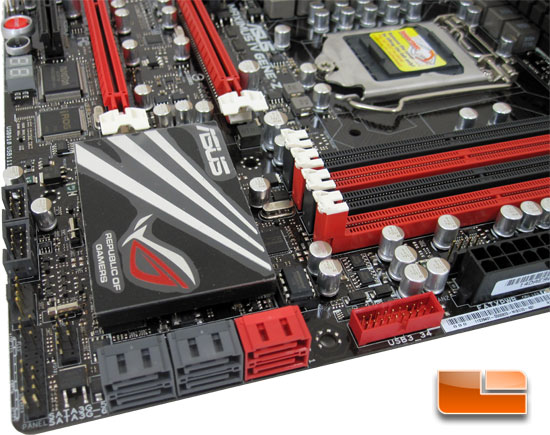 Sliding down the edge of the ASUS Maximus IV Gene-Z we have the six native SATA ports, the four grey are SATA II 3Gbps while the pair of red are SATA III 6Gbps. Starting the trip up the left edge of the board we have the front panel pin out, 4pin fan header, and two internal USB 2.0 headers. Just behind the SATA III 6Gbps ports we can see the BIOS chip and the ASUS Republic of Gamers heatsink that keeps the chipset nice and cool. 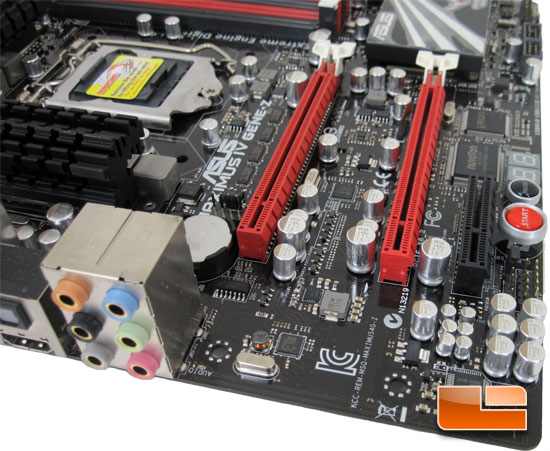 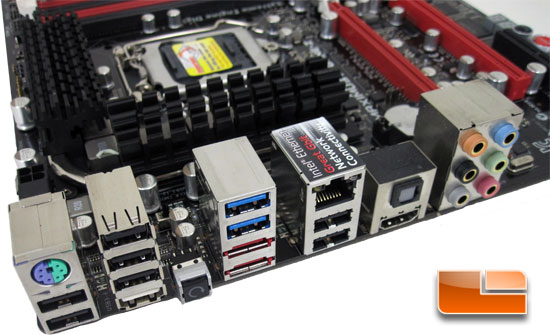 The I/O panel of the ASUS Maximus IV Gene-Z has everything you would expect to find on today’s motherboards. Stacked with 10 USB ports, eight USB 2.0 and two SuperSpeed USB 3.0 ports, two eSATA ports, a single PS/2 port for either a keyboard or mouse, HDMI, optical SPDIF, Intel Gigabit LAN, six audio jacks, and a clear CMOS button there is no shortage of connections here. 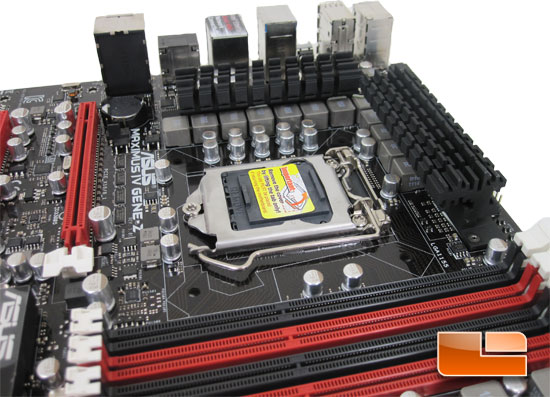 The area surrounding the Intel LGA1155 socket had plenty of room for our Corsair A70 CPU cooler with a single fan, we weren’t able to add the second fan. Though that is due to the Corsair Vengeance memory kit with tall heat spreaders interfering. We had no clearance issues with our CPU cooler of choice and the heatsink assemblies.