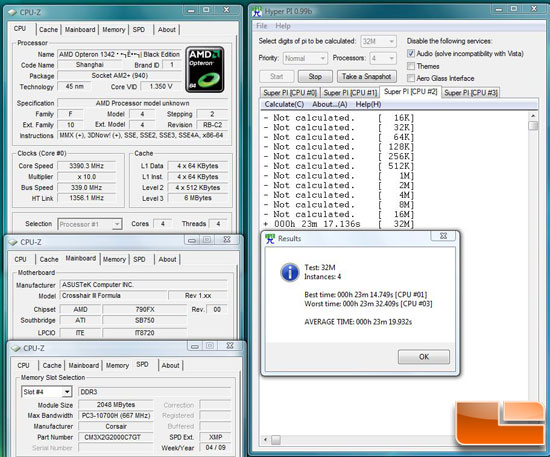 Normally I’d slam my LN2 pot on the processor and whack out a 6.5GHz CPU-Z shot but I’m currently out of LN2. Since I was using my Phenom II 42 TWKR and it isn’t the best chip on air I decided to focus on HTT overclocking. It seems since socket 939 we’ve kind of been hovering around 320-340MHz HTT and the Crosshair III Formula doesn’t fail to deliver. 339MHz HTT while running 4 instances of Super Pi 32M is no small feat. Strangely enough 339MHz HTT is rock solid stable but 340MHz HTT is an instant crash when loaded and it doesn’t clear up past 350MHz HTT. Take it as you will, but when coupled with some locked multiplier chips 339MHz HTT should be sufficient for air or the warmer sub-ambient cooling options like single-stages and dry ice.