When we thought about writing this little article, we ultimately hoped to find out how the CPU would perform when it was stressed to the point that XFR disabled itself.  We were uncertain if air cooling would be sufficient in keeping the CPU cool enough, so XFR would not turn off.  We knew that the liquid cooler would be able to handle the load just fine, but wanted to use it as a baseline as well.  What we ended up finding was rather interesting.

To start, we found that our 1800X idled at darn near ambient temperature, even on our air coolers, which is incredible!  Typically with our Intel CPUs, we find that it idles a few degrees above ambient, regardless of how awesome the cooler is.  For the 1800X to basically not excess heat into your chassis or room is beyond great, even if we’re only talking idle.

When we hit loads under 7-Zip and Handbrake, the results were still excellent for all coolers tested.  We found that there was very little difference between the three coolers tested, as they all completed their tests right around the same elapsed time.

Since each cooler cooled the 1800X so efficiently, we had to find a way for the CPU to hit higher temperatures, namely that 60*C mark, to find out how the system performed.  With some fiddling around, we found a way to make this happen, and what we found was rather interesting.  We noticed that the CPU was throttling itself back for a couple seconds and then went right back at it.  In this throttle back, the CPU had a chance to cool off a little bit, but this was at the cost of performance. 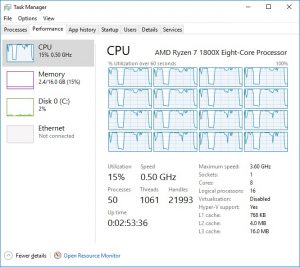 So what did we figure out here?  We found that if your CPU is hitting 60*C, you will see a noticeable hit in performance.  This means that if you have intentions of overclocking this CPU, you will want adequate cooling – namely in the form of AIO liquid coolers.  The Handbrake test that we ran, went from 26 minutes 55 seconds to 29 minutes 26 seconds.  This is an increase of approximately 2.5 minutes, and while it isn’t a lot, someone who is in a rush or doing a lot of transcoding will not be too happy. 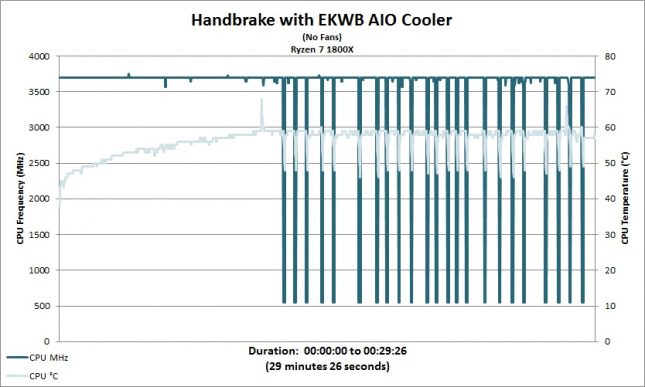 Legit Bottom Line:  If you plan to overclock and use your Ryzen 7 1800X for various demanding multithreaded applications, you’ll absolutely want adequate cooling or you’ll find your CPU throttling itself back, costing you precious time.