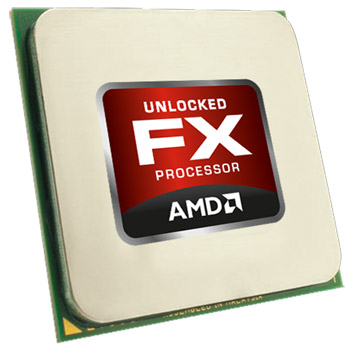 When AMD launched the Zambezi-FX processors this week based off ‘Bulldozer’ core architecture they realized that these 8-core 32nm processors might need enhanced cooling. To solve this situation, AMD decided that with the FX Series CPU’s they would have an option for a retail boxed processor that includes a self contained water cooler rather than the typical air cooler. This is the first time AMD has ventured into offering a water cooling kit for the public, which should be very interesting for our readers. AMD is only offering a water cooler option with the flagship FX-8150 processor and in test regions right now. This is going to be a trial run for AMD to see how the product sells and if enthusiasts will embrace the idea of water cooling. Water cooling is nothing new for us or our readers, so we have a feeling that it will go over well and are happy to see AMD noticing that enthusiasts would like to have improved cooling options from the start. 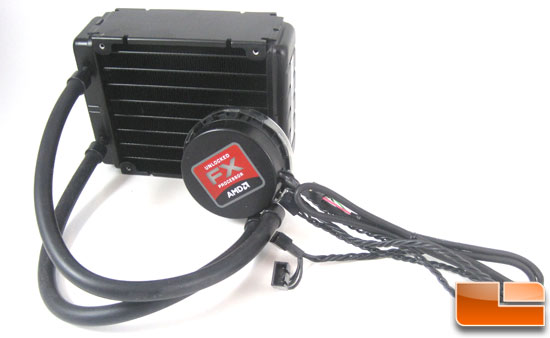 To launch the company’s first water cooler they teamed up with no other than Asetek. The folks at Asetek were one of the first companies to offer closed loop water coolers and are also the original manufacturer
behind popular water cooling kits like the Corsair H50 and H70 and the Antec Kuhler 620 and 920.  The AMD kit resembles the Antec Kuhler 920 the closest. From what we have been told, it’s basically the same as the Antec Kuhler 920 but with cosmetic tweaks and Chill Control software tweaks. The unit features a single 120mm double thick radiator, with twin 120mm fans. The pump/cold plate housing is a low profile design and is connected to the radiator with flexible non-corrugated tubing. The flexible tubing helps relieve stress on connections as the tubing doesn’t try and straighten itself. It also helps in the install because it bends easier and you are not fighting the stiffness of the tubing to get parts where you want them. The top of the pump housing is the AMD FX logo. The FX part of the logo is back lit with RGB LED that the color can be changed by the user in the Chill Control interface. 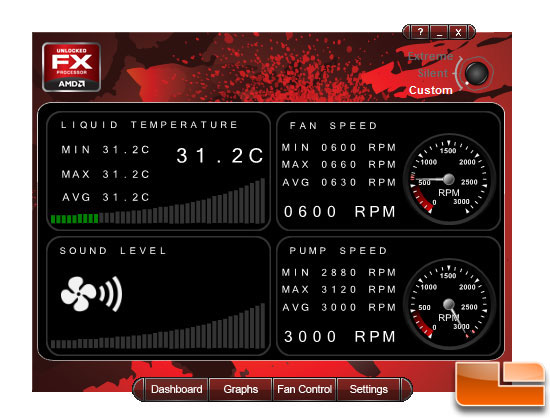 The Chill Control software works in conjunction with an internal USB connection to the pump housing to control the unit’s performance setting and monitor the fan speed and water temp.

AMD said that on air we should be able to reach up to 4.6GHz on all cores, and up to 4.9GHz under water. These aren’t guarantees, but a reference for what we might be able to reach with a solid platform. So we have our targets, now let’s take a quick look at the specifications for the AMD water cooler before we move on.