Many of our readers love the Do-It-Yourself (DIY) approach when it comes to portable hard drives as it allows you to use drives that you already might own and will usually save you some money. Right now there are a ton of USB 3.1 Gen 2 Type-C to M.2 SSD enclosures on the market to pick from. It can be overwhelming trying to find the right enclosure, but thankfully there are only a handful of bridge chips being used inside. The most widely used bridge chips come from JMicron, ASMedia and Realtek and the manufacturer usually discloses what model is being used in the product specifications.

JMicron has the most enclosures on the market as the JMS583 bridge chip design wins were impressive. The first revision of the JMS583 controller (A0 hardware revision) came to market with some issues that were later fixed with the updated ‘A2’ version of the controller. Since JMicron was having compatibility issues, many storage enthusiasts were seeking enclosures based on the Realtek RTL9210 or ASMedia ASM2362 controllers as alternatives. The ASMedia 2632 controller is used on Crucial X8 portable SSD series (review) of pre-built drives as well as the ASUS ROG STRIX ARION M.2 NVMe SSD enclosure. The ASUS ROG STRIX ARION runs about $65 for just bare enclosure and not everyone needs RGB lighting on their portable drive.

That brings us to the Alxum Aluminum M.2 NVME SSD Enclosure that is sold under part number AX-S202AGY at places like Amazon for $35.99 shipped. This enclosure uses the ASMedia 2362 and is capable of 10Gbps data transfer speeds as long as you are connected to a USB 3.1 Gen 2 port and the NVMe SSD that you are using is capable of reaching those speeds. Alxum backs this enclosure with a 2-year warranty from the date of purchase. Most portable SSD enclosures come with a 1-year warranty, so a 2-year warranty seems exceptional. 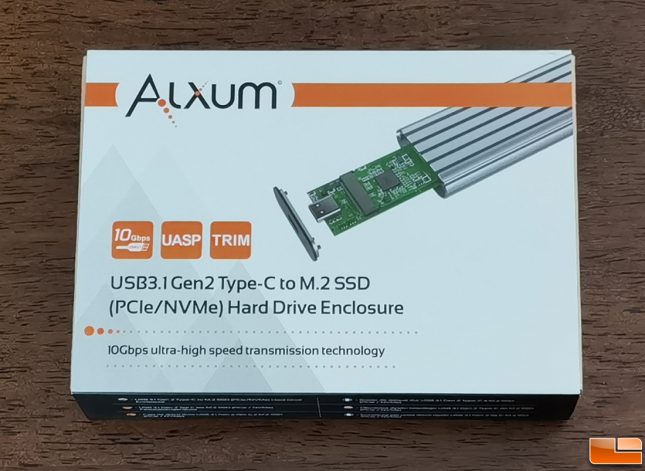 Alxum might not be a familiar name to you as the company is Hong Kong based and was just created in 2018. The Alxum Aluminum M.2 NVME SSD Enclosure was first listed on Amazon in May 2019 and has a 4.5 star out of 5-star rating with 50 or so reviews. So, it has been out for over a year and is just new to us as this is our first time working with Alxum. 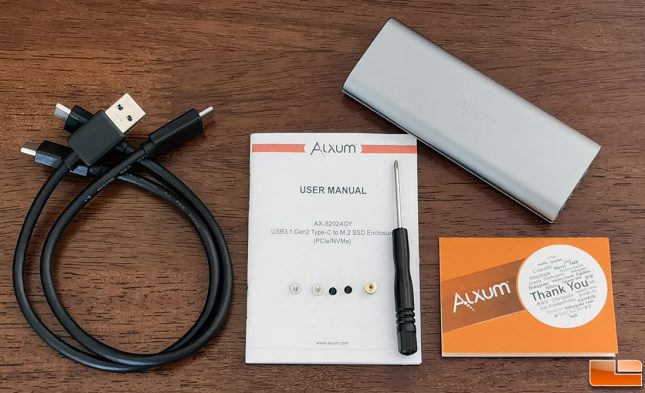 Inside the packaging you’ll find the drive enclosure, mini Philips screwdriver, USB C to USB C cable, USB C to USB A cable, SSD fixed set screw, user manual, thank you letter and screws for the SSD and enclosure. Alxum includes two extra screws for the enclosure and an extra SSD hold down screw, which is excellent! The screwdriver isn’t the best quality, but will get the job done as long as you don’t over tighten things. 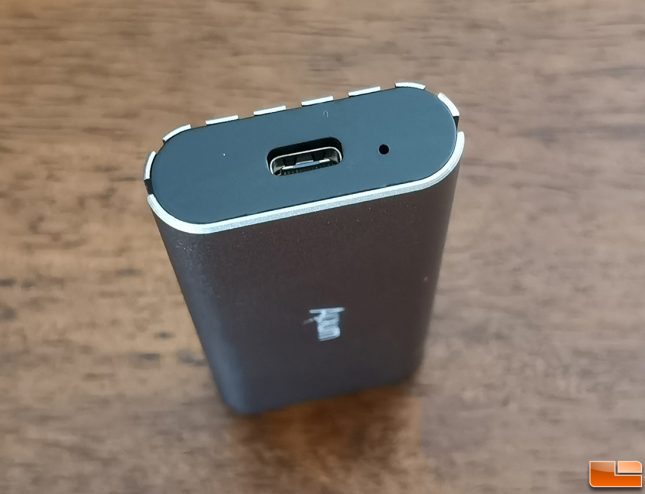 On one end of the Alxum Aluminum M.2 NVME SSD enclosure you’ll find the USB Type-C port and an LED status light. When portable SSD is on and at idle the light stays on, when data is being read or written it blinks and when the drive is in sleep the light cycles on for a second and then off for three seconds. As you can see from the image above there is a large gap around the USB Type-C connector and this enclosure has no IP (Ingress Protection) dust or water rating. 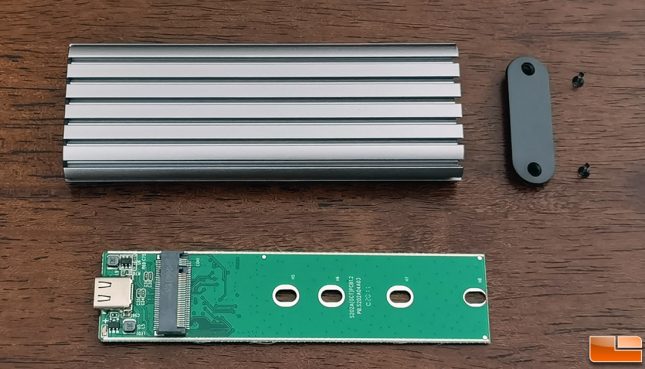 Removing the two screws on the other end of the drive will allow you to remove the Printed Circuit Board (PCB) inside. You’ll need to pull this board out to install your NVMe M.2 SSD (M Key) and then put it back together. There are four holes in the PCB for the included standoff that allows for the support of 2230, 2242, 2260 and 2280 drives. The drive installation process is super easy and will take just a couple minutes to complete.

We should point out that no thermal pad is included, so the NVMe SSD that you use will not make contact with the aluminum body of the enclosure.  The fancy ribbed exterior looks like it would be a useful heatsink, but no direct contact is made with anything other than the edges of the PCB. If Alxum was wondering what they need to do to improve this product… Our suggestion would be to improve the fit and finish. Figure out a way to use a thermal pad to allow direct contact between the drive and the aluminum housing and maybe lessen the movement of the PCB in the enclosure.

Flipping the PCB over we finally get a glimpse of the ASMedia 2362 USB 3.1 Gen2 to PCIe chip that we talked about in the introduction. 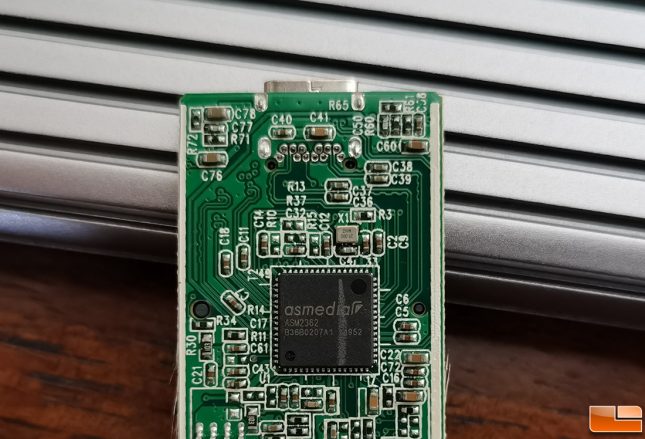 Here is a closer look of the ASM2362 bridge chip used on the drive that we are about to show you benchmark results with. It was made in week 52 of 2019, so is fairly recent considering this bridge chip first came to market in 2018. 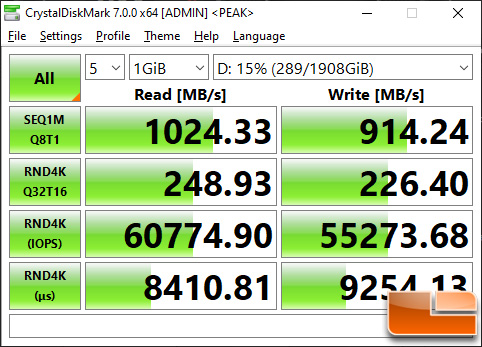 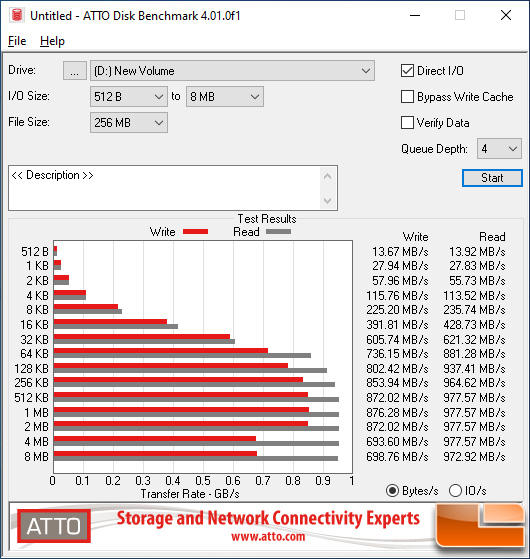 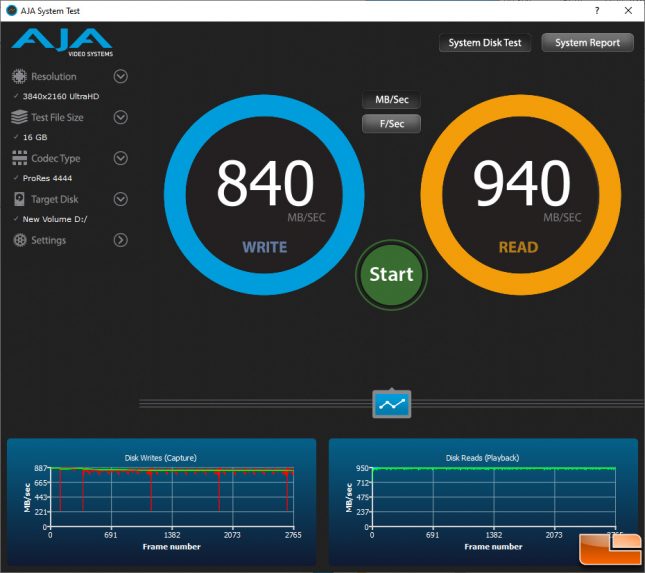 Looking at more realistic tests like the AJA System Test from AJA Video systems shows that we were getting 940 MB/s read and 840 MB/s write speeds using the largest test file size of 16GB. 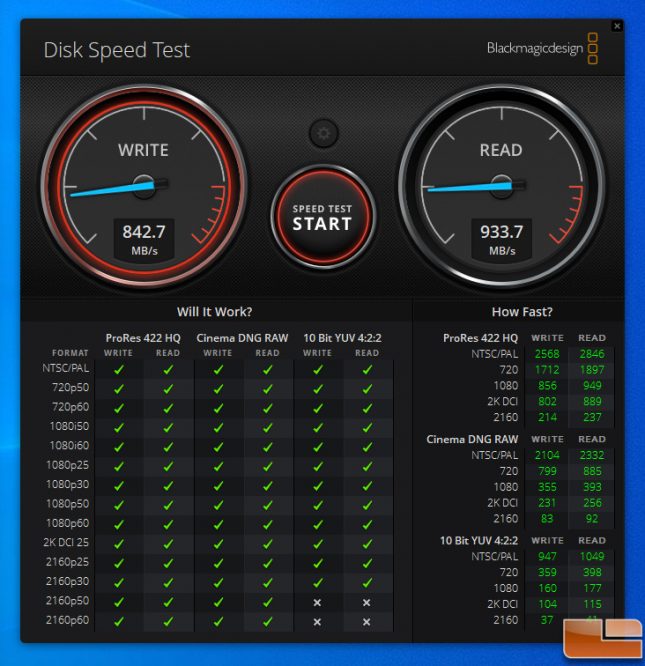 The final benchmark that we ran was the Disk Speed Test from Blackmagicdesign and it showed 934 MB/s read and 843 MB/s write speeds and that this enclosure setup will work with 1080 Full HD and 4K Ultra HD content! The performance from the Alxum Aluminum M.2 NVME SSD enclosure will depend on the drive that you put in it and the system that you run it on, but this will give you an idea of the potential offered by Alxum with this enclosure. 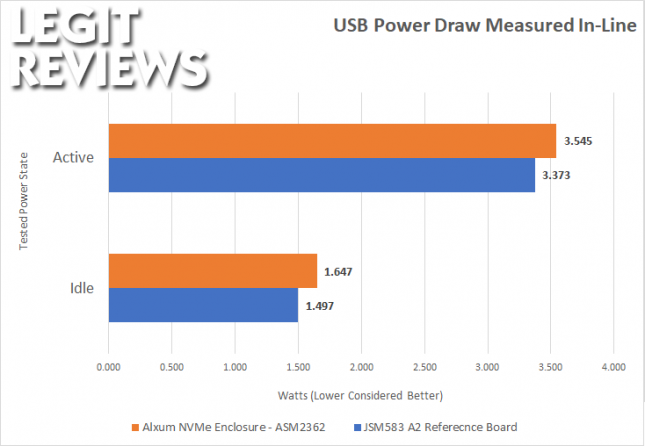 At the end of the day the Alxum is one of the most affordable DIY portable SSD enclosures that features the ASMedia 2362 bridge chip. Performance will greatly vary depending on what drive you are using, but you should get near 1,000 MB/s read and 900 MB/s write speeds from what our testing showed. We ran our tests on a dirty 2TB NVMe SSD that was 15% full of random files that we transfer between systems in NVMe enclosures. Our numbers might not be the highest around for the Alxum Aluminum M.2 NVME SSD enclosure, but they should be representative of what you can expect to see in the real world.

We didn’t show it in the review, but we actually tried out over 30 different SSD models in the Alxum enclosure and all worked great except one, the Crucial P5 SSD series (review). We then tried other external drives that features the ASMedia 2362 chip and all had the same issue where the system would freeze if the drive was plugged in. We’ve reached out to ASMedia and Crucial to make them aware of the issue, so hopefully that is something that can be fixed on the firmware side by either company. 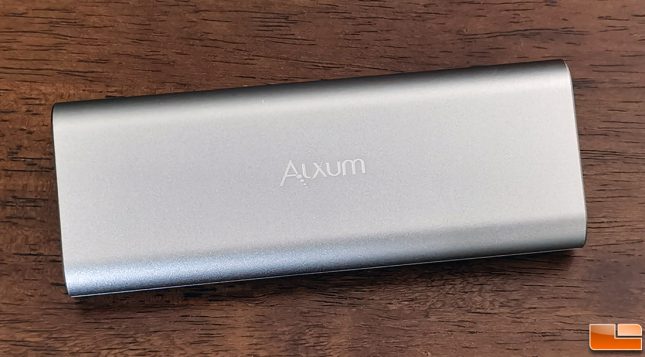 At $35.99 shipped, the Alxum Aluminum M.2 NVME SSD enclosure (part number AX-S202AGY) delivers solid performance and is backed by a 2-year warranty. It uses the prized ASMedia 2362 controller that has been a fan favorite of storage enthusiasts and is available at affordable prices thanks to Alxum!