Alphacool is a new-to-me product, and I actually quite liked what I saw.  The cooler is pretty simple in terms of design, the hardware to install is very easy to work with, and the performance blew me away!

Now don’t get me wrong, the cooler is simple in design, but it actually looks really nice.  The pump that’s integrated with the cold plate looks really nice with the glowing Alphacool logo and the side window.  My chassis doesn’t have a window, so I’ll never see it again in this case, but for those who do have windows will really like the aesthetics here. 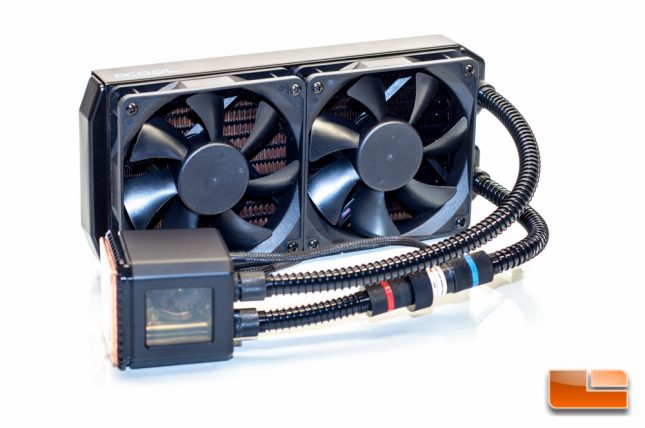 Installation was extremely simple, and I greatly appreciate that with coolers.  There have been a few times where I got a little annoyed with the installation techniques of coolers, but even not having any instructions on how Alphacool intended for this cooler to be installed, figuring it out and installing is was a total breeze.  There is not much the end user needs to do to prep the system, other than installing the fans, snapping on the mounting bracket, and then installing the mounting screws.

Performance is where this cooler actually blew me away.  This cooler did extremely well with Prime95 at the stock 3.9 GHz turbo frequency on the 4770k, so well that it was the top of the chart!  Overclocking yielded a fair change in temperature, but it was still sitting just 0.3 degrees C from meeting the top cooler, and that was enough to keep me impressed.  Power consumption from the cooler was spot on with other coolers, so I have nothing more to say there. 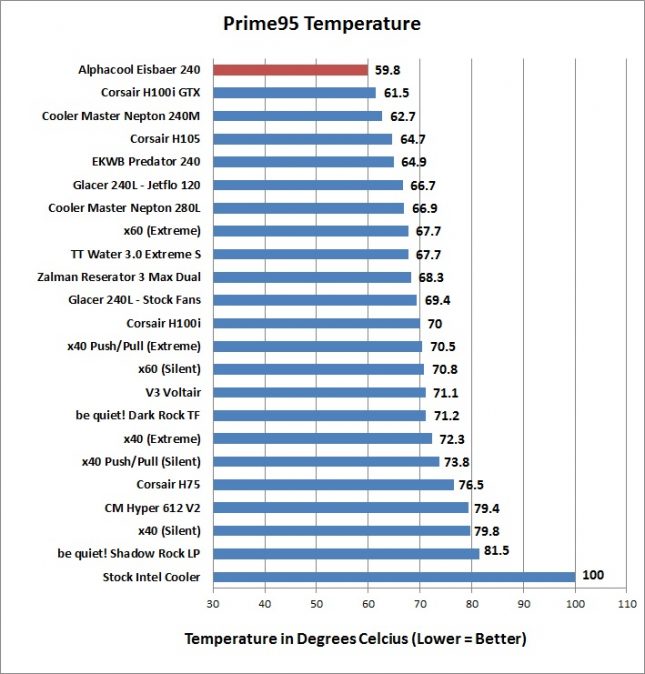 The only thing that I would have to nitpick on, is the fact that the fans get rather loud when the system is under a heavy load.  At idle or low loads, the fans are very quiet, but load, be prepared for some noise.

Cooler reviews from me will be changing in the near future.  For starters, I have an entirely different system that will be used for cooler reviews, using Windows 10 and still a 4770k.  With this system, I’ll choose a few of the previous top performing coolers to have as data points and put the new coolers against it.  Thermal paste will no longer be the factory paste, but rather a Noctua NT-H1 paste across all coolers.  Finally, if you haven’t noticed, I actually introduced one change in this review, and that was to omit gaming and encoding benchmarking.  Why did I do this?  It really didn’t make too much sense to spend time benchmarking to obtain a game’s temperatures, as you’ve got a good baseline (idle), and the absolute max that you’ll see with the cooler from Prime95.  Prime95 is a synthetic benchmark that will provide you with completely absurd numbers, numbers that you will probably never see in real world testing. 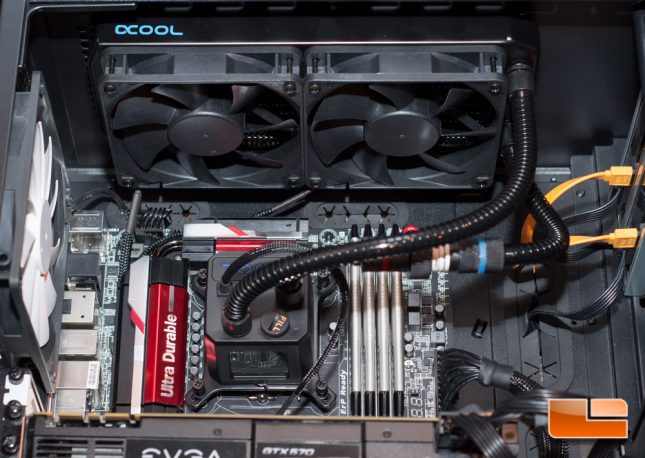 You can find some Alphacool products on Amazon, but this particular kit was provided to us by AquaTuning.us.  The Eisbaer 240mm kit has a retail price of $129 USD, which is right where I expected it to be.  You will be able to pick up your own Alphacool Eisbaer 240mm AIO kit from AquaTuning.us, ModMyMods.com, or Performance-PCS.com for at or around $129 USD plus shipping to your country.  We’re told that Amazon will eventually carry this cooler, but initially you will find it at the aforementioned sites.

Alphacool provides a 3 year warranty on this cooler, so as always, if something unexpected goes wrong, you’ll have their support.

Because of the excellent performance, easy-to-install system, and great looks, I cannot hesitate to throw up the recommend flag here!  The price of this cooler is also competitive, which makes it that much more appealing!

Legit Bottom Line:  Alphacool’s Eisbaer 240mm AIO cooler is an exceptional performer, looks great, and will not rack your brain when trying to install it.