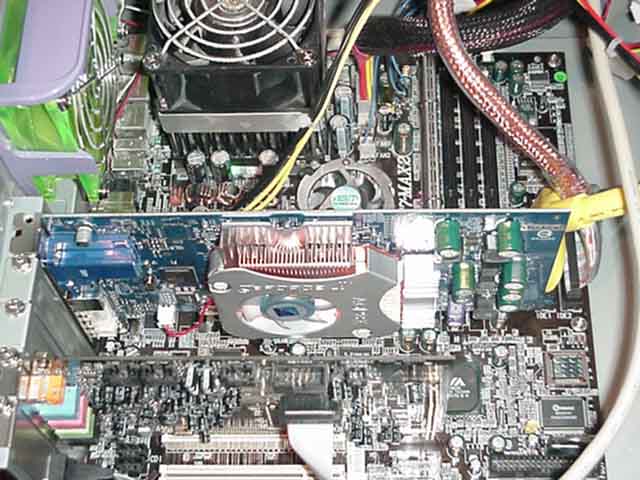 All testing was done on a fresh install of Windows XP Professional build 2600. All benchmarks were completed on the desktop with no other software programs running. For overclocking the videocards, we used the built-in overclocking feature that is included with the Nvidia 41.09 drivers. We were also using VIA Hyperion version 4.45 4in1 drivers. Our testing processor was running unlocked at 166FSB and a 10.5 multiplyer giving us a grand total of 1.75ghz. During this review, the room temperature was 25 degrees Celsius, while the case temperature was 29 degrees Celsius.

3DMark2001SE build 330 is the latest installment in the 3DMark series by FutureMark. By combining DirectX8 support with completely new graphics, it continues to provide good overall system benchmarks. 3DMark2001SE build 330 was created in cooperation with the major 3D accelerator and processor manufacturers to provide a reliable set of diagnostic tools. It demonstrates 3D gaming performance by using real-world gaming technology to test a system’s true performance abilities. All tests were run at 1024×768 at 32-bit color and then again including 4x AA.

The first chart shows the results without AA.

Results: 3dMark2001SE build 330 shows that Albatron Ti4680 is the fastest at default clock speeds and when overclocked. The Albatron Ti4680 easily passes up the default and overclocked MSI Ti4680 competition. This could be due to a number of things, but faster memory and card layout are likely to be the key factors.

The first graph is with our two test cards at their default settings.

The next graph looks at how the cards perform while overclocked.

Results: What can you say from this benchmark??? No significant difference can be seen from Chameleon Mark!

The Comanche 4 benchmark demo is a unique benchmark as it represents a real-world gaming experience. It contains the single player Eagle’s Talon mission from the game as well as a detailed cinematic. This DirectX 8.1 benchmark demo measures your system’s performance in the standard frames per second format. On this benchmark, we tested our cards at 1024×768 x 32-bit and the audio turned off.

The first graph is with our two test cards without AA.

The next graph shows our results using 4x AA to put even more strain on the cards.

Results: The data shows that the Albatron Ti4200 Turbo is able to out-perform its big brother by a small margin.

The Codecreatures benchmark is written with Microsoft’s DirectX 8.1 API and incorporates the use of Vertex and Pixel Shaders popular on next generation 3D accelerators. The benchmark plays a photo-realistic nature scene and calculates the performance of the graphics adapter by measuring the FPS that it can display at 1024×768, 1280×1024 and 1600×1200 resolutions. The score is a geometric mean of those three resolutions called the Codecreatures number. We should point out that we changed our memory to a 512mb module of Corsair PC-3200C2 since 512mb of memory is needed for this benchmark.

The first graph is with our two test cards without AA.

The next graph shows our results using 4x AA to put even more strain on the cards.

Results: I really love this benchmark because it tends to push the cards harder than any other benchmark I use. I also feel that this benchmark is one of the future, since pixel shading and graphics seem to be going in this direction. This benchmark shows no significant difference between the cards. Keep in mind the Ti4680 is running 5mhz faster on the memory when overclocked.

That concludes the benchmarks that I picked to run on our test cards. Let’s go on and see my final thoughts on the Albatron Ti4680P Turbo.