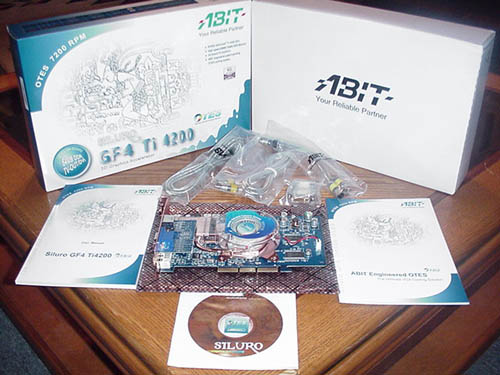 The software bundle that accompanied the Siluro GeForce4 Ti4200 OTES was nothing amazing, but did come with everything needed to get going. Currently no games come bundled with the card. Abit did include a detailed user manual that contained some thorough information. Abit also explained many of the available settings in the video card drivers. There was also full details for each of the additional software packages included on the Installation CD. Abit provided all the necessary cabling to access each of the card’s outputs including a TV-Out Y-adapter with a standard RCA connection as well as a S-Video connection for digital output. A DVI to VGA adapter was included for connecting a CRT monitor to the DVI port. So everything needed to use the card is included in the original purchase, which is a plus. 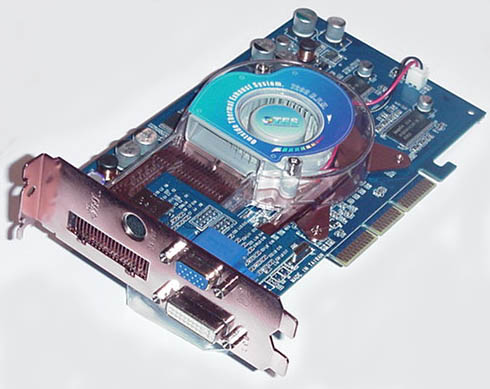 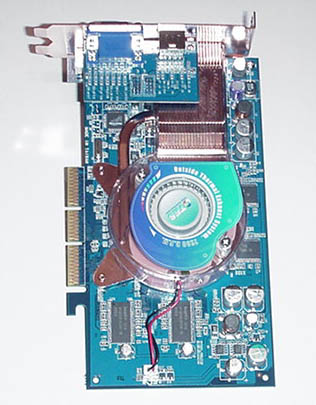 The most interesting feature on the OTES would be the card cooling. The Outside Thermal Exhaust System is not a brand new idea, but Abit incorporated it into the video card market. It works by using a liquid filled heat-pipe that absorbs the heat created by the GPU and then pull its away. As the heat is absorbed from the GPU, the internal liquid of the heat pipe vaporizes and is then carried to the rear end of the card where a 7200RPM fan blows the GPU generated heat out of the system across copper cooling fins. The fan itself is in an enclosure which directs the airflow out of the system through a rear exhaust port, thus removing the warm air out the case alltogether.

Now it should be noted if you are building a silent computer that the cooling fan, which spins at ~7,200rpm, does make quite a noise. On our test system it could not be heard over the other fans running to cool the case, but due to the strong fan and design it lowered the internal case temperature about 5 degrees. Also take note that the fan does use the PCI slot located next to the AGP slot. So if you can not afford to lose a slot this may become an issue. We always advise to leave this slot open so the card cools better, so this was not an issue with our set up.

Next we will see how this card performed on our test system!