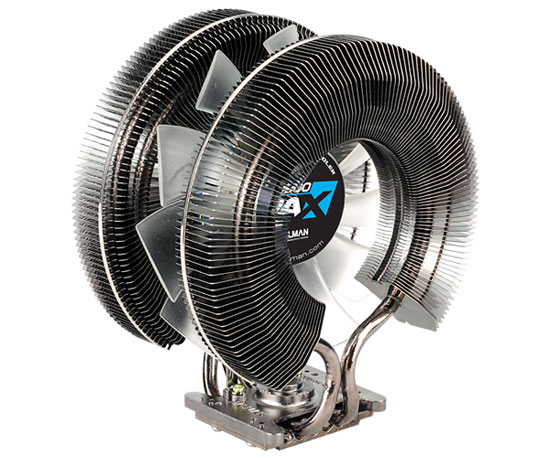 Zalman has been around since the late 90’s and has been cranking out coolers that not only perform well, but look good doing it. Zalman has since developed a wide range of products from air cooling, water cooling, fans, cases, power supplies, storage and even monitors. My first experience with Zalman was around 5 years ago with the CNPS9700 LED CPU cooler. It was a strong performer for years for me, and it can still be bought to this day. Today we are looking at the newest incarnation of that cooler design, the CNPS9900 MAX.

The CNPS9900 MAX looks to be the same basic concept and the design most older enthusiasts think of when they hear Zalman’s name. The cooler has a barrel shape to it with a center mounted fan. The heatpipes are bent into a circle.

The CNPS9900 MAX has what Zalman calls composite heatpipes. The heatpipes are a combination of axial groove type and sintered metal type heatpipes. Zalman says this combination increases the heat transfer rate by 50% when compared to ordinary heatpipes.

Features of the Zalman CNPS9900 MAX

Specifications of the Zalman CNPS9900 MAX