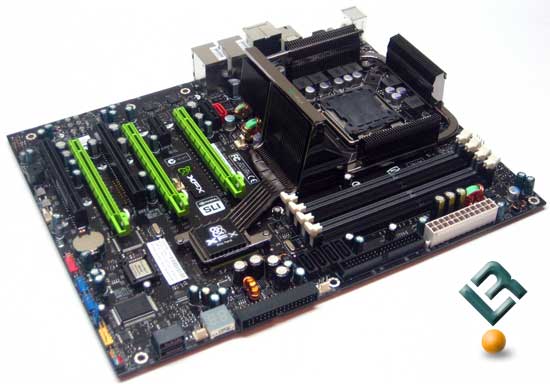 Probably the most fun I have ever had with a motherboard had to be with the Nvidia 680i Ultra and the 650i chipsets.  I loved the ability to link or unlink the FSB and the DDR speeds. They did go through some growing pains, but all in all the boards were solid performers and were just a blast to work with.  It made for easy overclocking and really gave you the ability to overclock the heck out of every piece of equipment in your rig.  I have enjoyed the recent releases of chipsets like the P35 and the X38.  I am getting ready to get my hands on some x48 boards, and I have to admit that I might be just a little giddy about that.  But today, I have something on the bench that I have been waiting for… the Nvidia 790i Ultra chipset!  Also, as I will explain throughout the review, this was really a fantastic experience!

This is the first time we have gotten to look at the 790i Ultra chipset.  It is nVidia’s flagship board, and their answer to the Intel X48 chipset.  While the 780i SLI was really based off of the 680i with some modifications (as Nate showed us in his review of the 780i), the 790i Ultra is fresh.  When we say fresh, what we mean is a new north bridge, as the south bridge is still a familiar friend that has been around since the 500 series of nVidia motherboards.  This new north bridge also brings real PCI-E 2.0 boasting 32-lanes of bandwidth (instead of the hacked bridged 1.1-2.0 setup on the 780i boards), a new memory controller that now has support for 1600MHz FSB, 1333MHz DDR3 and EPP  (but also boasts compatibility up to 2000MHz DDR3).  The chipset actually comes in two flavors: the 790i SLI and the 790i Ultra SLI.  Binning for higher overclocking is basically the only difference between the two boards; they are basically the same boards with some BIOS optimizations for the Ultra version.  The Ultra version is the board that boasts memory compatibility up to 2000MHz.  We have the XFX 790i Ultra motherboard to check out in this review.  How will it stand up against the recent Intel chipsets?  We intend to find that out and more as we dive into this thing.  First off, let’s look at the specs of the board. 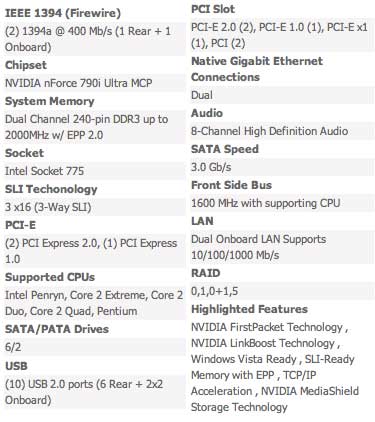 Let’s take a closer look at the board…