These days many consumers and enthusiasts are looking for massive storage capacities, and for more than a year the largest capacity desktop hard drive that you could buy was 2TB. All that changed today when Western Digital announced the world’s first 3.0 Terabyte drive that is available for internal desktop use! These massive drives offer plenty of capacity for storage-intensive programs and space-hungry operating systems, like Windows 7 x64, with plenty of room left over for photos, music, and HD video content. It also makes perfect sense to use as a storage drive on a system that uses a Solid-State Drive (SSD) as the primary drive. The vast majority of SSDs are under 256GB, so it makes sense to have a nice storage drive to keep all that data you don’t need to open often. Another market that has been craving larger drives is network storage. These new 3TB drives offer 50% more storage capacity than anything on the market today, so that will greatly expand what can be stored on a NAS.

WD states that with a 3TB hard drive you can store the following:

The big news today is that Western Digital is announcing a pair of new drives in their popular Caviar Green family of 3.5″ desktop drives. The first offering is a new 2.5 TB hard drive (model number WD25EZRSDTL) with a $189 MSRP and the drive that we have been talking about so far, which is the 3 TB hard drive (model number WD30EZRSDTL) that is listed at $239.00. We were a bit shocked to see pricing on the 3TB drive as last fall the WD Caviar Green had a street price of $209! 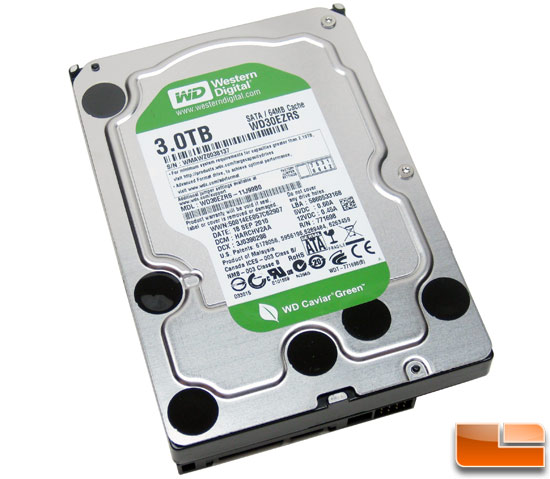 The drive that we will be reviewing for you today is the WD Caviar Green 3 TB. As you can see from the image above this drive looks no different than any other WD 3.5″ desktop drive, but trust us, it has four 750GB platters inside that make it very different any other drive on the market today. Those four platters don’t get that loud, though, as WD rates the acoustics at idle at just 24 dBA and then ranging from 25-29 dBA depending on your seek operation. Power consumption is also not bad as standby/sleep is just 0.80W, idle is 5.5W and read/write operations pull just 6.0W of power. 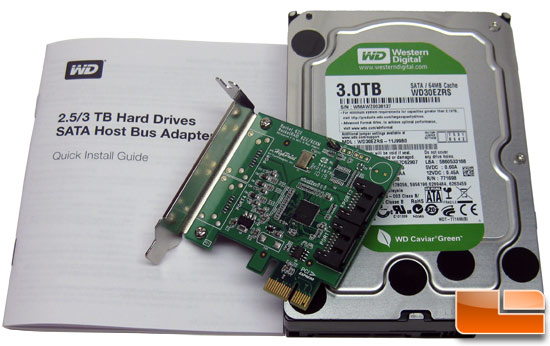 The WD Caviar Green 2.5TB and 3TB drives have capacities in excess of 2.19 TB and this presents barriers for PC hardware, firmware and software. To get around these issues WD is bundling its WD Caviar Green 2.5 and 3 TB hard drives with an Advanced Host Controller Interface (AHCI)-compliant Host Bus Adapter (HBA), which will enable the operating system to use a known driver with correct support for large capacity drives. WD supplied us with a HighPoint RocketRaid 620 PCI Express 2.0 x 1 SATA III (6.0Gbps) controller card to use with the hard drive. This RAID card retails online for $59.99 plus shipping and for one to be included with the 2.5TB and 3.0TB drives is a nice touch. 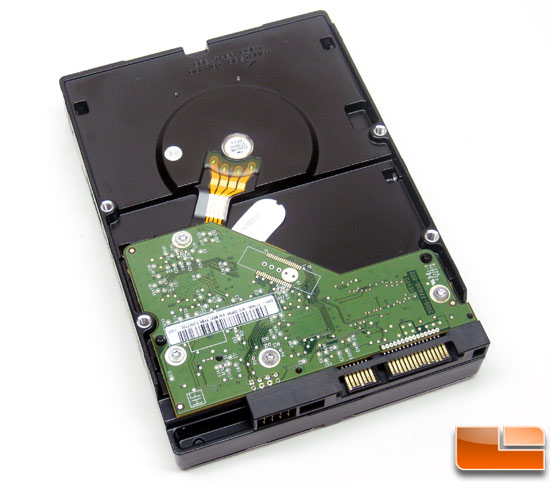 Flipping the 3TB hard drive over we can see the green PCB that is the ‘brains’ behind the drive and on the other side of this PCB you’ll find the 64MB cache chip and other goodies like that. 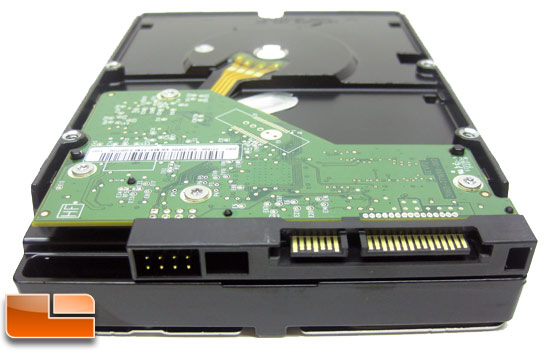 Here is a better look at the Serial ATA (SATA) II header and the SATA
power connector on the Caviar Green 3TB drive. The SATA II 3Gbps storage
interface is backwards-compatible with SATA I and also works on SATA
III 6Gbps headers as well. The drive also has jumpers on it, but as many of you are aware, jumpers are seldom used on current operating systems.