Western Digital (WD) is likely one of the first brand names that came to mind when thinking about platter-based hard disk drives (HDDs), but don’t think for a second that they are not a major force to be reckoned with in solid-state drive (SSD) market. WD has really been making headway in the NAND Flash based internal drive market with solutions for general computing, gaming, NAS, and enterprise users. So, as consumer hard drive sales slow down in the notebook and desktop PC market, the company has been able to reap the benefits of the adoption of SSD-based products. WD is even shipping NVMe SSD solutions for the next-generation game consoles that will be launching soon.

As 2019 came to a close then-CEO Steve Milligan announced that the flash memory market passed the “cyclical trough” and was ready to enter an expansion period. WD has since introduced more SSD-based products to market and has heavily focused on gamers. Gaming is a big market where consumers are willing to open their wallets to pay for hardware that will get them better performance and speed. If you want to become a champion on your favorite game and get the edge over rival streamers, you’ll need top-performing storage drives! 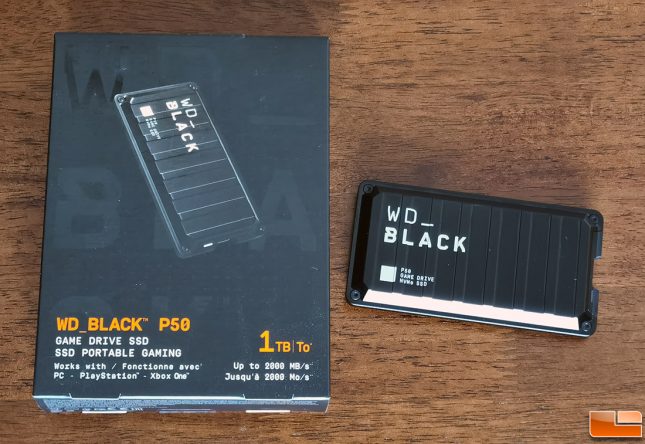 That brings us to the product that we are going to be looking at today, the WD_Black P50 Game Drive SSD (product page). This drive was designed from the ground up for gamers and utilizes the USB 3.2 Gen 2×2 interface for transfer speeds of up to 2000MB/s! Granted no gaming console and only a very few desktop PCs feature a proper SuperSpeed USB 20Gb/s (USB 3.2 Gen 2×2) port.

This drive is aimed at the premium market for those that are looking for a storage solution that will work for years to come. And why not as the P50 Game Drive is available in 500GB, 1TB and 2TB capacity models and all are backed by a 5-year warranty. The P50 Game Drive will give both PC and console gamers the extra capacity they need at blazing fast speeds in a highly portable form factor. 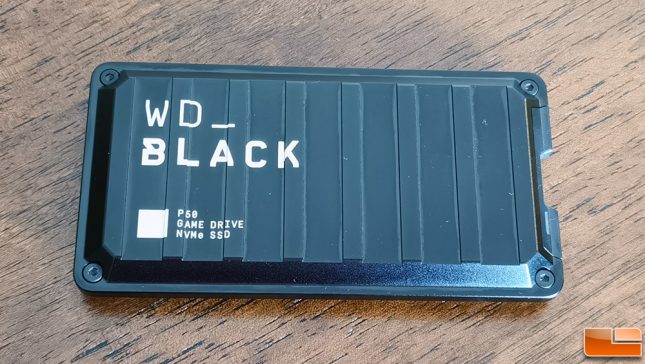 The WD_Black P50 Game Drive NVMe SSD enclosure is all black and clearly aimed at gamers. The design looks good, but the raised edges do catch dust as you can see in the image above. The drive measures 4.65″ x 2.44″ x 0.55″ and inside you’ll find the WD Black SN750 NVMe SSD with optimized firmware on it. 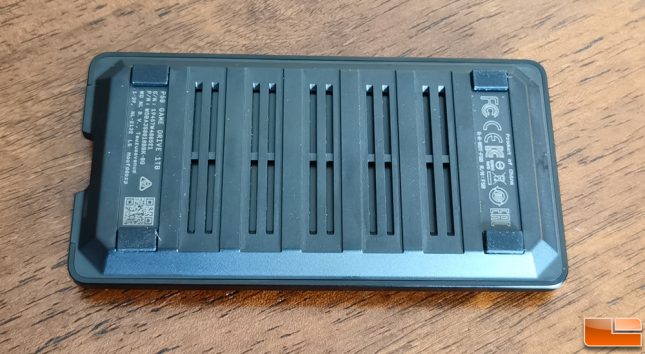 On the bottom the drive has four small rubber feet that keep it raised up a touch to ensure exhaust openings on the bottom remain unblocked. 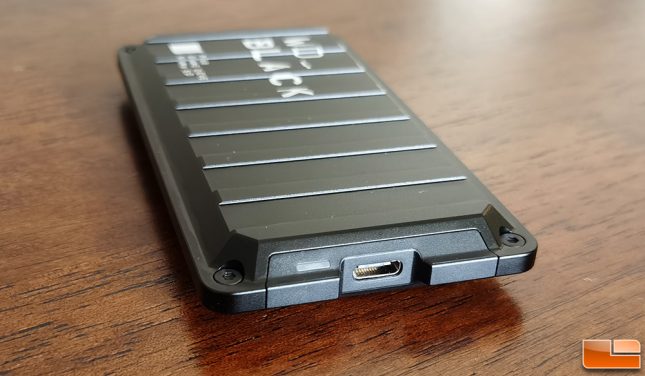 On the end of the WD_Black P50 game drive you’ll find the single USB Type-C port and the white LED power/activity light. 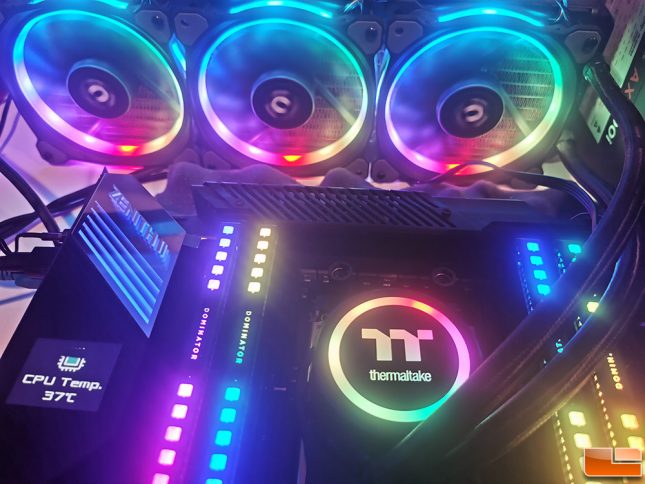 To try out the WD Black P50 Game Drive we turned to our AMD sTRX4 test system that is running an AMD Threadripper 3970X 32-core, 64-thread processor ($1,853 shipped) on the ASUS ROG Zenith II Extreme motherboard ($849 shipped). Yes, this is a ridiculously expensive system that is nearing $5,000 by the time you add in all the other hardware! We understand the market for a product like this is very small, so lets get straight to the numbers. 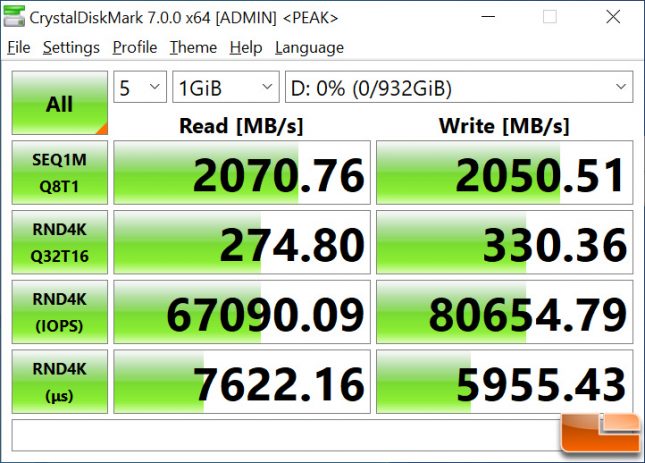 The WD Black P50 1TB Game Drive topped out at 2070 MB/s read and 2050 MB/s write on the sequential test! This is the highest score that we have ever seen on a portable SSD from any drive maker. 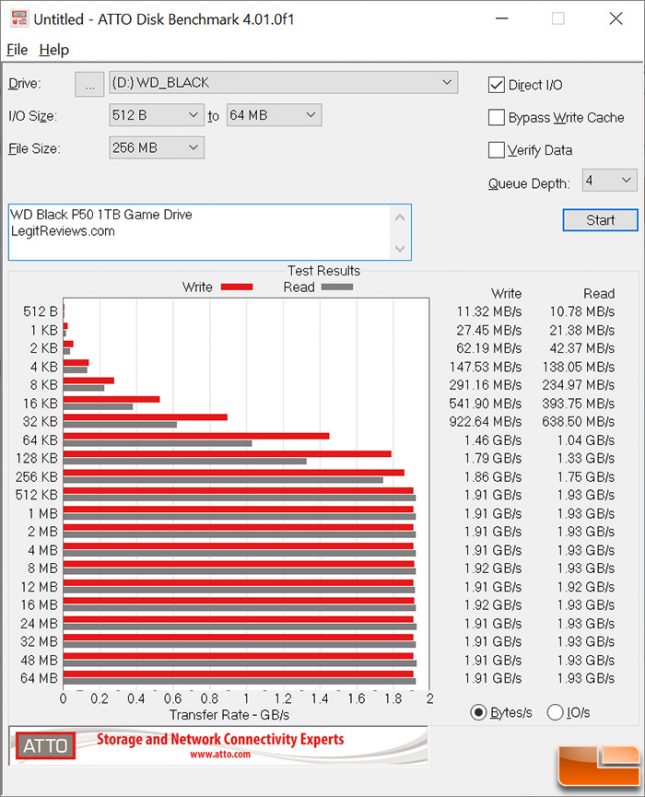 Next we ran ATTO Disk Benchmark and again the WD Black P50 came in with some ridiculously fast transfer speeds of 1.93 GB/s read and 1.92 GB/s write!

The drive started to feel a little warm after running ATTO and CrystalDiskMark, so we opened up CrystalDiskInfo and noted that it was running 51C or about 124F according to the internal temperature sensor. The enclosure gets warm when this drive is plugged in and being used, but the surface temperature won’t burn you. 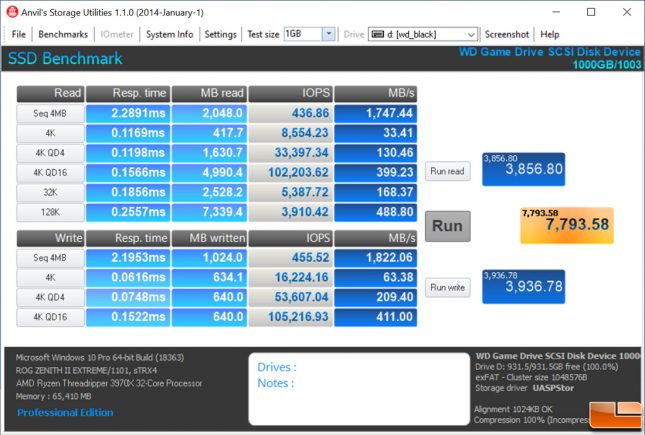 Anvil’s Storage Utilities showed the P50 1TB Game Drive scored nearly 7,800 points on the standard SSD benchmark test! That is faster that many internal SSDs that are used in client computing. 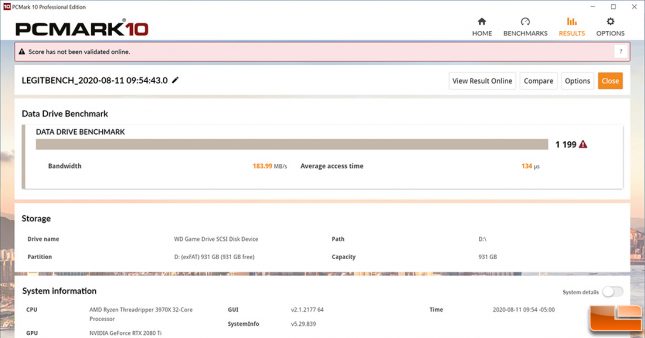 Running the Data Drive Benchmark in PCMark 10 showed an overall score of 1,199 points with a bandwidth of 183.99 MB/s and an average access time of 134 microseconds. This score seems ‘off’ to us, so we manually transferred over Call of Duty: Warzone from our primary NVMe SSD to the P50 Game Drive. The transfer never got over 1GB/s and ended up failing on the USB 3.2 Gen 2×2 interface. It would work fine over any other USB port, but not the USB 3.2 Gen 2×2 interface that uses an ASMedia controller. 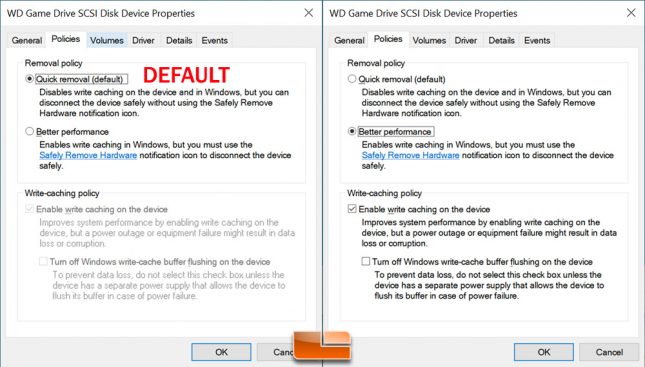 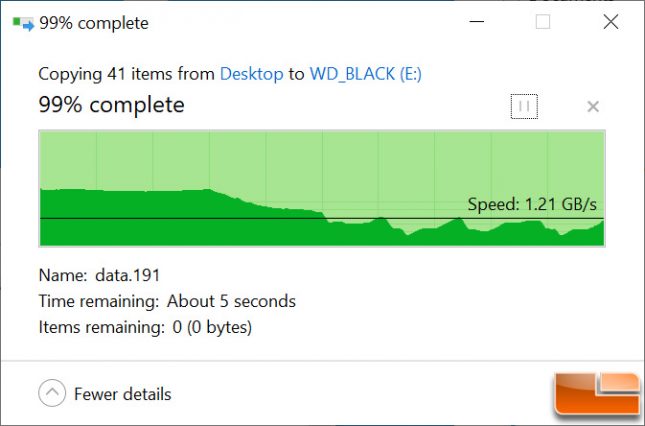 We used just 40GB of data files from the Call of Duty: Warzone game directory and moved them over to the P50 Game Drive with write caching enabled on the drive and it completed this time! Speeds ranged anywhere from 800 MB/s to 2000 MB/s for the file transfer. We re-ran PCMark 10 to see if the scores would improve, but they actually dropped just slightly. 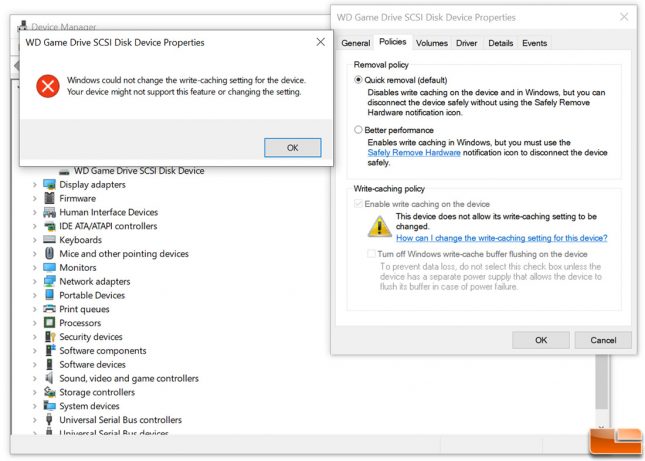 When we went to change the setting back to the default setting we were greeted with an error message saying that Windows 10 could not change the write-caching setting for the P50. Ugh!

So, at the end of the day the WD_Black P50 Game Drive has simply incredible performance numbers when using most canned benchmarks on the USB 3.2 Gen 2×2 port. The only problem is that we were unable to have a folder copied to it straight out of the box! This is unacceptable and to think that this is on a drive that came out in November 2019. Other review sites like Hardware Canucks (review) and Computer Base (review) both ran into issues and reported on them. Most of the other reviews that have been published were not completed on the USB 3.2 Gen 2×2 interface and didn’t run into the issue.

For now the WD_Black P50 Game Drive isn’t something we’d recommend to our readers. You will not have a good user experience with it on a USB 3.2 Gen 2×2 port (20Gbps). It works fine on USB 3.2 Gen 2 ports (10Gbps), but you loose half of the drives rated performance. Why pay a premium for something that you’ll never likely be able to hit in the real world?

This issue hasn’t been fixed in over half a year and who knows how well the ‘fix’ could be via firmware. Legit Reviews reached out to WD before this article was published and let them know that we ran into issues. The PR team believed newer firmware was available, but was unable to immediately available to send it over. We’ll report back if and when we get the firmware!

UPDATE 8/14/2020: Legit Reviews has spoken with Western Digital and ASUS about the issues that we encountered and have discovered this is a fairly complicated issue. There is a firmware ‘fix’ available, but that fix basically forces the drive to run at 10 Gbps rather than crashing entirely on certain file transfers. After discovering this issue it is our understanding that ASMedia created a new revision controller for the bridge chip that is used on both the motherboard and the WD_Black P50 Game Drive. Our motherboard and portable SSD are from the initial production runs and use controller revisions that are impacted by the issue. So, to achieve true 20Gbps speeds across the entire file transfer we are needing to replace both the ASUS ROG Zenith II Extreme motherboard and the WD_Black P50 Game Drive with new models that were produced after June/July 2020. Since this is something that is on the bridge chip, it impacts all manufacturers that used the ASMedia controller in question. Legit Reviews has asked to return both products for newer revisions and will update this article when and if those arrive. WD said they’d happily replace our P50 Game Drive, but due to the global pandemic they are not sure when they can.