The WD_BLACK D50 Game Dock might not be a product that you’ve heard about, but it might be something that will make your life much easier. This device is mainly targeted at laptop gamers or content creators that are looking for improved connectivity. If your system happens to have a Thunderbolt 3 port then adding the WD_BLACK D50 Game Dock to your setup will certainly make your life easier and give you flexibility that you did not have before.

Connecting the D50 to your system is simple. You plug the power adapter into the wall and then connect the supplied Thunderbolt 3 cable to the PC. Once this is done you have added the following ports to your system:

This is a big improvement as many new thin & light laptops only usually have a handful of ports and connecting wired peripherals such as a mouse, keyboard, headset, a display can be challenging. The WD_BLACK D50 Game Dock also comes with ethernet and 3.5mm audio ports, which might be needed for some gamers. The Thunderbolt 3 connection that goes to your laptop delivers up to 87W of pass-through charging so it can charge most laptops while in use. This means you’ll likely be able to ditch the original power cord and brick and use the 120 power brick that comes with the D50. 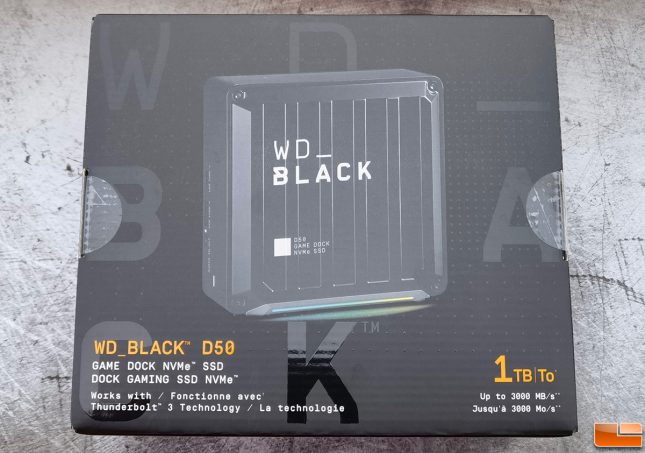 Western Digital sent over the WD_Black D50 Game Dock with a 1TB NVMe SSD inside. The D50 Game Dock is available with and without an internal storage drive. If you are looking for expanded storage capabilities the models that come with with an ultra-fast NVMe SSD may be appealing. They offer read/write speeds up to 3000/2500MB/s! 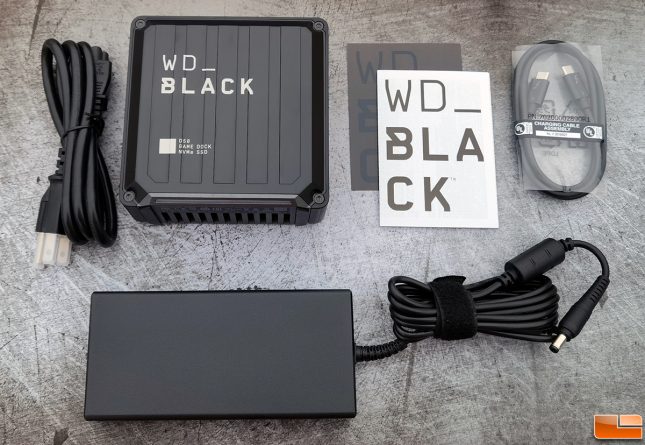 Inside the box you get the D50 Game Dock, Thunderbolt 3 cable, 180W power brick and a quick install guide. The power brick is made by Delta Electronics and is model number ADP-180TB F. This is a fairly common laptop power supply and runs $54.99 by itself over on Amazon.

Show Me Those Connectors!

Laptop gaming can be challenging for those that want to hook up their own gaming peripherals. Have you ever tried connecting your own keyboard & mouse, headset, broadcast microphone, webcam, external storage drive and larger display to a laptop? It can be a challenge and a severe pain in the butt.

Across the top of the back part of the dock you have the power connector, 1GbE Ethernet port, two more USB-A ports. Below that is the USB-C connector that delivers up to 87W of power to the PC, Thunderbolt 3, Displayport 1.4 and a USB-C port. Off to the right side is an active cooling fan that ensures all of the internal components are nice and cool. 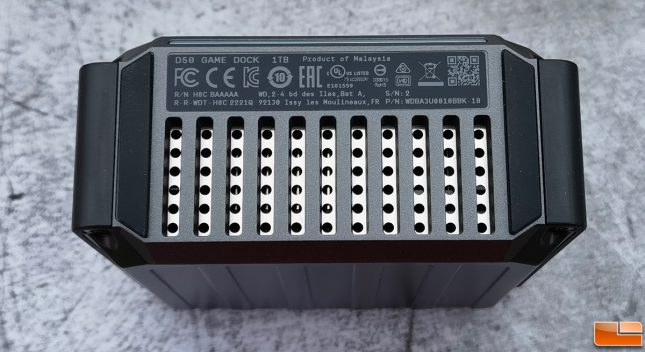 The only ventilation holes are located on the bottom of the D50 Game Dock, so make sure you don’t block these holes somehow! There are two rubber pads on the bottom that help keep the unit from moving around on a hard surface.

Can I Change the NVMe Drive Out For Another?

Sure, anything is possible if you have the time and resources to do so. Western Digital does not suggest opening up the D50 Game Dock to tinker with the M.2 drive inside. They provide no documentation on how to open up the dock let alone how to change a drive out! 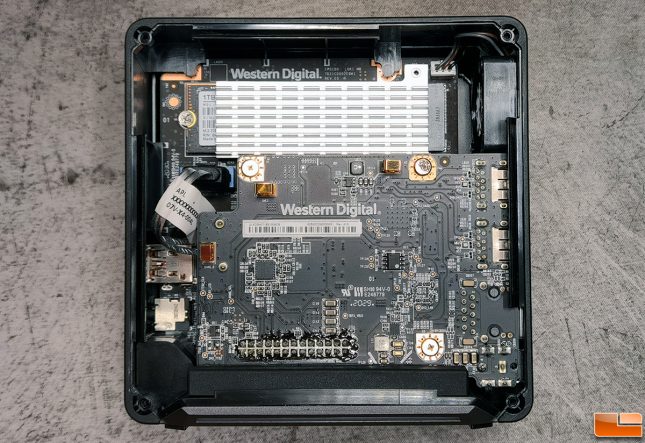 We like to take things apart and found things were not too tough. You need to remove four 1.5mm Allen hex key screws on the front cover. You then need to pry off the front cover from the four pieces of adhesive that also hold it down. From there you have direct access to the M.2 2280 slot. Take note that Western Digital is using an aluminum heatsink on the NVMe SSD. We aren’t sure if this comes with the diskless models or not! The cooling fan is directly across from the NVMe SSD and should get the air flowing across the heatsink.

Like many other gaming products on the market today, the WD_Black D50 Game Dock has customizable RGB lighting. To control the lighting you’ll need to download the WD_Black dashboard app. Once you have that installed you are commander of 13 different LED lighting effects. You can also use 3rd party RGB lighting software with the D50 Game Dock. 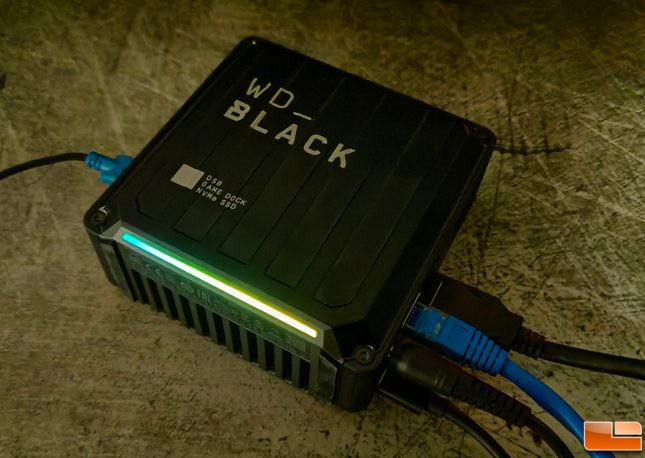 The RGB light strip is only on one side of the drive and is not overpowering. 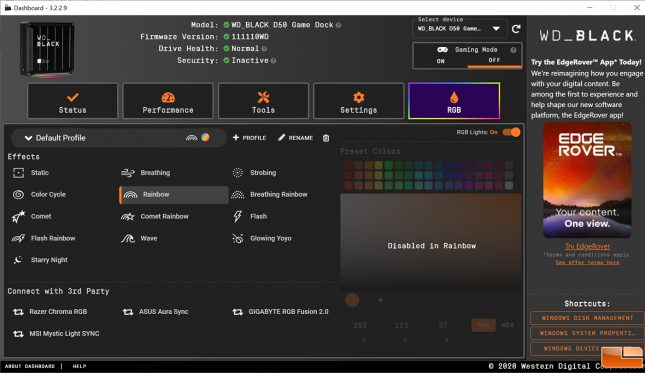 The dashboard also allows you to monitor drive health, optimize performance and enable game mode. Ironically, despite being targeted at gamers the D50 comes with game mode disabled by default. This mode will need to be turned on manually and forces the drive to an always on power state. 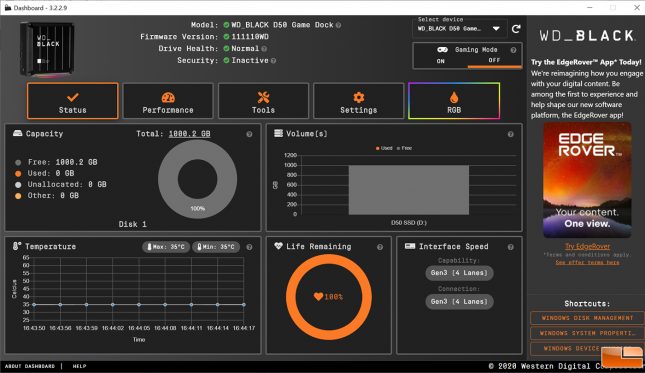 We checked out performance on our Dell XPS 13 9310 laptop with the 11th Gen Intel Core i7-1165G7 processor on the Thunderbolt 4 port. Once you plug in the WD_BLACK D50 Game Dock the internal NVMe SSD is automatically detected and assigned a drive letter. We ran a couple popular industry benchmarks to show you how the performance looks. 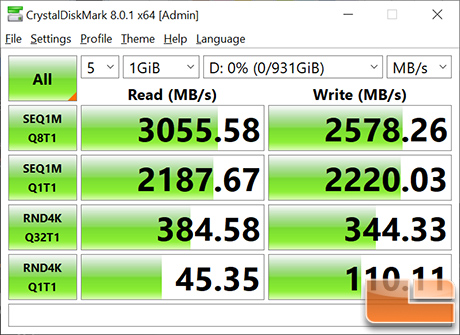 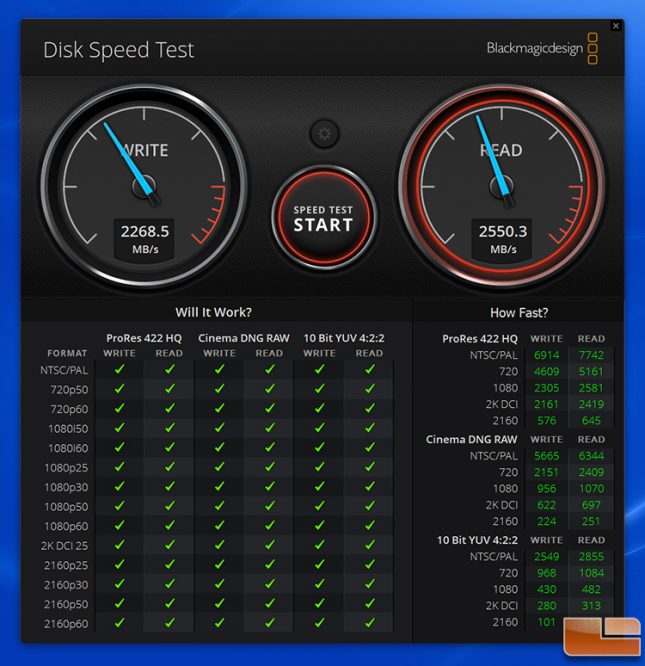 Our next performance test was Disk Speed Test by Blackmagicdesign! Here we got 2.6 GB/s read and 2.3 GB/s write speeds! These are some of the highest scores that we have ever seen on an external drive and we got passing marks in everything. Storage performance will decrease if you are actively using other connections, so this is a best case scenario!

What About Fan Noise and Temperatures?

The fan never came on during testing despite moving some pretty large files around! We moved a 64GB file to the D50 Game Dock and temperatures reached 77C. One would think this would be warm enough for the fan to kick on, but it is not. There is also no way to control the fan in the WD Dashboard app. The nice thing about this is that there is no fan noise to worry about. The thermal throttling temperature of the D50 Game Dock is 85C.

At the end of the day the WD_BLACK D50 Game Dock is a simple way to add connectivity to platforms that you wish had more options. Being able to plug in one Thunderbolt 3 cable and to have everything just work right on Windows 10 is pretty impressive. There were no drivers to mess with and the setup experience went so smooth that we were concerned!

Plugging in a DisplayPort connection to a secondary monitor instantly duplicates the display without even needing to press a button. When using the DisplayPort and Thunderbolt 3 connectors on the WD_BLACK D50 Game Dock, a dual-display configuration is supported at up to 4K 60Hz. A larger display is something many laptop users crave and this solves that issue. Laptop charging support is icing on the cake as Seagate’s Gaming Dock lacks that feature. The added connectivity and ease of use is most impressive.

The storage performance of the 1TB drive in our D50 Game Dock was awe inspiring. We saw sequential speeds top out at over 3.0 GB/s read and 2.5 GB/s write. This exceeds the drives rated speeds and is great news for content creators and gamers that are looking to quickly move files and games around. We got those numbers at a queue depth of 8, but low queue depth performance at QD1 was solid with speeds of around 2.2 GB/s on both read and write operations.

All WD_BLACK D50 Game Docks are backed by a 5-year warranty and are available to purchase now.

They are by no means inexpensive, but are a pretty slick all-in-one connectivity problem solver! Those that want to get into streaming and game on a laptop will consider the WD_Black D50 Game Dock a life saver.