How does the WD PiDrive Perform.

For my testing I decided to see how well the performance was with just a SanDisk Ultra XC1 64GB Micro SD card as the boot drive and as storage a Sandisk Ultra 128GB USB3.0 flash drive, WD Labs 314GB PiDrive, and a Western Digital 320GB My Passport USB3.0 external.

With Ubuntu MATE installed and updated I installed the Gnome Disk utility and ran the benchmark tool with the default settings on all the drives. 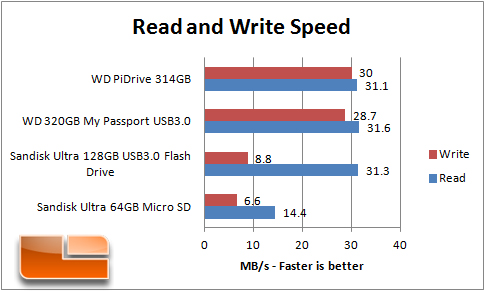 Even though all the drives are quiet fast forms of storage, the PiDrive and the 320GB WD My Passport drive did way better on the write tests, almost 5 times as fast as the Micro SD card.

In using the Micro SD card and WD PiDrive as the boot drive I then tested the boot and shutdown times. The speed difference between the two most noticeable on start up and shut down. On start up you have to wait for the platters in the PiDrive to spin up, on shut down you have to wait for the slow write speed of the Micro SD card to finish all the writes back to the disk on shutdown. The use of BerryBoot only slowed the boot time down for as long as it takes for you to click the boot button, if you wait for the BerryBoot to time out then your boot time can be 40 seconds to the login screen.

Power draw was a little harder to test. Im not an Electrical Engineer so I dont have access to the neat stuff like power monitors that can read in the milliamp range, So need to do a little math. The Raspberry Pi is designed such that I can provide 100mA to each of the USB ports, so 400mA total to the USB. Raspberrypi.org says you can power a single 500mA device, but it is not recommended as it would cause stability issues. Math time! Go with the high side of 500mA and take out 100 for cheap mouse/keyboard and the LAN, leave us with 400mA. So 400mA x 5V/1000 = 2W, yup thats whopping 2 watts of power.

I hooked the Raspberry Pi up to my Kil-A-Watt meter to see what the system draws. With just the Pis power supply, Raspberry Pi 3, wired keyboard and mouse the power draw at the wall was 4 watts at boot up, 3 watts for file transfer from network, and setting idle at the desktop. Adding in the WD PiDrive as the boot drive it bumped the start up draw to 6 watts. Thats pushing the 2 watt buffer we have. Same for the PiDrive and Flash drive combo. Using the 320GB My Passport drive however, not only did the boot power draw go up, but also the file transfer and the idle power went up 1 watt as well. So the power tweaking that Western Digital did to the PiDrive is noticeable. When I tried to use the PiDrive and the Passport drive in at the same time, the system did not like that one bit. It actually corrupted some boot files when it locked up as soon as I added the second drive in. I then removed the keyboard and mouse, and tried the PiDrive and 320GB My Passport drive, the system would mount the drives but as soon as I tried to transfer files the system would lock. So, if you want to run more than one hard drive you will need a powered hub or the WD PiDrive Cable.