\Western Digital today introduced a number of WD Black external storage solutions for PC and console gamers at Gamescom 2019 in Germany. The five new storage solutions are aimed at gamers since it allows them to increase the number of games stored locally, improves game portability as well as  accessibility. These five new drives join the WD_Black SN750 M.2 PCIe NVMe SSD that we reviewed earlier this year.

“We constantly hear from gamers about how the performance and capacity limitations of their current systems challenge the quality of their gaming experiences,” said Susan Park, vice  president of product management for content solutions at WD. “We are helping make room for the latest releases, whether a gamer has been playing for years or is just starting out and looking for a high-performance edge. With the latest additions to our WD Black portfolio, anyone from the casual to hardcore gamer can now capture a variety of games in one accessible place.” 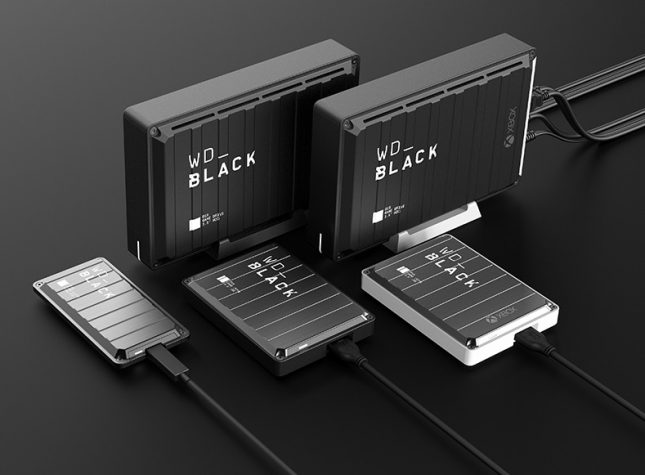 The WD_Black P10 Game Drive for Xbox One is basically the same enclosure formatted for use on the Microsoft Box One. Only this time it comes in a 3TB model for $110 or a 5TB model for $150. It also comes with a two month free subscription to Microsoft’s Xbox Game Pass Ultimate — a $30 value. Both of these drives are rated as having up to 130 MB/s transfer speeds with  USB 3.2 Gen1 connectivity.

Next up we have the WD_Black D10 Game Drive that houses a larger 3.5-inch 8TB hard drive for $199.99. This enclosure is aimed at series gamers as it can hold up to 200 games and has active cooling to keep the 7200 RPM drive nice and cool. Transfer speeds on this game drive is rated at up to 250 MB/s and those speeds are achievable with the drive sitting vertically or horizontally. This model also comes with two 7.5 Watt charging ports, so you can charge your phone or gaming accessories.

The WD_Black D10 Game Drive for Xbox One is available in a 12TB capacity is priced at $299.95 and can hold up to 300 games in your Xbox One gaming collection. It also comes with a 3-month membership of Xbox Game Pass Ultimate. It too can reach speeds of up to 250 MB/s and have two USB charging ports.

Lastly there is the WD_Black P50 Game Drive, which comes out in Q4 2019 in capacities of 500GB, 1TB or 2TB. From out understanding this small enclosure houses none other than the WD_Black SN750 M.2 NVMe SSD. With that drive paired with the USB 3.2 connector, WD is seeing speeds of up to 2000 MB/s on this drive.

These drives solve a common problem that plagues most gamers, so we see them doing really well in the market. WD has some slick looking enclosures at respectable capacities that don’t force you to pick or choose which games you want to keep or delete on your console or PC in order to make room for new ones. What doesn’t sound good about that?