Watch Dogs Legion came out at the end of October as the third installment in the open-world action-adventure game series by Ubisoft. The game has a built-in benchmark that we wanted to try out, but we wanted to wait for the first wave of patches to hit before we tested a big stack of desktop gaming graphics cards. Spending a day or two running benchmarks on a dozen different graphics cards at all sorts of resolutions only to have them invalidated before they are published is rough.

Well, we are glad we waited as Ubisoft deployed a launch day patch for PC users that delivered performance improvements. They also have rolled out more patches since then. Now that the game has been out now for nearly two weeks we thought that’d we’d do some benchmarking with the hopes that the results are still valid by the time we get everything ready to be published. 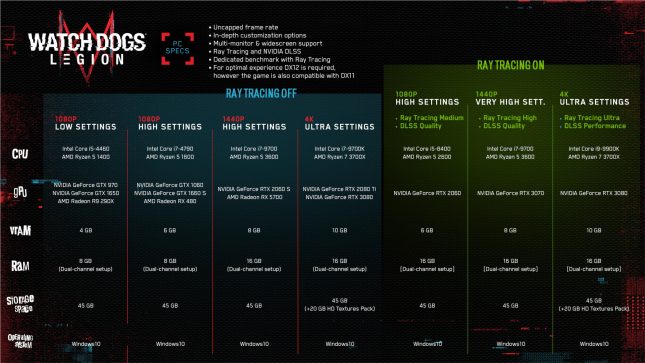 Ubisoft released recommended PC specs for Watch Dogs: Legion and it is pretty detailed. They cover 1080p low, 1080p high, 1440p high, and 4K ultra settings. The game maker also now has a separate category for those with NVIDIA GeForce RTX graphics cards that highlights what you can expect with Ray Tracing and DLSS enabled.

For our testing we are going to look at 1080p, 1440p and 4k with very high settings on 12 difference graphics cards from both NVIDIA and AMD. We also took a look at Ray Tracing enabled with the quality set to high. DLSS was not enabled as we plan on using these numbers later this month when the AMD Radeon RX 6800 XT and Radeon RX 6800 graphics cards come to market. 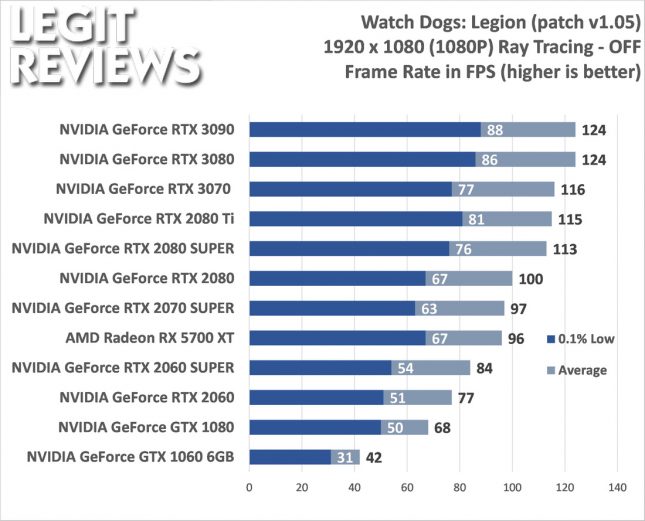 For the 1080P gamers out there we have pretty good news. Most all recent desktop graphics cards are able to run this title with ‘Very High’ image quality settings at acceptable frame rates. The NVIDIA GeForce GTX 1080 Founders Edition card averaged 68 FPS and the 0.1% low was only 50 FPS. Not bad for a card that was released in 2016. The new GeForce RTX 30 series cards nearly double this average frame rate though, so there is a pretty big jump up in performance on cards from yesteryear versus the new models. The AMD Radeon RX 5700 XT is the sole AMD card that we tested and it came in with an average frame rate of 96 FPS, which was only 1FPS behind the NVIDIA GeForce RTX 2070 SUPER. It looks like we are hitting a bit of a CPU bottleneck at this resolution on the GeForce RTX 3080 and 3090 models. 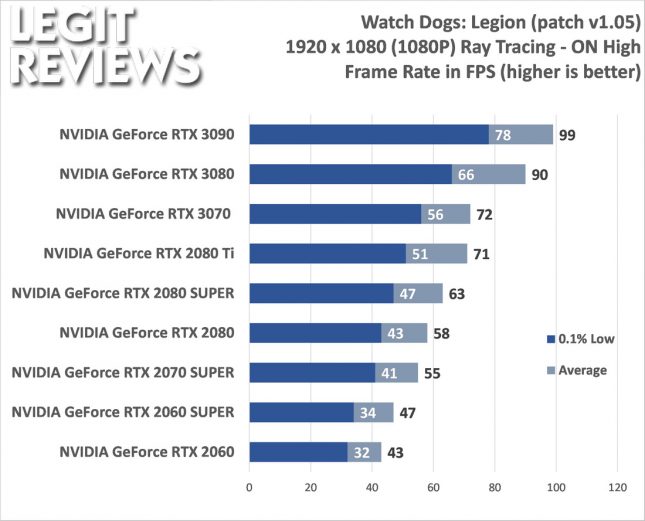 When we enabled ‘High’ Ray Tracing features we found the performance took a pretty big performance hit. Cards like the NVIDIA GeForce RTX 2080 went from averaging 100 FPS down to 58 FPS on average with this feature enabled. So, you are taking a good sized performance hit by enabling Ray Tracing. We only tested this feature on cards that have dedicated Ray Tracing cores for those that are curious why some models went missing in this chart. 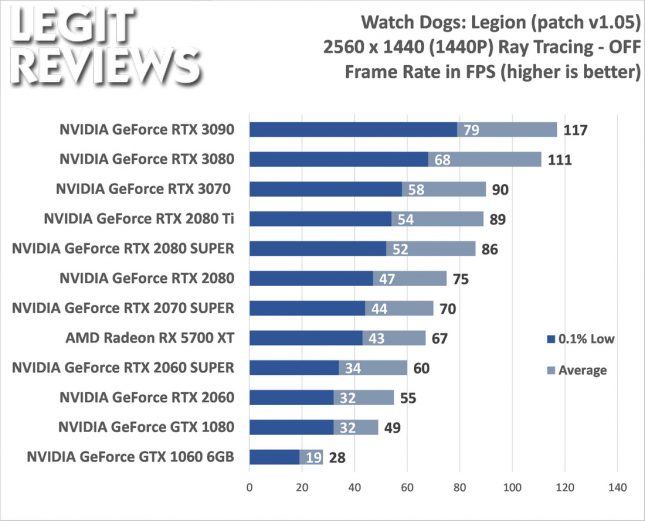 Moving up to a 1440P display we can see that the larger screen resolution punishes the hardware a bit and now three of the twelve cards have an average frame rate under 60 FPS. When it comes to 0.1% lows all the cards with the exception of the GeForce RTX 3080 and GeForce RTX 3090 now fall below 60 FPS mark. 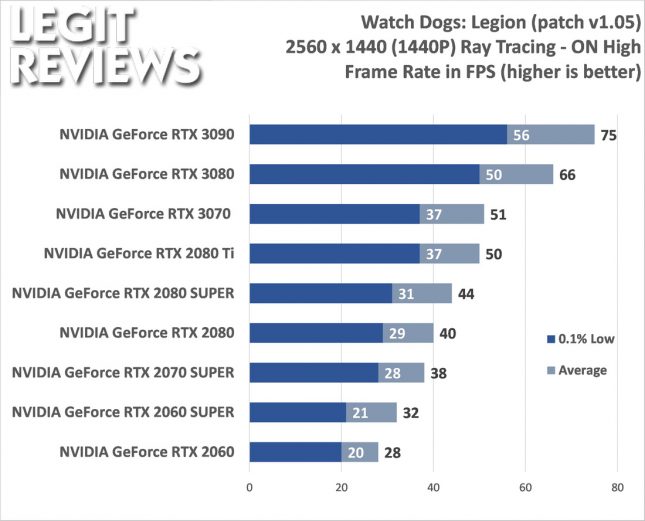 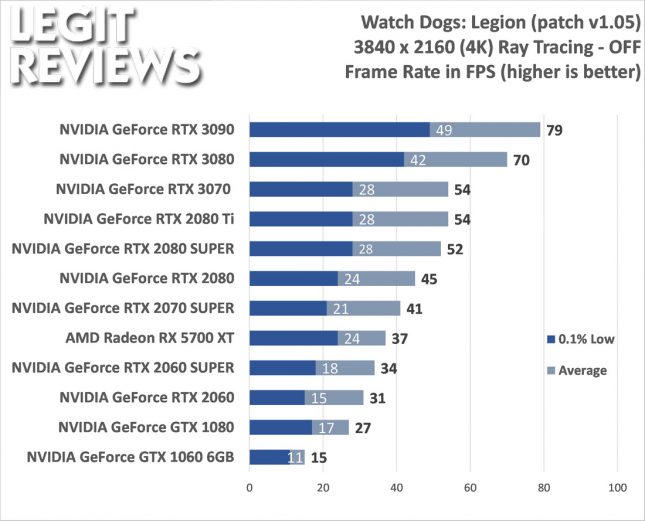 If you plan on doing 4K gaming the NVIDIA GeForce RTX 3080 and GeForce RTX 3090 cards were able to average well above 60 FPS and are the only two of the twelve cards that can deliver this kind of performance. The NVIDIA GeForce GTX 1060 6GB card struggled to run Watch Dogs: Legion at 1440P and got crushed here with an average frame rate of just 15 FPS. 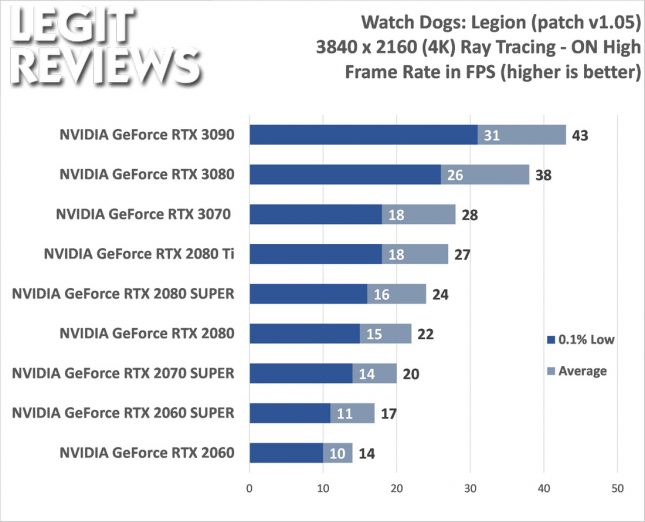 Turning on Ray Tracing and setting to high left no cards being capable of averaging 60 FPS. The mighty NVIDIA GeForce RTX 3090 Founders Edition card averaged 43 FPS with a minimum frame rate of 31.

Watch Dogs: Legion is a very demanding game title that demands some serious hardware to have really smooth gameplay. The NVIDIA GeForce GTX 1080 averaged 68 FPS with the very high image quality setting and no ray tracing. A few years back this card was the end all for 1080P gaming and here we are seeing it come in just above the beloved 60 FPS threshold without cranking the image quality up to the max. All three cards that currently make up the GeForce RTX 30 series all average above 60 FPS at 1080P and 1440P and two of them best that at 4K.  That said, the AMD Radeon RX 5700 XT was above 60 FPS at 1080P and 1440P and the new Radeon RX 6800 XT and RX 6800 cards that come out this month should easily top that. Things are going to get really interesting here soon between AMD and NVIDIA.

Overall the Dunia engine used by the game seems to be doing pretty well considering this is the first game title to get DirectX 12 support with Dunia. This game title was delayed to ensure a smooth launch as they needed to add DirectX 12, ray tracing and DLSS support from the get go.