Using ATI and NVIDIA Video Cards To Make A Sauna

Call it what you will, but recently it seems I’ve lost several pounds for no reason at all.  I couldn’t figure out why I lost weight as I’ve been spending most of my days and nights benchmarking DirectX 10 video games like Lost Planet and Call of Juarez.  Trust me, I wasn’t upset that I lost a few pounds, but it seemed a bit strange.  This afternoon, I was sitting in my office doing e-mails, when I noticed that my room was a bit warm.  Actually my office/spare bedroom was hotter than any other room in my house.  Then it struck me — I recently upgraded my personal system to an XFX GeForce 8800 GTX. Could it be cause by the video card?  Nah, with all the talk about global warming and rising temperatures it must be that.  Okay, it’s not global warming (Sorry, Al Gore, I tired my best), but rather that pesky video card happily spinning away and putting out heat.

Maybe it’s a stretch linking to to my weight loss, but it’s kind of fun to think about.  Sitting in a sauna will cause one to lose water weight that they sweat out.  Since the room temperature increased due to the video card, I can conclude that I am losing weight by playing games!  Okay, that’s stretching it a bit isn’t it.  If you like that one try this one on for size.  Ice cream sales increase in summer.  The crime rate in America also increases in summer.  Therefore we can conclude that ice cream causes crime.  You can come up with a million of these brain teasers, so I’ll call it quits on that one.  In all seriousness, when using newer video cards like the GeForce 8800 GTX and the Radeon HD 2900 XT, the temperature of the room was higher than when using say a GeForce 7900 GTX for example. 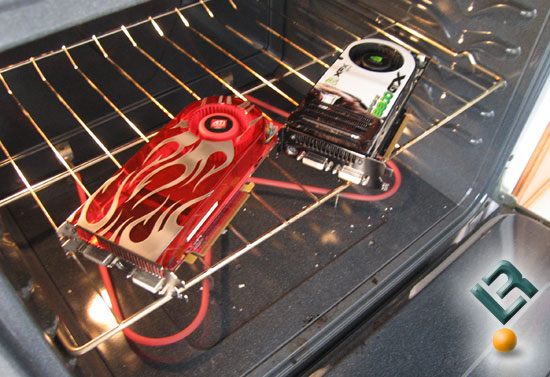 Just for fun I thought I’d put together a quick and easy test to see how the Radeon HD 2900 XT and GeForce 8800 GTX do when it comes to heat output. I’m not talking about the GPU temperature that can be found via software, but rather the heat that is produced by the surface of the card and the air that is blown out of the video card. Without expensive thermal cameras and test rooms I had to settle for a ghetto air temperature test by using my trusty infrared digital laser pyrometer to find out the temperature. This specific model has a temperature range between 0-500 degrees F with an accuracy range of plus or minus 3 percent, and includes a laser pointer to make sure you know what you’re taking the temperature of.  If you look closely at the following pictures you can see the red laser dot on the surface. 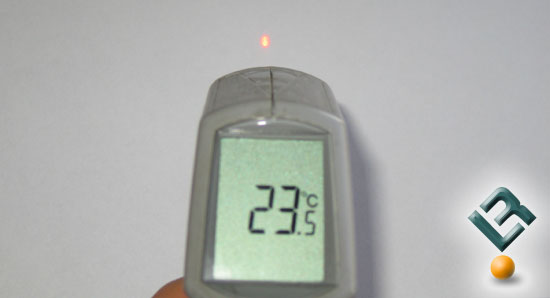 To start things off, I took a plain sheet of white printer paper and found the surface temperature of the paper and room in general to be 23.5 Celsius. Let’s now place the piece of paper in front of the exhaust fan on an XFX GeForce 8800 GTX, BFG Technologies GeForce 8800 GTS OC 640MB and the just released ATI Radeon HD 2900 XT to see how each high end card does. Just for fun we will also record the temperature directly behind the core on each card.