Using an Xbox 360 HD DVD Player on a desktop PC

I’ve had a high definition (HD) television for some time now, although just recently I have come out of the stone ages and shelled out the extra money to have HD cable service.  I once thought that watching a regular DVD at 480p looked sharp as can be, but now that I have 1080i HDTV it has left me wanting better quality for my DVD’s.  I’m not alone it seems as HD content is gaining in popularity thanks to increasing availability and affordability of HD-capable television sets and movies on HD media.  I was left looking for something to replace my aging DVD player that tops out at 480p as I wanted HD for my movies.  With the Blu-ray and HD DVD format battle still raging I found myself looking at the Microsoft XBOX 360 HD DVD player as it should hold its retail value down the road should I ever choose to go Blu-ray as there are plenty of Xbox 360 owners in the world.  The retail box that Xbox 360 HD DVD player comes in clearly states that a Microsoft Xbox 360 is required, but that isn’t true as you are about to find out. 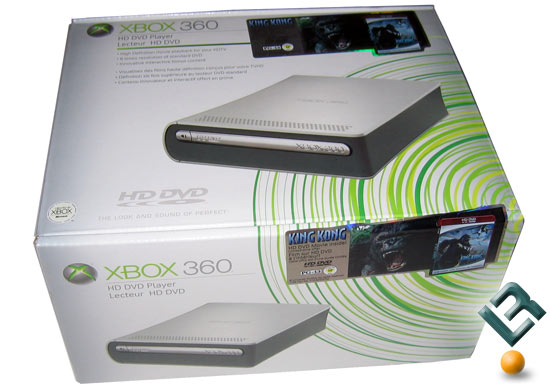 After getting the Xbox 360 HD DVD player from Best Buy we were set and ready to go.  This particular HD DVD player is an external model that can be placed flat or standing up, which means it will fit in the entertainment center next to the HTPC and other audio equipment. It also comes with the HD DVD title King Kong, which means we will have something to watch once we get the system ready to use.

Many older computer systems will struggle to play smooth HD content playback as both Blu-ray and HD DVD media require up to six times the rendering required over standard-definition content and are memory bandwidth intensive. Digital rights management (DRM) technologies also create issues on older systems as High-bandwidth Digital Content Protection (HDCP) support is needed on both the PC and the monitor in order for Blu-ray and HD DVD media to play in HD.  This means that to play HDCP content you must have HDCP ready components, including, but not limited to, an HDCP ready monitor, disk drive, multimedia application and computer operating system.  If you don’t pass these qualifications the copy-protected DVDs restrict playback to 480i and 480p modes, so make sure you have all the right components. HDCP is a form of Digital Rights Management (DRM) developed by Intel Corporation to control digital audio and video content as it travels across Digital Visual Interface (DVI) or High-Definition Multimedia Interface (HDMI) connections (so thank Intel for this one). 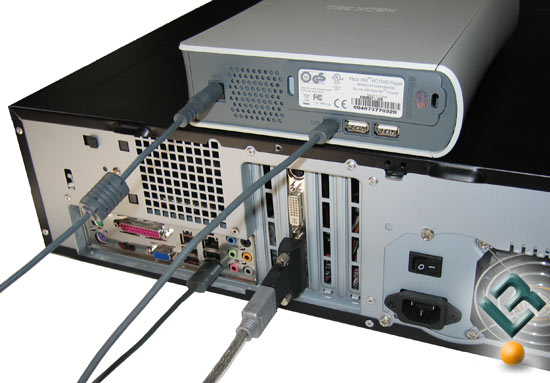 My home theater personal computer (HTPC) has Microsoft Windows Vista Ultimate installed along with an ATI Radeon HD 2600 XT series video card, which makes setting everything up a breeze. The Xbox 360 HD DVD player was connected to the HTPC via the supplied USB cable and plugged into a power source.  After connecting the HD DVD player to the computer with nothing more than the USB cable we can now worry about getting the HD content from the computer to the television. 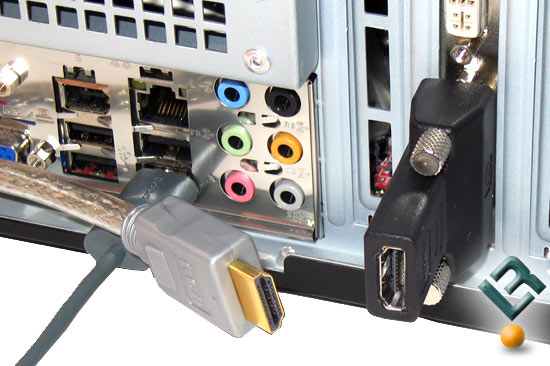 To be compliant with the Windows Vista Premium logo requirements, a system with enabled HDMI outputs must include two distinct audio source – one main system source and one for HDMI output. All ATI Radeon HD 2000 series cards have an HD-audio controller on the ASIC, which creates a protected audio path separate from the system’s main audio source.  To use this source, one must use the ATI Radeon DVI-to-HDMI adapter to get full HD video and audio support. This adapter means that these cards can support Dolby Digital and DTS (AC3) enabling six channel (5.1) audio when connected to an HDMI receiver.  This also makes installation simple as just one cable is needed for both the video and audio feeds, which makes for less clutter than component cables that many of us are used to running.  We picked up an  RCA six foot HDMI to HDMI cable from the local Wal-Mart and had the system setup for full HD support.