Toshiba has some great looking notebooks in the Qosmio series, both in terms of the internal hardware and the overall look of the notebook. The Toshiba Qosmio x305 notebook will be released in mid-July and is already making ripples in the industry ever since it was announced and posted on the Toshiba website. The graphics on the Qismio x305 will be powered by the yet to be announced NVIDIAGeForce 9800M GTX graphics card, which has 1GB of video memory. For those that still want to game, but save some hard earned dollars we overheard that consumers can customize the notebook with the less expensive GeForce 9700M GT graphics card rather than the GeForce 9800M GTX. NVIDIA hasn’t said much about this un-released graphics card, but they did have the Toshiba Qosmio x305 notebook on display at a Microsoft Corporation event this week called the Games for Windows Presents: The Big Picture. 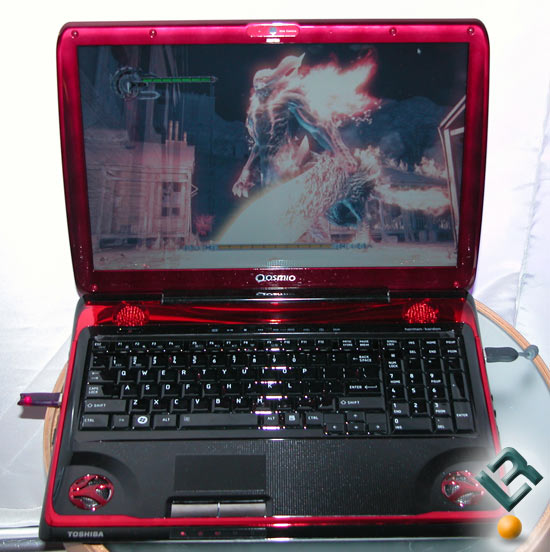 The Toshiba Qosmio x305 notebook was spotted doing what it does best, playing games on the Windows operating system.  What else would you expect from a Microsoft event? Notice the four sweet looking Harman Kardon stereo speakers located at each corner around the keyboard. The features of the notebook are impressive as you can see from the list below. 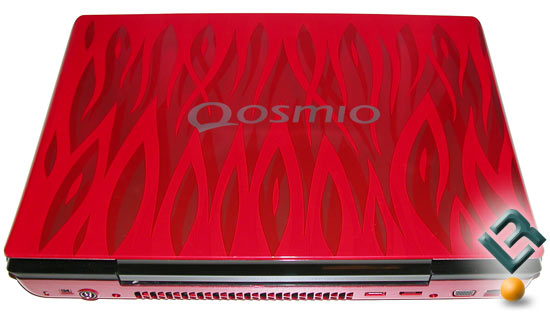 The red flame finish on the Qosmio x305 is slick looking to say the least as you can see for yourself in the picture above. Toshiba hopes that gamers will flock to the notebook as it is based on a newer platform than competitors like Dell with the M1730 gaming notebook. With new features like DDR3 memory and the latest and greatest chipsets, video cards and processors they just might pull it off! 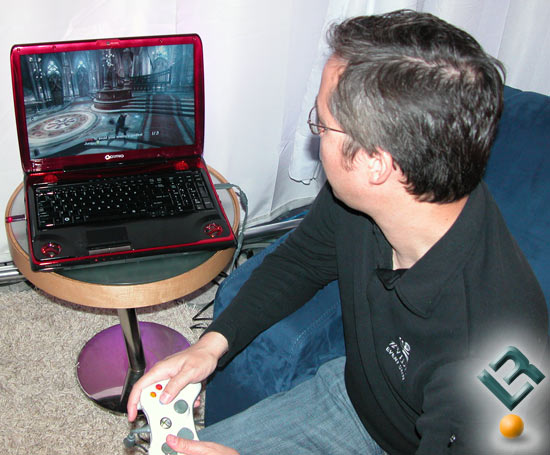 Here we have a picture of NVIDIA’s notebook master Rick Allen (PR Manager, Notebooks and Multimedia) showing off his skills on the unreleased PC game Devil May Cry 4 by Capcom (Check out the PC Demo here). Devil May Cry 4 will have both DirectX 9 and DirectX 10 modes, and will also be compliant with the Games For Windows program. NVIDIA had the game running in DirectX 10 mode on the Qosmio x305 at the event. 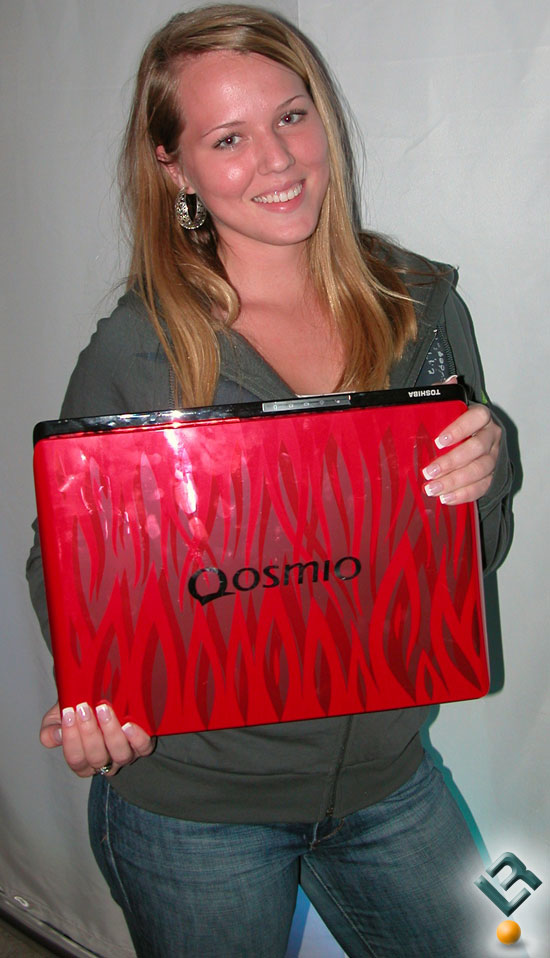 To conclude this exclusive look at the Toshiba Qosimo x305 notebook we give you Cyntiha (NVIDIA PR Coordinator) and the Toshiba Qosimo x305. Now that is what we call a sexy looking notebook! It looks like Toshiba will be the talk of gamers this summer with the Qosimo x305 sure to turn some heads! The combination of Intel Core 2 Extreme processors along with NVIDIA GeForce 9800M GTX graphics is sure to create some buzz.  The Toshiba Qosimo x305 is set for release on July 14th, 2008 with prices starting at around $3500 USD.