Thermaltake introduced the TOUGHAIR CPU Air Cooler series at CES 2021 that is targeted for high-performance PC builds. The TOUGHAIR CPU Air is available in three configurations, a horizontal low-profile tower (TOUGHAIR 110) for small form factor systems, and then as a vertical tower in single fan (TOUGHAIR 310), or dual fan (TOUGHAIR 510) configurations. Today, we’ll be taking a look at the flagship model, TOUGHAIR 510, that runs $59.99 shipped over at Amazon. 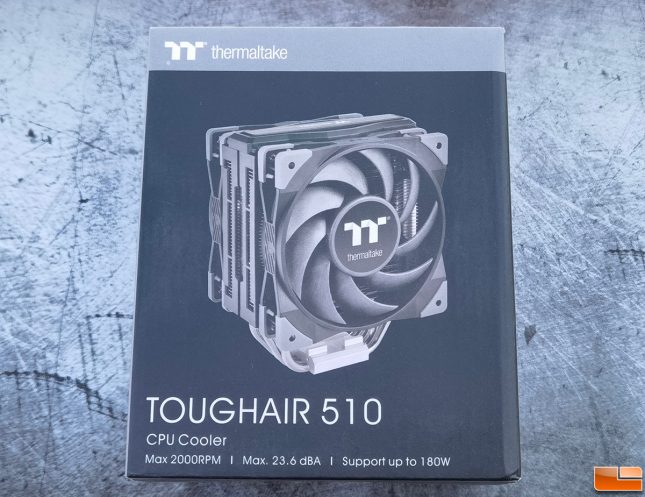 This model works on the latest Intel and AMD series processors as long as they are under 180W. The TOUGHAIR 510 CPU cooler has a 10W higher power rating thanks to the dual 120mm fan design. Thermaltake ships two TOUGHFAN 12 models with this kit and each has a fan speed of up to 2000 RPM. 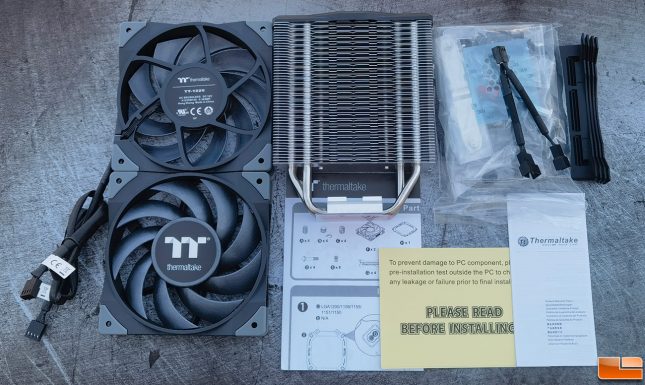 Inside the box you’ll find the TOUGHAIR 510 CPU cooler, two TOUGHFAN 12 4-pin fans, instructions, Y fan splitter, fan mounts and a baggy of all the parts needed for the cooler to work on Intel and AMD sockets. These are the platforms that are supported by the TOUGHAIR 510: 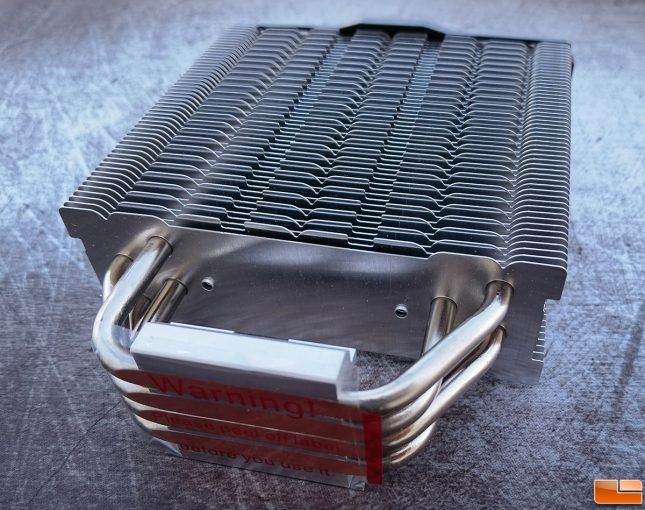 Thermaltake went with an asymmetric design structure to ensure good airflow through the towers cooling fins. This design also reduces the air turbulence for less noise and improved heat dissipation. 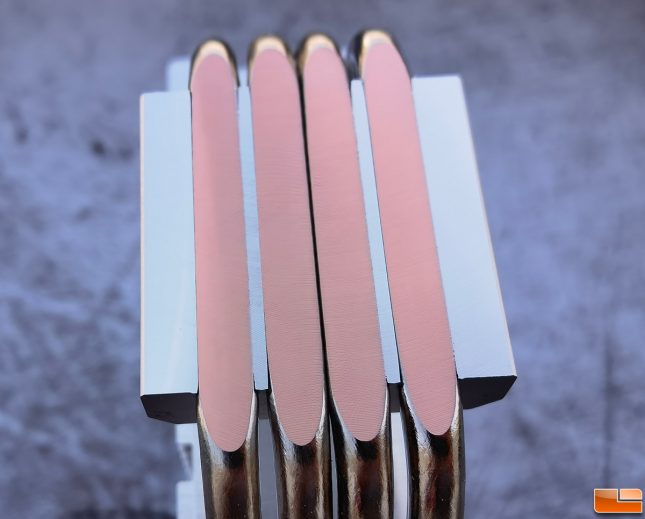 The base of the cooler was machined flat and you can clearly see that the four 6mm heat pipes make direct contact with the processor. The u-shape design on the heat pipes is a tried and true design that has been used for many years. 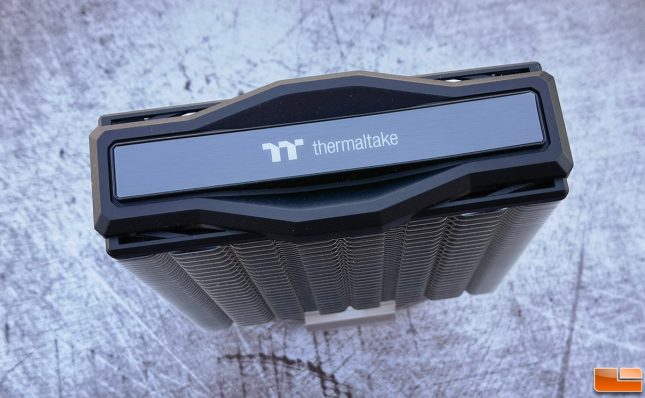 Appearance is subjective, but the top of the TOUGHAIR 510 looks good and should work in the vast majority of gaming PC cases. The dimensions on this cooler are 123.6 x 98.8 x 159.5 mm ( L x W x H) for those that want to ensure this HSF will fit before they order it. 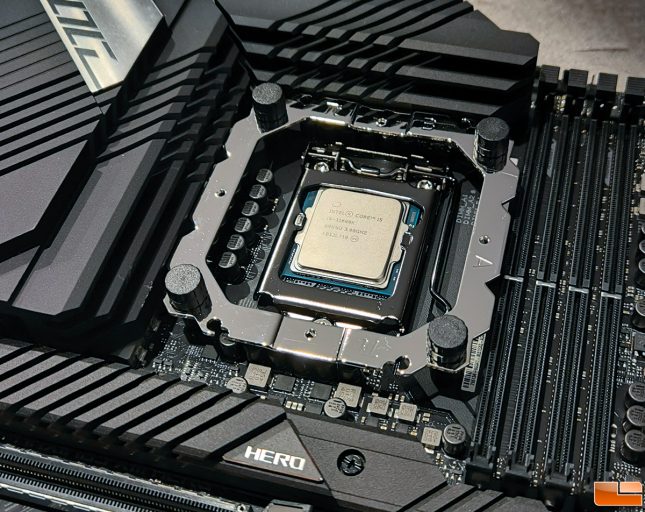 To check out the performance of the TOUGHAIR 510 we will be trying it out on the LGA1200 platform with the new Intel 11th Generation ‘Rocket Lake-S’ desktop processors. Installation is pretty straight forward and you can actually download the Thermaltake installation guide for this HSF assembly here. You basically put some standoffs through a backplate and then flip the board over and put on standoffs, a top plate and then secure it together. A simple process that takes a couple of minutes. 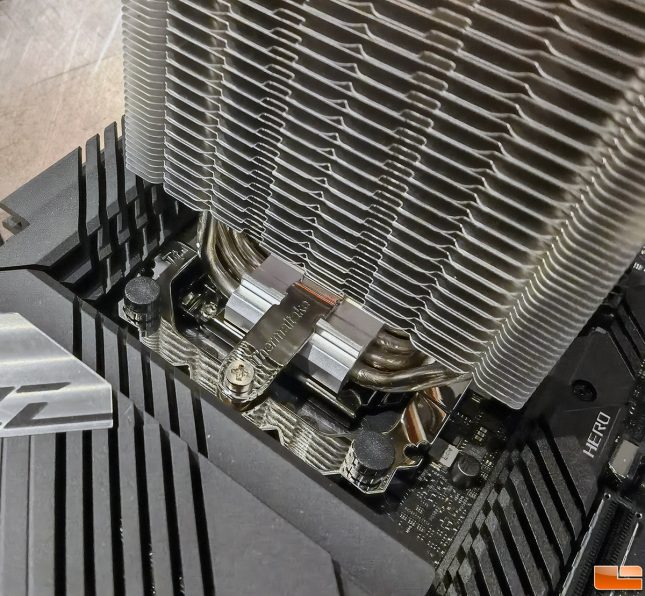 After that you apply the included thermal paste or one of your choice. Then you sit the heatsink on top and secure it with two screws that are already in the main bracket. 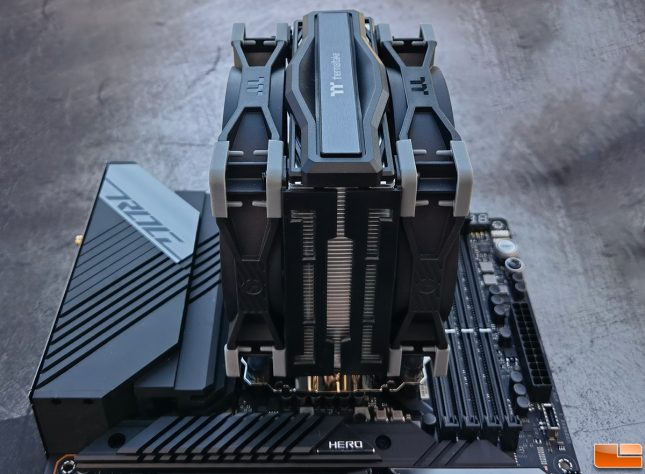 Next you need to put on the fan brackets, snap the fans on and use the 4 Pin PWM fan splitter cable to connect them to your CPU fan header on your motherboard. None of the memory slots were blocked on our ASUS ROG MAXIMUS XIII HERO motherboard. We also like the look of the cooler as the black and gray colors will go with most gamers build and there is no RGB. Not everyone likes RGB, so this will be a plus to some.

To check temperatures on the TOUGHAIR 510 we used the just released Intel Core i5-11600K ‘Rocket Lake’ processor that has 6-cores and 12-threads. This processor has a 125W TDP and it has a wide range of performance boosting mechanisms. We tested using the high performance power plan in Windows 10 with ASUS multi-core enhancement (MCE) enabled in the BIOS. Enabling ASUS MCE ignores all Intel power limits and is a feature enabled by many enthusiasts and gamers. 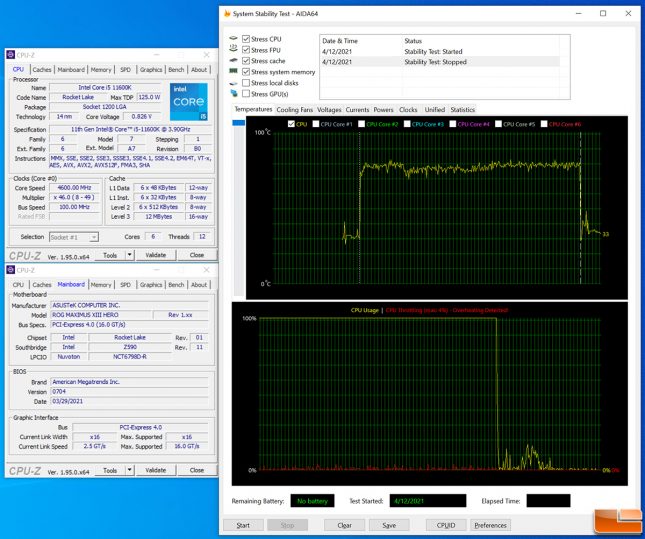 The Thermaltake TOUGHAIR 510 struggled a bit to handle the Intel Core i5-11600K processor as we did see thermal throttling. 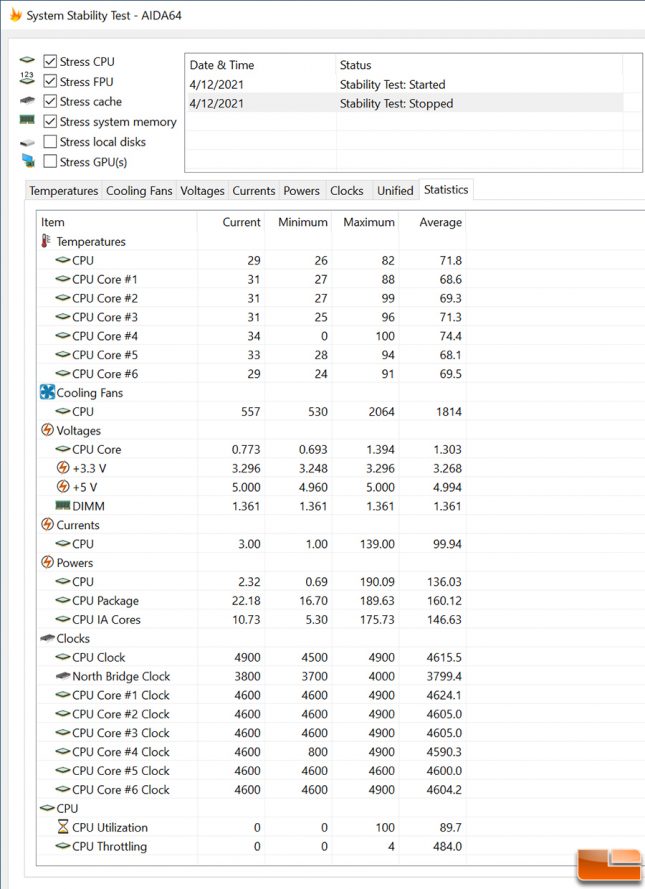 A closer look at the statistics of the AIDA64 System Stability Test showed that our processor temperature topped out at 82C. At idle we were getting between 29-31C. CPU Core #4 on our Intel Core i9-11600K was certainly the hottest core as it reached 100C. AIDA64 showed the CPU package power reaching 190 Watts, which is beyond what this 180W cooler is rated to handle. That is likely why the CPU cooler was slightly throttling on this workload. This processor has a 125W TDP, but clearly enabling ASUS MCE pushes that well past that official rating. 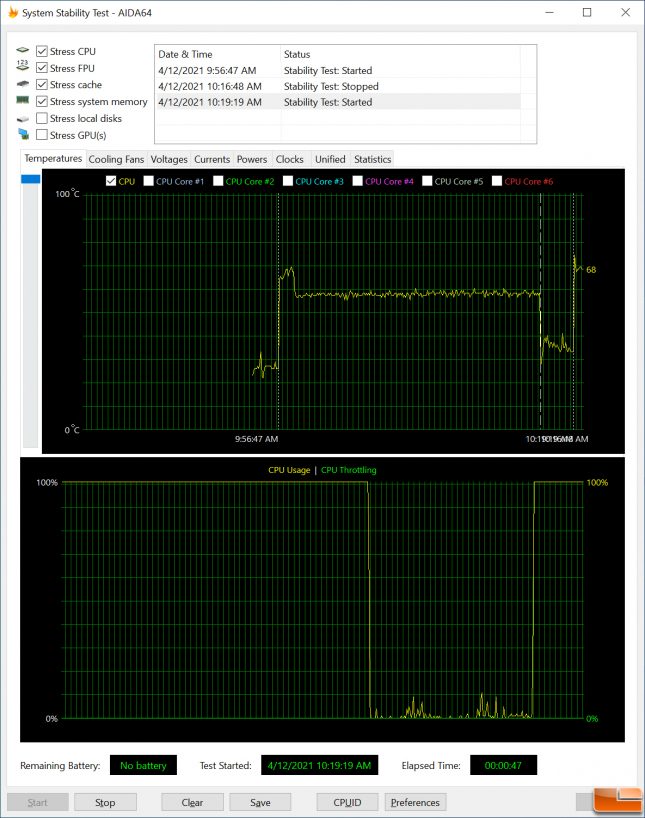 After seeing the throttling we went back into the BIOS and disabled ASUS MCE. We ran the AIDA64 System Stability test again and topped out at 69C during our 20 minute run. It was clear that the hottest CPU temperatures came at the beginning of the test while the processor was still running at the highest clock speeds. We started the test again after about five minutes of recovery time and it shot up from 33C to 74C. So, we are seeing about 69-74C for overall peak temperatures. 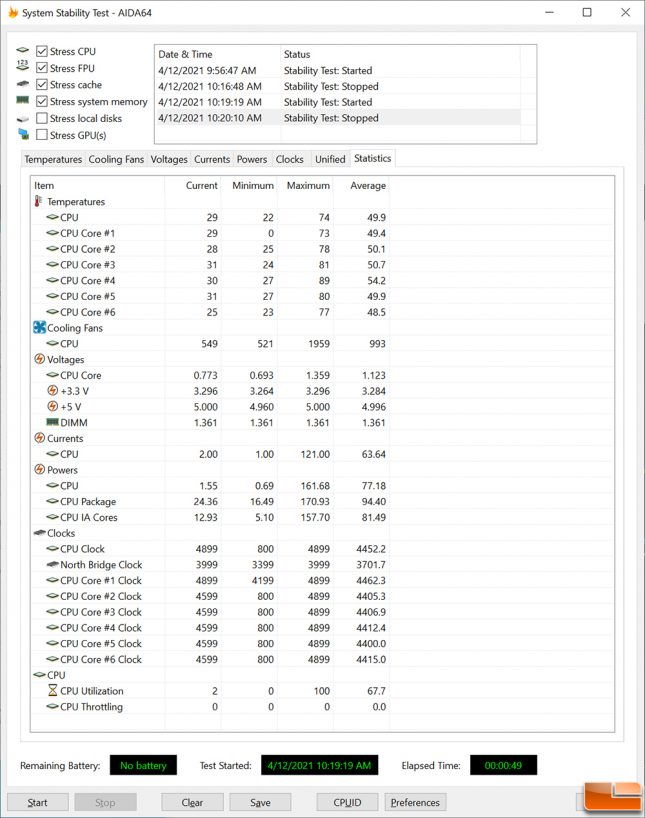 This time around the CPU power was at 162 Watts and the CPU package power was 171 Watts. No throttling was observed and the highest core temperature on any given core was 89C. The noise level of the cooler was acceptable as we were getting around 32 dBA at idle and 48 dBA at full fan speed. 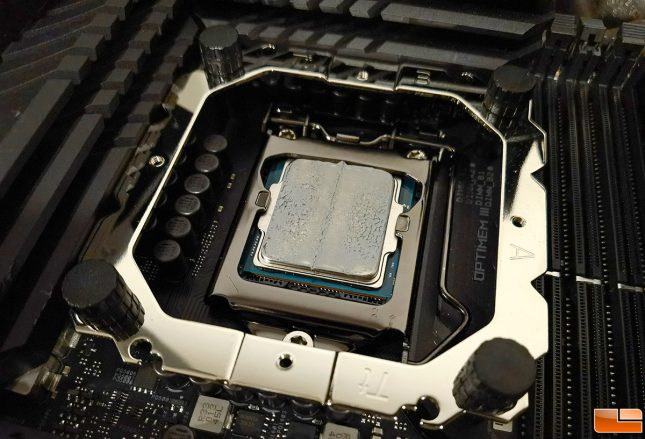 When we removed the HSF at the end of testing it looked like the Thermaltake TOUGHAIR 510 was making pretty good contact with the CPU. 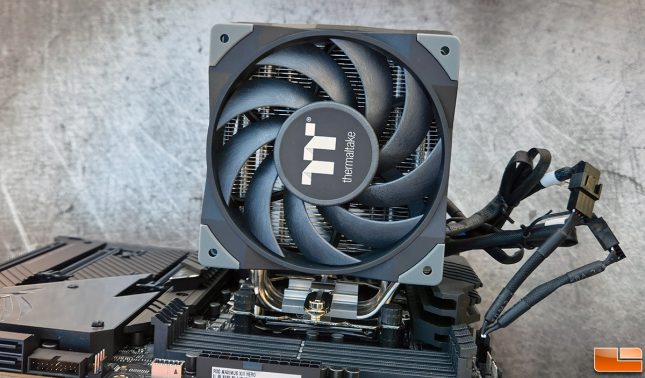 The Thermaltake TOUGHAIR 510 did a good job at keeping the stock Intel Core i5-11600K processor cool. Enabling ASUS Multicore Enhancement on our Intel Z590 platform with the Thermaltake TOUGHAIR 510 Air Cooler left us with a throttling CPU. So, this cooler gets the thumbs up for stock usage and the thumbs down for overclocking or running turbo speeds outside the Intel guidance.

You can purchase the TOUGHAIR 510 for $59.99 shipped over at Amazon. It comes backed by a 2-year warranty. It has no RGB lighting, requires no to special software to operate, and you don’t have to worry about liquid coolant issues. That will be appealing to some, but those with overclocking ambitions will want to stick to liquid cooling solutions.