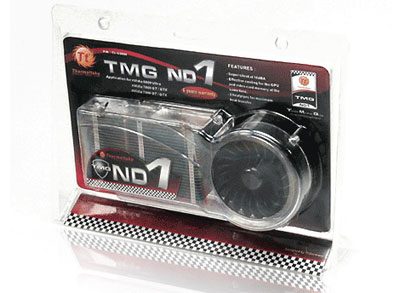 When I made the decision not to use water cooling on my video card any longer, I had to find a cooler that would fit back on my NVIDIA GeForce 7900GT. After making the dreaded trip back into the parts closet, I was able to dig up the old stock cooler that came on the NVIDIA card. I thought, “How loud could this cooler really be?” Within ten minutes of powering the computer on, I decided it was time to get another GPU cooler. I had completely forgotten how loud the stock cooler was on, and after being spoiled by water cooling, I needed something better than stock in terms of both performance and noise levels. 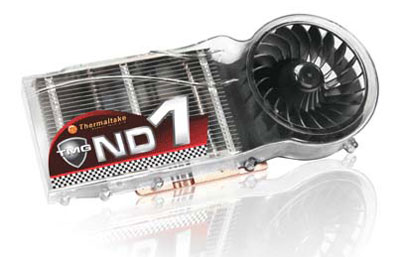 Being a college student, I have an innate ability to seek out the best bang for the buck. I quickly surveyed various online stores, and began searching for something to replace the hair driver that had decided to possess the stock cooler of my graphics card. I settled on the Thermaltake TMG ND1 for two reasons, it was cheap with an MSRP of $39.99 and it looked like the Arctic Cooling Silencer.

Before I ordered it though, I decided to look for some reviews online, to make sure I was indeed getting the best product. I, like most computer enthusiasts, have had the occasional bonehead moment where you forget to do your research and end up with a less than stellar product. I was shocked to find no reviews online. I logged onto my usually enthusiast forums and again was greeted with no threads and nobody at all talking about this product. So I begrudgingly purchased the cooler and set out to chart my own territory.

Was my purchase a good one? Well, I guess you’ll just have to read on!