Thermaltake has been building some quality aluminum tower cases lately and today we’ll be given the opportunity to swim with their SHARK, aluminum full-tower. The semantics behind the name have less to do with the predatory reputation of the fish and more with an entity which has attained an evolutionary plateau. Thermaltake’s SHARK lives up to its aquatic reputation in that it’s designed to house Thermaltake watercooling products (as well as other water-cooling systems). Today were going to look into model VA7000BWA, the block aluminum version featuring all the accoutrements the devoted PC-enthusiast and/or watercooling hobbyist could hope for. 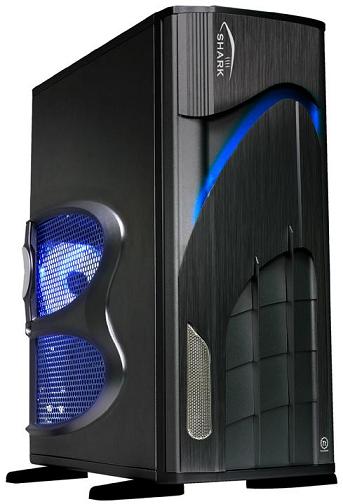 Thermaltake’s SHARK series is one of the most versatile Tower designs on the market today. The side panel features a “Honey-comb” viewing alternative which replaces the typical plexiglas window and allows further ventilation. Plexiglas is a better insulator then conductor of heat and in-so-far as case temps are concerned your better off eschewing a plexiglas side-window. Thermaltake’s solution is simple, effective and integrates EMI shielding. Below we’ve included a summary of the SHARK’s specifications.

Now let’s move along and take a closer look at our review unit.