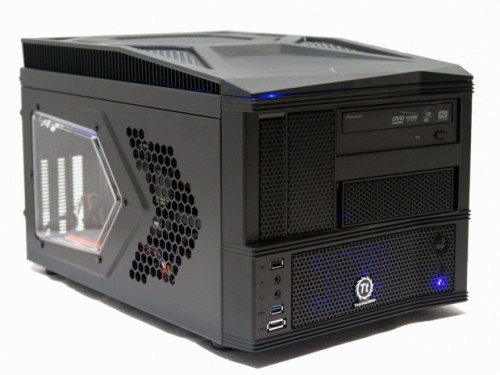 Thermaltake has been in the case game for almost 10 years now, launching their first case all the way back in 2002. With different designs, ideas, and form factors under their belt, in 2005 Thermaltake launched their first case targeted directly at gamers; the Thermaltake Armor. One year later they followed up with their first mATX case, the Lanbox and then Lanbox Lite.

Fast forward a few years and Thermaltake revamped their Armor Series in both design and features; we at Legit Reviews got to look at the first two cases, the Armor A60 and Armor A90. Following the naming tradition, at 2010’s Computex, Thermaltake announced the Armor A30 . Today we get a chance to look at the A30, Thermaltake’s new case designed for gamers looking to travel with their case to the next big gaming event. Currently this case is priced at $109 with a 3 Year Warranty.

If I do say so myself, that’s a pretty impressive array of features for a small case, but often the issue of small cases is that it’s hard to fit that much hardware into a small form factor. We’ll see if this case can do the job. They also seem like they’ve thought out some other design features of this case, letting it hold even monster graphics cards like the HD5970 & HD6990.  Although, CPU Cooler height is limited to 90mm and there are no spots to mount an internal radiator or all in one system like the Corsair Hydro Series or the Antec Kuhler H20 units.