Today I’ll be sharing with you my thoughts and experience with the newest member of the Thermalright family, the XP-120 heatsink for sockets 478/939/940/754. Thermalright arguably makes the finest CPU heatsinks available. Among their quality CPU coolers are the SP-94, SP-97, and the SLK 948U. When you hear people talk about quality heatsinks, they are usually talking about Thermalright products, or using them as a comparison.
Over the past year or so, several companies have released their own CPU coolers to capitalize on heatpipe technology. Most offer very good performance; some are even comparable to entry level water cooled kits. The problem is that with processors generating more and more heat, cooling solutions have had to become much larger, and with copper being the material of choice, larger means much heavier. It has become common to see many companies’s cooling solutions far exceeding the 450G weight limit recommended by Intel for their Socket 478 and AMD for their socket 939. Thermaltake’s newest entry, the SilentTower 4 in 1 CPU Cooler, weighs in at almost 3 pounds!!! Due to the overall weight of most heatsinks, companies have had to scale back the overall size of their products, thereby limiting the surface area to dissipate heat, and relying on more powerful and noisier fans to move the heat.
Now enters the XP-120, and its little brother, the XP-90. With the release of these two heatsinks, Thermalright has gone away from the mainstream and blazed a new trail. By using a mostly aluminum design on the enormous XP-120, Thermalright has been able to maximize the cooling surface and stay within manufacturer weight specifications without compromising performance. This new family of heatsinks uses the familiar Thermalright design of several fins welded to a base complete with multiple heatpipes, but curiously both heatsinks use a nickel plated copper base

Another benefit of a larger and lighter heatsink is the ability to use a larger and quieter 120MM fan (XP-120) and 92MM fan (XP-90). So now that you know the basics, let’s take a closer look at the Thermalright XP-120. 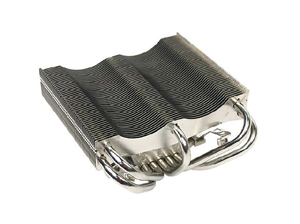 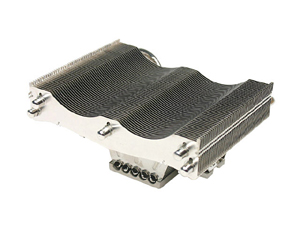 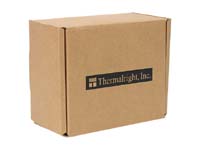 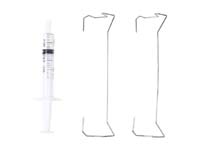 The XP-120 comes packed in the familiar Thermalright box, surrounded by foam padding and enclosed in a plastic bag. Included in the kit is a tube of generic thermal paste, a mounting bracket and two screws for AMD systems, the familiar wire fan retention clips that Thermalright uses with all their heatsinks, a strip of rubber material to mount on the heatsink to dampen the vibration of the fan, and of course an instruction page complete with diagrams for both Intel and AMD systems. The XP-120 I received had 5 heatpipes welded to a nickel plated copper base and 52 aluminum fins.

My first thought was that this thing is huge! Easily dwarfing the SLK 948U that it will be tested against, I was worried that there might be a problem installing this heatsink on some boards. As huge as this thing is though, it is noticeably lighter than either the stock heatsink/fan combo or the SLK-948, weighing in at an incredibly light 370 G (heatsink only)! One problem I had right away was that my test sample did not have a protective film over its base, and in fact had a few scratches and gouges. I’m sure this isn’t typical of Thermalright products as I own several myself and have always been happy with the packaging of their products.

There is a lot of debate as to the thermal properties of heatsink materials. Some people swear by an all copper design. Copper does a better job of “conducting” heat than aluminum, but conversely, aluminum does a better job of “conduction” or conveying heat than copper. I found this surprising as I always thought that copper had better thermal properties than aluminum. So in theory, having a much larger surface area to displace heat, using aluminum fins, and having a copper base should give the XP-120 an advantage over its copper finned Thermalright cousins. Adding to the positives are the lightweight design and ability to mount a more powerful and quieter 120MM fan. This left me with only one concern that I couldn’t answer. Why, instead of a copper base, did Thermalright use a nickel plated base for the XP-120? After all, nickel has nowhere near the thermal properties of either aluminum or copper, and as I just pointed out, copper “conducts” heat better than aluminum. Wouldn’t it make more sense to use a copper base with aluminum fins? Let’s find out.

Although the XP-120 can be used on either an Intel or AMD system, I will be mounting it on an AMD Socket 939 for this review. Because it uses the stock backplate, I had to remove my motherboard (I have been happily using Thermalright’s SLK-948). After mounting the bracket on the motherboard the installation of the heatsink itself was extremely fast and painless. The XP-120 uses four retention hooks to secure the heatsink to the motherboard. To me at least it was very similar to the Socket A retention system, except that this secures itself to the bracket instead of the socket itself.

After an extremely fast and easy installation to this point I was stopped dead by the installation of the fan. First, my test sample only had one strip of the vibration dampening material. Worried about how it would seat, I just left it off for now. I have never had a problem in the past with Thermalright’s fan wire clips, I have read where others haven’t been so lucky, either breaking fans or gashing fingers when a clip slid off the fan. When mounting the 120mm fan to the heatsink, you need to make sure you use a fan that has separate plates, not a solid design as the wire clips only snap onto the lower base plate, not over the entire fan. Not having a fan that met these requirements, I was forced to improvise with a hack saw and a Dremel tool. After 10 minutes of work I had a fan that would fit perfectly on the heatsink.

People concerned about this heatsink fitting on their motherboards needn’t worry, the XP-120 is tall enough to fit around most anything on your motherboard. In fact, my only concern would be some chipset coolers on certain motherboards. For instance, you might have issues mounting this heatsink on an ASUS A8V with a Swiftech MCX-159-R chipset heatink because of both the height of the chipset cooler, and the chipsets proximity to the CPU. People using ABIT’s IC7-Max3 might also have issues with this heatsink and that boards O.T.E.S. mosfet cooler. Aside from the issue with the fan clips, this was an extremely easy installation.

For this review I will be comparing the XP-120 to the stock AMD heatsink/fan and Thermalright’s SLK-948U with a Panaflo 92MM fan. Tests will include idle temperature 30 minutes after a “cold boot” and 10 cycles of Sisoft Sandra’s CPU Burn-In for the load temperature.

I was very impressed by the cooling of this heatsink. You might look at the temperatures and say “Thats nothing special”, but I would also like to note that besides cooling much better than the stock AMD setup, the XP-120 also was extremely fast at returning the temperature to idle levels after finishing its run under load. While both other HSF took more than 5 minutes to return to idle temps, the XP-120 did so in about 2 minutes!

Before I touch on anything else I would like to address the problems I had during installation. First, even without the dampening material, the noise generated by the Thermaltake 120MM fan was very minimal and not caused by vibration, simply by the movement of air.

After conversing with Chris from Thermalright, I found out there was a predistribution problem with the wire retention clips. this problem was corrected before any XP-120s were shipped for distribution, but somehow my sample snuck through. My problem is an isolated case and one consumers needn’t worry about.

I would also like to point out another benefit of the size of this heatsink and the usage of a 120mm fan. Because of its height and the area covered, the XP-120 also blows fresh air onto all the components surrounding the CPU. I think this could be extremely beneficial if you were able to add some heat sinks to some of those surrounding components, maybe some Microcool universal heatsinks??!!!

Overall I have to say that I am extremely impressed with the Thermalright XP-120, it was much quieter than, and cooled every bit as well as the SLK-948U, and much better than the HSF AMD supplies with their processors. I am still rather puzzled by the nickel plating on the base as I believe copper would yield better results. Overall this is an extremely good cooling solution that is for the most part easy to install and very quiet.

I have no trouble at all recommending the XP-120 to anyone looking for a quality cooling solution. The XP-120 provided comparable temperatures to its copper cousins, but it gains another vote for the light weight and the ability to use 120mm fans, which make it quieter than most any other air-cooled solution currently available.