In late March we covered the launch of the 7600GS. The 7600GS addresses what is likely the most important part of the market, the budget line. The NVIDIA GeForce 7600 GS is a single slot card that features a 400MHz core clock speed with a GDDR2 memory clock speed of 400MHz (800MHz double data rate). The 7600 GS features 5 Vertex shading units with a total of 12 pixel shader pipelines. This is the same number of shading units and pipelines found on the GeForce 7600 GT, so the only difference on the card is the clock speeds and the memory type used. Thanks to the lower clock speeds NVIDIA has been able to get the peak power consumption down to 32 Watts from the 67 Watts found on the 7600 GT. This is big news for those wanting a silent cooling solution and for those in the HTPC market.

The 7600GS that we recieved from XFX is a little different that the reference model, let’s take a look at what seperates the two. 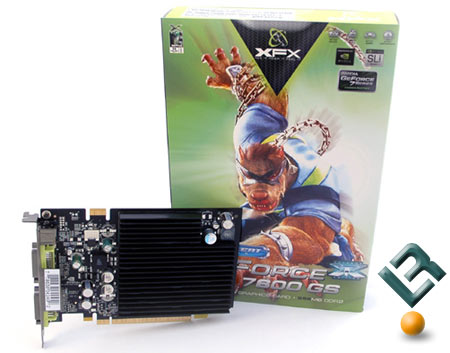 As you can see, the XFX card is quite a departure from the normal green PCB, DVI and VGA output 7600GS. The PCB is coated in black and features dual “XFX green” DVI ports. In this reviewers opinion the appearance of the card is quite striking, I really like what they’ve done with the coloring on this video card. XFX also adorns a few of their 7900GT’s with this same color scheme for anyone who likes this look but in need of a little more gaming power. 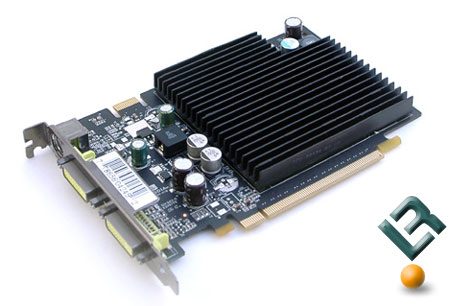 If you were thinking this card from XFX was all show and no go then you’d be wrong. XFX has also stepped up the clock rates of this Xtreme Edition from the standard 7600 GS. GPU core speeds have been increased from 400MHz to 500MHz while memory speed is up to 900MHz from the 800MHz of the reference design. This is a healthy boost for both and will surely give you just a little more gaming power and still keep the card fan free.

XFX has decided that despite the increases in clock speed that the reference passive heatsink will still be fine for their hot rod 7600 GS. You can rest easy that if for some reason that something should happen that XFX backs up each and every one of their video cards with a double lifetime warranty. A double lifetime warranty means that XFX will repair and service your 6-Series or 7-Series Graphics Card for as long as you own it. All you have to do is register the card with them. And, should you sell or transfer the card, XFX will honor the warranty for the card’s second owner, too, as long as they register it online.

Now that we’ve had a look at the 7600 GS, let’s see if it has what it takes to compete with the other cards on the market. If you would like more information on the 7600 GS video card please read our preview here.