Last month in the 8-way SLI and Crossfire Power Supply (PSU) Roundup we found that not every power supply makes the cut on the high end gaming systems that we used for testing.  One of the power supplies that ended up in our yellow caution zone was the Ultra X-Connect X2 550W power supply. Ultra was logically unhappy with where their product finished in our review. After the article was published Ultra Products started to get feedback from our readers and their current customers. They then took the time to duplicate our test systems in their labs, minus the AGEIA PhysX card, and believe they found the answer to why it didn’t do so hot.  It was determined that the 12V might have dropped as much as it did because it had very little load on the 3.3V/5V rails.

Ultra goes on to inform Legit Reviews that we need at least a 4A to 5A load on the 3.3V/5V rail since we were going to put as much as a 37A load on the 12V rail. So in other words, Ultra said their power supply might actually perform better with four hard drives hooked up to it than it would with just one. Since we tested with only one hard drive this could be the case and since Ultra was concerned with our findings we went back to the test bench and installed three more Western Digital 250GB hard drives.

At idle each Western Digital Caviar SE16 hard drive comes with a rated power dissipation of 8.75W at idle. By using three of these hard drives at idle and one under load (9.5W) we are able to add an additional 26.25W load on the system with most of it being on the 5V rail. When at idle each hard drive pulls 730 mA on the 5V rail and 430 mA on the 12V since the hard disk is spinning, so these four drives will add more stress to the 5V rail. To help balance the load better like Ultra suggested we added another 2GB kit of Corsair XMS2 PC2-6400C3 memory running at 2.2V, which pulls off the 3.3V rail. With three more hard drives and two more sticks of memory in the system we tried to see if the 12V rail would remain more stable. 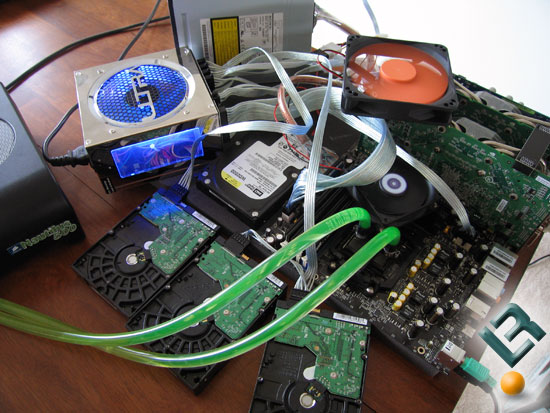 The second time around we changed a few small things on the test system that are worth noting before moving on. We ended up upgrading the processor from an AMD Athlon X2 5000+ to an AMD Athlon 64 FX-62 and went from 2GB of memory to 4GB running at 3-4-3-9 2T timings at 2.2V. We played a music CD on the optical drive, ran one instance of Prime 95 and ran Futuremark’s 3DMark06 benchmark all at the same to time get our system running at nearly full power. We then tested the platform with one hard drive and then all four hard drives on the system.

Ultra was able to go out and duplicate our system builds in the lab and found that the 12V dropped on their units also. They believe that it might have dropped as much as it did because it had very little load on the 3.3V/5V rails. Ultra suggested using more hard drives and devices that would put more load on these rails and when we did the 12V rails on the X-Connect X2 550W power supply dropped from 12.04V to 11.46V, a decrease of 0.58V (-4.8%).  These are not the results that Ultra claimed to see in the test lab and while we were looking to see improved numbers that’s not what we got.  Still I was impressed how the X-Connect X2 550W power supply was able to handle a 635W load without crashing even though it’s rated at 550W by Ultra.

To give Ultra some credit here, this power supply is only rated to run CrossFire on the ATI CrossFire family of cards up to the X1600 series and on the nVidia 6 series for SLI users I have also tested this power supply on the same exact test platform with a pair of GeForce 6800GT’s and found the 12V rail dropped from 12.02V to 11.73V (11.71V with 4 hard drives) during testing. This is still a rather large drop and more than we’d like to see in a power supply.

In closing, while this update didn’t find a flaw in our testing method and bring Ultra X-Connect X2 550W power supply out of our caution zone it did show Ultra is working with the enthusiast community.  Our contacts at Ultra have informed us that they are working on bigger and better power supplies and this article has helped Ultra figure out what to look at in future power supply models.  By doing our roundup and this update, it shows that Independent Voltage Regulation is something that might need a closer look in upcoming power supplies. I’d like to point out not many companies are as open and understanding as Ultra when it comes to something not going perfect. Working with Ultra is breath of fresh air, so to speak, and if all goes as planned the consumers will win in the end!