The Geek Atlas: 128 Places Where Science and Technology Come Alive

A 524 Page Travel Book For Geeks

This past weekend I found myself wanting to sit down and read a good book. I picked up a copy of The Geek Atlas last month, but never got around to actually reading it. The Geek Atlas is more or less a travel guide for those interested in science, math, and technology. The book covers 128 places where science and technology come alive (if you are a computer geek the number 128 will instantly stand out to you like a secret sign, if you are not you’ll have to buy the book to find out why). The book is broken down into chapters by location and then the significant technological advance that was done there. Each chapter is broken down ever further into two parts. The first part of each place would be a historical and general description readable by anyone, the second part is a detailed explanation of the actual science, technology or mathematics behind the place. This format is actually rather nice as the general reader could skip past the detailed explanations and still enjoy the book if they aren’t interested or already know the information. 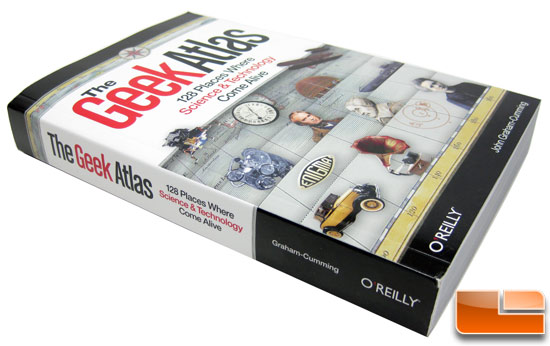 Here is a brief product description on The Geek Atlas.

The history of science is all around us, if you know where to look. With this unique traveler’s guide, you’ll learn about 128 destinations around the world where discoveries in science, mathematics, or technology occurred or is happening now. Travel to Munich to see the world’s largest science museum, watch Foucault’s pendulum swinging in Paris, ponder a descendant of Newton’s apple tree at Trinity College, Cambridge, and more. Each site in The Geek Atlas focuses on discoveries or inventions, and includes information about the people and the science behind them. Full of interesting photos and illustrations, the book is organized geographically by country (by state within the U.S.), complete with latitudes and longitudes for GPS devices.

You won’t find tedious, third-rate museums, or a tacky plaque stuck to a wall stating that “Professor X slept here.” Every site in this book has real scientific, mathematical, or technological interest–places guaranteed to make every geek’s heart pound a little faster. Plan a trip with The Geek Atlas and make your own discoveries along the way.

In the video clip above John Graham-Cumming, the author of The Geek Atlas, talks to Craig Smith of O’Reilly about Experimental Breeder Reactor No 1, Arco, Idaho, USA. This location is covered in chapter 96 of The Geek Atlas.

If you like reading books and love technology, then The Geek Atlas: 128 Places Where Science and Technology Come Alive, should be given a closer look. I’ve only been to four of the locations covered in the book, but after reading the book I look forward to visiting some more now that I know where they are. This book is ideal for the curious kid that loves technology or the mom or dad that loves science and traveling. I can easily see lovers of science and tech geeks devouring its pages and wanting more.