The Future Of Handheld Gaming: GoForce 5500

While walking the show floor at CTIA WIRELESS 2006 I ran across something I never expected to see at this wireless telecommunications show, Quake 3 running on desktop monitors. After seeing several booths showing off the same mobile phone running streaming TV I thought that was going to be the highlight of the show for me, but I was wrong. It turned out that the booth I was standing in front of was that of NVIDIA and as a gamer I found something worth looking at. 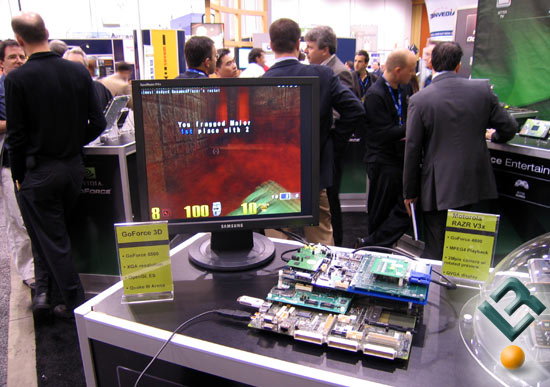 Intrigued by this odd site (see above) and even stranger looking platform that was running the time demo I thought I’d see what was going on. It turns out that it was NVIDIA’s latest mobile graphics processor, the GoForce 5500, running a number of heavy 3d applications on an ARM11 development platform powered by one of Freescale?s i.MX31 applications processors. NVIDIA was able to run their GoForce 5500 on this platform and got Quake III Arena running between 28-35 frames per second at a VGA resolution of 1024×768. NVIDIA informed us if they ran the demo in XGA that the frames per second would decrease to around ~22FPS.

Are you amazed yet? If you are an NVIDIA fan and know a bit about their past product lines think of a GoForce 5500 as a Geforce 2 GTS desktop video card from years ago stuffed into a handheld device.  The GoForce 5500 runs at 150MHz or 200MHz depending on the voltage that the handheld maker wants the chip to use. The GoForce 5500 comes with 640K of embedded SRAM, but can run up to 32MB of external memory if needed. It seems that today’s latest cell phones have the graphics power that some of you might have in your personal systems at home!  Let’s see what NVIDIA is now stuffing into cell phones. 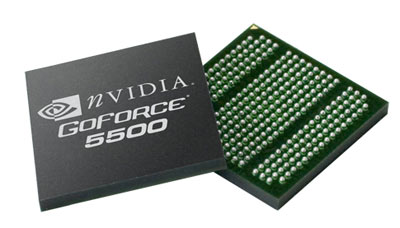 Many of you may not know that NVIDIA is making strides in the mobile market with the NVIDIA GoForce product line.  The GoForce  brings advanced multimedia features?video conferencing, streaming video, photographic-quality 3D, and image capture?to handheld devices such as mobile phones and PDAs. The GoForce series has been around for some time and many of the popular phones today are running GoForce chips.

Let’s move on and take a look at the NVIDIA GoForce 5500 features, which is the latest and greatest mobile GPU.