Chevrolet is showing off some of the vehicles that it will have on display at the SEMA show in Las Vegas. But, by far, the coolest of them all is called The Chevy Beast. It looks like it was ripped out of the latest Halo video game, and while it looks like fiction, it’s made using mostly off-the-shelf parts.

The Chevy Beast is built on a customized Silverado frame that has been shortened and beefed up to survive high-speed off-road racing. It’s got a custom suspension system and gets power from a 650 horsepower supercharged V8 engine. The engine is paired with a 10-speed automatic transmission. 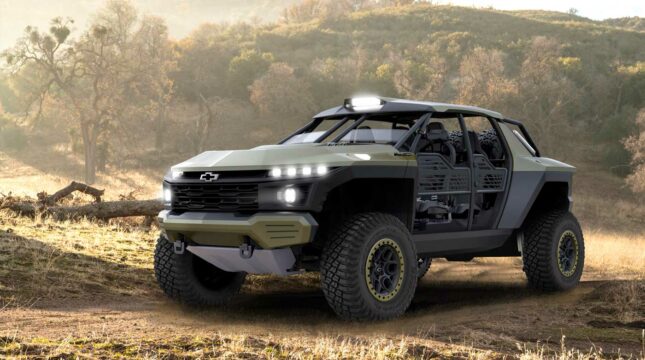 Chevy says most of the parts used are available from Chevrolet Performance. It has a tube frame roll cage and wears custom pickup bodywork. Chevy fitted it with beadlock wheels and 37-inch off-road tires.

One of the parts that anyone can buy is the Chevrolet Big Brake Upgrade Kit helping to slow The Beast down. It features spare tires mounted in the bed and looks fantastic all around. The truck is a concept and isn’t destined for production.