The ASUS AT3N7A-I Motherboard Gets A New Fan

The Loud 40mm Fan Gets Replaced

While building our NVIDIA Ion powered mini-itx computer system we found that the fan used to cool the Intel Atom 330 processor and Nvidia Ion chipset was a bit louder than what we expected from our prototype ASUS AT3N7A-I motherboard. ASUS said they agreed with the feedback that they were getting from review sites and changed the fan that will be found on the retail models. They also sent us the new fan to give it a test drive, which is exactly what we did. 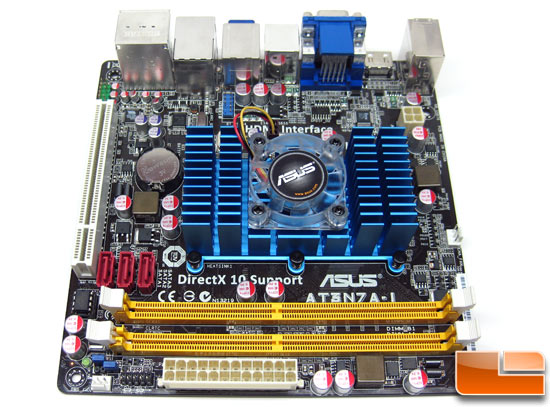 The 40mm fan on the ASUS AT3N7A-I motherboard is made by EverFlow, runs at ~6400RPM and can be annoyingly loud if you don’t like fan noise. ASUS promised us the new fan would be quieter since it would spin slower, but it would have a negative impact on cooling since it didn’t have the same airflow ratings. 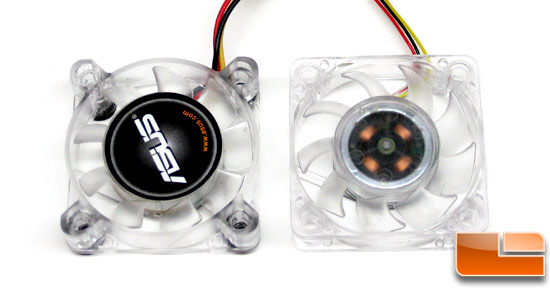 The original 40mm  fan that came with the new ASUS AT3N7A-I motherboard is shown on the left and the new replacement fan that should be shipping on all of the retail boxed versions is sitting on the right.  Both fans are EverFlow model R124010SL 40mm fans, which is interesting as the only thing they have in common is the fact they both have nine blades. The plastic housing, fan length/pitch, motor and gauge of wiring is different between the two fans.  The new fan runs at ~4100 RPM instead of 6400 RPM, so let’s see what that decrease in speed does to cooling and the noise level of the system. 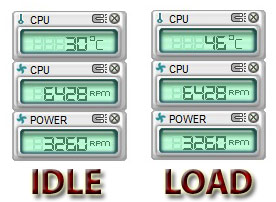 To see how hot the Intel Atom 330 CPU would get we downloaded ASUS PC Probe II V1.04.76 and fired up the utility to monitor fan speeds and the CPU temperature. The original fan on our ASUS AT3N7A-I Motherboard was spinning at over 6428 RPM, so its no wonder the system was so loud. The CPU temperature at idle was a very nice 30C due to this though.  The little NVIDIA Ion powered system hit just 46C under full load when running the blended Prime95 torture test. 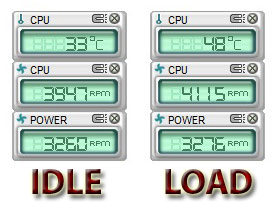 The new fan spins more than 2,000 RPM slower and is quieter, but this does come at a cost to as cooling performance is slightly decreased. We observed the system being 2-3C hotter than the previous 6400 RPM fan. 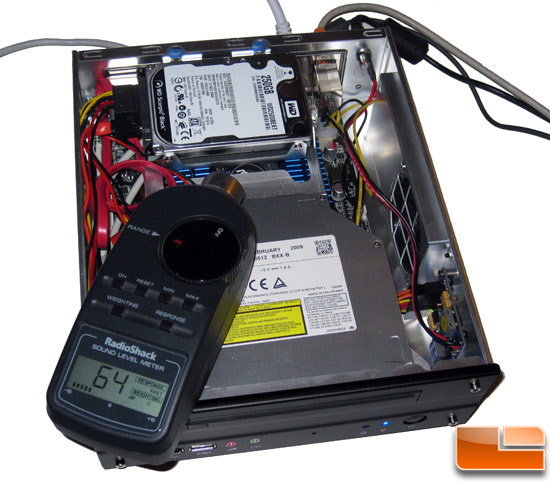 With the original 40mm fan spinning at ~6400 RPM our sound level meter showed the system humming along at 64 dBA. 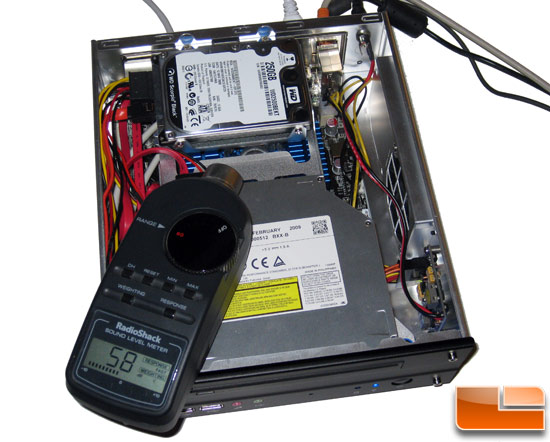 With the new 40mm cooling fan installed in the system the noise level dropped to 58-59 dBA, which is a decrease of 5-6 dBA.  The fan was still a little loud for our tastes though.  You just can’t do that much with a 40mm fan.  It would have been nice to see a new heat sink design that supported a 60mm fan though. 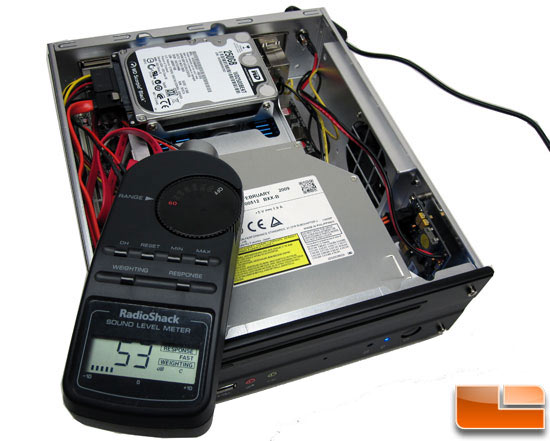 Trying to get the largest sound reduction possible we unplugged the 60mm case fan that comes with the Travla chassis and sure enough the noise level dropped another 5 dBA.  This is a decrease of 11 dBA, which is a significant decrease in noise from where we first started.  With the case cover installed and sitting several feet away the system is much quieter than before! Most people use a mini-ITX motherboard for a HTPC of for an office solution, so having lower noise levels is always a good thing for a motherboard like this. Still the new fan is an improvement and should be okay for 99% of consumers looking for a mini-ITX motherboard like the ASUS AT3N7A-I.